Sound source not in a straight line with the sound receiver - does that make a difference? 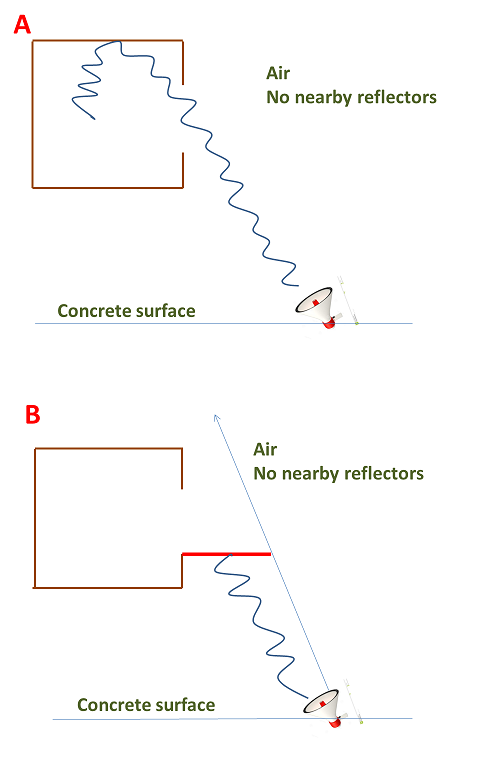 Hope the graphics will help me explaining my question better. Let's say the box would be a room in the fourth floor, and the sound source would come from cars in the street. It is clear that in case A the sound would enter the room and would be clearly heard from the human ear.

What I am interested to inspect is case B. The red line there represents a sound-proof shield. The shield would block the direct sound geometrically as you see. In front of the flat there would be no nearby building that could bounce the sound back to the room from the other direction. So, there is just air. I know sound is not a bullet that travels in straight line, so my question is: Would there be a significant decrease in the sound heard inside the room if a sound-proof shield would be placed as in the picture in case B? Can we calculate a rough percentage?

The situation you are describing is an example of Fresnel diffraction (or near-field diffraction).

In general, when a wave propagates every point of the wave front can be thought of as its own source of waves traveling in all directions (called Huygens construction). It turns out that neighboring point sources along an infinite straight wave front reinforce the "forward" direction only, but if you put an obstacle in the way you can see this diffraction.

The mathematics needed is simplified when you look at the effect of this diffraction "far away" (far compared to the wavelength of the wave). In the case of sound, a frequency of 55 Hz (low end of the range of sounds you hear) has a wavelength of about 6 m, so on the scale of your drawing diffraction would occur.

This explains why you can hear the thumping bass of a loud car stereo before the car turns the corner, and only make out the song when the car is in sight.

The calculation of relative sound level into the room as drawn is tricky - it involves an integral that is usually evaluated using a graphical technique called the Cornu spiral, and strongly depends on dimensions and frequency. But as a rule of thumb, "high frequencies travel straighter". And "sound barriers" do work (somewhat) to reduce nuisance noise (for example the noise of cars speeding along a highway).

If you want to estimate the attenuation, you will find this link has some helpful equations and graphs.

There is a problem with the link given: it defines the Fresnel number as

But has a confusing definition of $d$. To make things work, you need to set the straight line distance from source to receiver to $D$ (not $d$). If you do that, then

and the Fresnel number is

You will benefit by finding some tutorials on wave theory. In brief, assuming a spherical wavefront from the emitter, you are correct there's no direct path to the receiver. However, the edge of yourabsorber there causes diffraction (Huygen's principle), so thatsome of the sound wave (energy) will make its way to the receiver. You can see a demo of this, e.g., at mike-willis tutorial .

Not the answer you're looking for? Browse other questions tagged waves acoustics geometry noise or ask your own question.

2
Does altitude affect sound pitch?
3
Why is sound intensity proportional to the square of sound pressure not to sound pressure alone?
2
Using sinusoids to represent sound waves
35
Why does medium not affect the frequency of sound?
2
Why does sound not travel between media?
3
Why does the classical Doppler formula make a distinction between movement of the source and movement of the receiver?
0
Duplicating the sound source
1
Relation of power and intensity of sound/point source wave with distance travelled
82
Why does fire make very little sound?
2
Echoes and Pitch Change