What is a Null Geodesic? [duplicate]

What is a Null Geodesic? My textbook only explains it as the Minkowski metric which equals to zero, but I'd appreciate a more detailed explanation.

A null geodesic is the path that a massless particle, such as a photon, follows. That's why it's called null, it's interval (it's "distance" in 4 D spacetime) is equal to zero and it does not have a proper time associated with it.

When they are drawn on a spacetime diagram, they are the edges of the light cones, as in the picture below, the lines at 45 degrees. 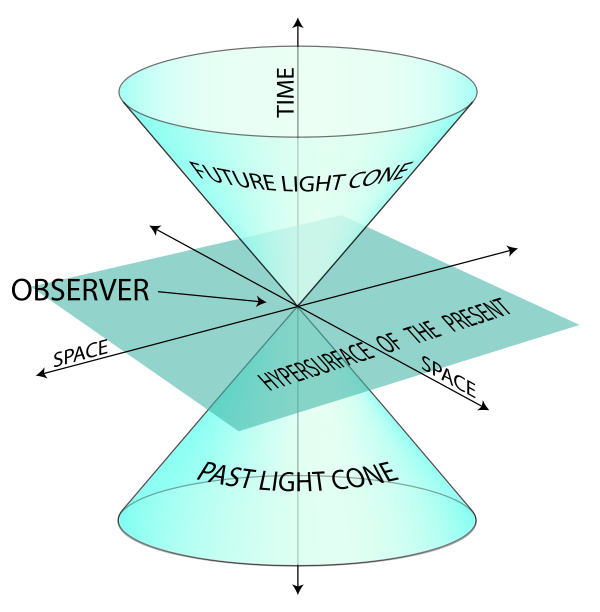 When a space-like interval separates two events, insufficient time passes between their occurrences for there to exist a causal relationship crossing the spatial distance between the two events at the speed of light or slower. Generally, the events are considered not to occur in each other's future or past.

Geodesics are the shortest path between two points, a straight line, in flat space at constant velocity, but in curved space (General Relativity) it won't normally be a straight line, as least not in the way we think of a straight line in the ordinary world around us.

Have a read of this link.

The null geodesics are exactly the paths that light rays may take (while matter travels on geodesics with time-like tangent vectors).

Not the answer you're looking for? Browse other questions tagged general-relativity differential-geometry definition geodesics or ask your own question.

16
Why is light described by a null geodesic?
1
Source of Light bending