Is the Earth the center of the Solar System? [duplicate]

Alright guys, so I attracted you with the title. Now, to preface the question, I am fully aware of the work of Copernicus, as well as the concepts of Heliocentrism and Barycentric Coordinates. I have a master's degree in Engineering, and have taken many a course in dynamics and kinematics. It is with this experience that this question arises.

When studying bodies in motion, it is customary to pick a stationary reference frame for the basis of your calculations. Since the Sun is extremely massive compared to the rest of the planetary bodies, the barycenter of the Solar System (the stationary origin of choice) is extremely close to (and often inside) the sun. Hence why we commonly say that the planets all revolve around the Sun.

Although this certainly simplifies drawings of the planetary orbits, allowing for mostly non-intersecting ellipsoids in modeling, the base reference frame is, for all intents and purposes, arbitrary. All motion is relative to it's observer, so who's to say we cannot define the origin to be at the center of Earth? Sure, children would no longer be able to make working models out of hangers and Styrofoam balls, but wouldn't the equations of motion remain the same?

I have been searching online for a video, or gif, that illustrated this principle, but was unable to find anyone who took the time to do so. I'd be very interested in seeing what the orbits actually looked like if we re-defined the stationary reference frame from the barycenter to the center of the earth. I'm sure the orbits would look pretty rad! Much like 1:40 into this Solar System Orbit Video.

Is there something I'm missing that would theoretically preclude us from doing so?

Ah hah! Finally found a video that shows this simulation.

You certainly could define your origin of coordinates to be the center of the Earth. It would be a little tricky, because this would no longer be an inertial frame of reference, so there would be fictitious forces (or Coriolis forces). That is, your equations of motion would no longer look the same.

One reason the standard barycenter frame of reference is useful is because there are no external forces acting on our Solar System. (Well, there are, which is why we orbit the galaxy for example, but we can usually ignore such forces.) And because there's no net force, there's no net acceleration, which means that the barycenter frame is inertial.

And if you also want to keep the Earth still in your new reference frame (like in that video), then you would also need to rotate the coordinates, which would involve standard Coriolis effects. You're starting to see why we don't normally do this. But the orbits certainly would look pretty rad. In fact, as observers on Earth, we actually see how they would look, and that's why we see apparent retrograde motion.

Back before Copernicus (Or rather, before his view was accepted), we used to think the earth was the center of our solar system.

Therefore, if you search for those models, you can find examples such as: 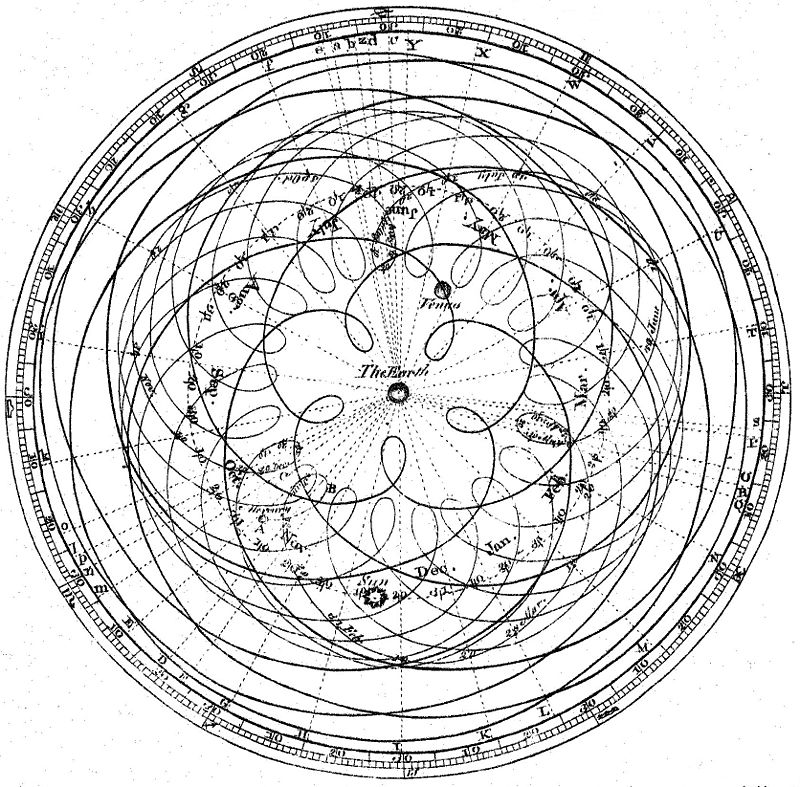 This is, of course, based on observations rather than calculations, but it represents the complication of the solution nonetheless. (Image taken from wikipedia)

Not the answer you're looking for? Browse other questions tagged newtonian-mechanics orbital-motion earth sun inertial-frames or ask your own question.

59
Why do we say that the Earth moves around the Sun?
16
What is the simplest way to prove that Earth orbits the Sun?

2
Laws of dynamics and reference frame
0
Why Copernicus frame can be considered to be inertial for planetary motion?
3
Gravitational slingshots and energy conservation
0
How do I calculate evection and variation for the moon in my simple solar system model?
0
How does the Sun's gravity affect the shape of the orbit of the Moon around the Earth?