Why are we not able to visualize Dimensions beyond 3 (or maximum 4 including time)?

Why can't we experience them like the first three dimensions?

The usual explanation is that these additional dimensions, if they exist, are tightly curled up or compacted. Humans can't move around in them like we can move through the three "normal" spatial dimensions we are familiar with.

Why are we not able to visualize Dimensions beyond 3

Also our major senses, our eyes, are intrinsically two dimensional. Information about the third dimension has to be synthesized in our brains. Proprioception is, I suppose, provides three dimensional information - but we rely on that less.

First of all, we can project four-dimensional objects onto three dimensions, and then further project those onto 3 dimensions. See https://en.wikipedia.org/wiki/Tesseract The picture shown in this article is itself a 2D image, but you can surely make a 3D version of it.

Second, there is a pretty standard way of graphically representing arbitrary $n$-dimensional real vectors — using a bar chart. The discrete $x$ axis in this case corresponds to coordinate indices, while the continuous $y$ axis represents the values of corresponding components. This would be a picture for a vector in $\mathbb{R}^6$: 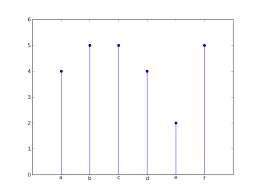 You may argue that this representation, unlike drawing an arrow, is very sensitive to basis changes, but this would not be fair, as we are simply more used to arrow rotations.

Importantly, the suggested representation is incredibly powerful in the sense that it immediately allows one to trace the connection between finite- and infinite-dimensional vector spaces. Indeed, if we agree to put all the $n$ components of a vector on the interval $\overline{AB}$ of a fixed length along the $x$ axis, it will become clear how in the limit $n\to\infty$ a finite-dimensional vector turns into a continuous function. In this case, $x$ simply becomes a continuous index! Furthermore, this illustration naturally explains the definition of scalar product of two real functions, $\langle f|g\rangle=\int_{A}^B f(x) g(x)\operatorname{d}x$ it is no more than the generalized component-wise product.

Why are we not able to see beyond three dimensions?

This is perhaps a philosophical question rather than a mathematical one, we do not expect to give a full answer, even though we hope to clarify some ideas. In addition, we would like to provide a new perspective on the subject. We will find curious analogies with the way we perceive color and make some imaginary experiments showing that, even living imprisoned in three dimensions it could be different.

I don't know why we would consider that other dimensions are curled up and so small that they aren't observable or detectable. We don't think of time like that. It exists at every point in space but doesn't occupy any space. My thought is that 3 dimensions are all that are needed to describe/identify physical objects and their relationship to other objects of mass. Time is a dimension needed to differentiate those objects that are not static. So other dimensions can easily exist at every point in space and time but are not physical like maybe electromagnetic force or gravity os possibly a spirit realm.

Not the answer you're looking for? Browse other questions tagged spacetime-dimensions perception visualization or ask your own question.

6
Is time fundamentally different from space?
6
Why is space-time four dimensional?
10
How do we know the laws of physics remain the same in different dimensions?
1
Travel and locate extra dimensions