Why do two flames kept side by side merge into a single flame?

I have read about why a candle flame is in the shape of a tear drop in the presence of gravity. The top portion which is sharp is directly above the wick, where the soot particles from the wick rise up due to buoyancy and burn.
However, when I keep two flames side by side, with a space of about 3mm between the actual yellow boundaries of the two flames, I observe that the two flames are trying to get merged and the widths of the flames increase in order to mix with each other.

When I bring the flames a little closer to the point where the initial yellow boundaries would have just touched, there is only a single flame now, a much bigger tear drop and the highest "sharp" point being right in the middle of the two candles/lamps.
Could someone please explain this.

I did some experimenting (playing ? :-)).
The effect is "ill conditioned" and, while the result when the wicks are in close proximity is always a joined flame, the results when the separation is increased slightly is very 'time variable'. Using even quite thin candles (thicker than tapers - about 10mm od) flame proximity could not be got close enough to cause flame joining when the bodies were vertical. I angled two candles (see photos) and mounted them on bases which allowed X (and Z) separations to be varied. I took about 90 photos. Best results for this purpose seemed to be given by using flash to give basic image and reducing shutter speed below what would usually be used to get a degree of time averaging of the flame motion. At higher shutter speeds a flame that was flickering and that visually looked far taller than when the candles were widely separated, was almost always far shorter in the photos than it appeared to the eye. At shutter speeds of 1/20s or longer the perceived and photographed flames appear similar.

I believe that the mechanisms that I described originally (material below) were generally correct but the impression given by experiment is that heat transfer between flames is the main factor in flame growth which escalates into flame combination at very low separations.

Apart from flame size there are no apparent gross indications of decreasing proximity. Flame colouration on the lower curve of each flame on the side facing the other candle tends to change, with more of the red outer layer that is consistently seen further up the flame, but this effect is variable with flame flickering from air currents or flame interactions.

At very low separations and prior to joining, flame sizes suddenly increase substantially and flames may become very unstable with pronounced interactions between flames, but also may coexist stably for extended periods. [Somewhere in Brazil the Lorenz butterfly is enjoying itself]. 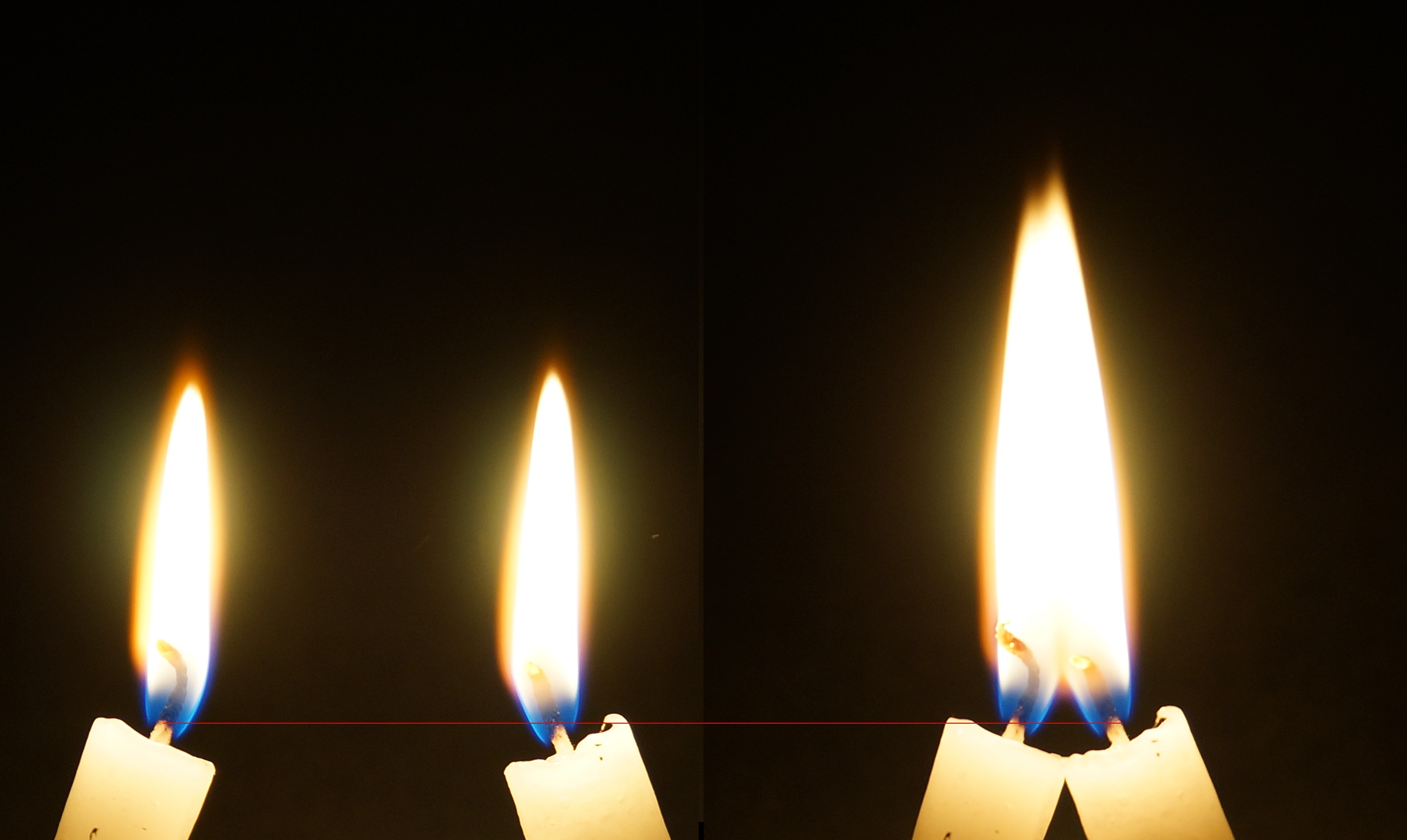 In the the region between the two candles a number of effects combine to produce increased vertical gas flow (of both air and combustion products) and higher temperatures at a given height. This raises the height of the combustion zones compared to elsewhere in the flame and the results are "regenerative" and continue until a steady state is reached. Factors which cause the above temperature rise and increased flow include:

The flame radiates energy down into the 'wax' below it causing it to melt (aka solid to liquid phase change). The liquid is drawn up the provided "wick" by capilliary action until the closeness to the combustion zone raises its temperature to vaporisation point (aka liquid to gaseous phase change).

For an isolated ideal symmetrical candle with a vertical wick in otherwise still air, cool relatively dense air flows into the combustion zone equally from all sides and hotter, less dense combustion products become 'buoyant' due to density differences and as incoming air is entering from all radial directions, the hotter gases rise vertically above the centre of the candle. Fuel feed is vertical into the combustion zone, air feed is horizontal (& radial inwards) into the combustion zone, and the logical and only place left for the hot less dense combustion products is 'up'. Radiant energy escapes radially in a rotationally symmetrical pattern as light and heat (the two are the same in nature, being differentiated only by wavelength). The radiant energy output is not symmetrical when viewed in cross section due to the flow of reactants, changes in temperature and varying opacity of the flame zone.

Because the flame zone is "rotationally" symmetrical, it appears the same from any radial direction, but to a radially positioned observer (the safest place to be when looking at a candle) it appears wider than thick (ie wide and flattened in depth) as the width of the combustion zone is easily seen, but the depth is hidden by the 'flame'.

A non ideal candle may not be truly symmetrical and the wick may be at an angle and fuel flow up the wick may not enter the zone symmetrically relative to the candle body, but the above affects are observed to occur 'well enough' in everyday candles.

When d is large the two candles burn independently and appear as before.
As d is diminished the air between the two candles starts to be affected by both flames. Instead of drawing air from infinity, the centre air must be fed from "either side" of the centre line, as "there is a candle in the way out towards infinity". Also the air between the candles starts to be preheated by two sources of radiation rather than one so is hotter than at other points the same distance from a candle centre. As d is decreased the increase in air temperature near the common zone becomes increasingly hotter than elsewhere so air starts to rise convectively sooner prior to meeting the main combustion zone, so that combustion happens higher up in the inter-candle region. This effect can be seen quantitatively in this crop from the main image below.

As d is further reduced to say under a body diameter there is no air path from the direction of the other candle and all air along the joining line must enter approximately tangentially. The incoming air is substantially preheated both by radiation and by gases carried into this hotter faster rising zone from further around the candle and as d further decreases any point in the inter candle region becomes essentially indistinguishable from a point at somewhat less distance from the centre elsewhere on the circumference. At low enough separation's two unavoidably become one.

This image is non ideal but shows in the inter candle zone: 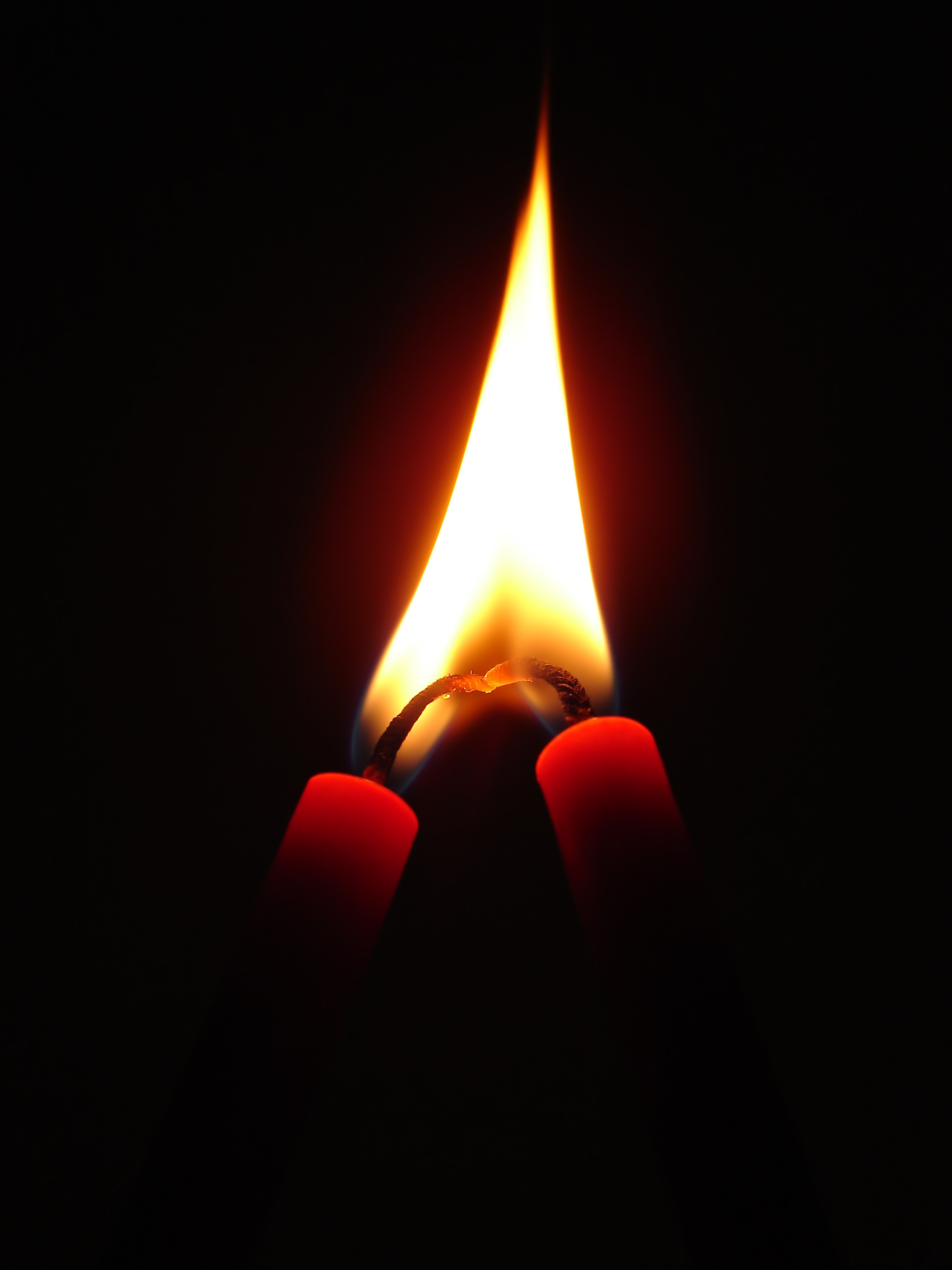 Image is from here unrelated - Wikipedia.

And many more. Larger version here about 3000 pixels wide - enough to see most usefully, should anyone care.

Because of Bernoulli's principle. The same thing happens between two moving vessels. And between two sheets of paper, if you blow. 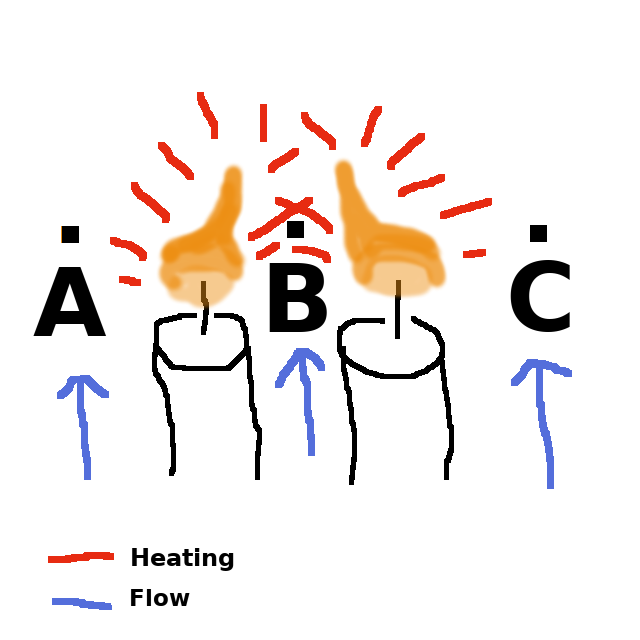 The main point of the Bernoulli's principle is: higher speed - lower pressure. Warm air moves up. Speed depends on heating. A candle heat air around (A, B and C). But the (B) spot is heating by two candles simultaneously. Thus, the B flow is faster than the A and the C. And, following the Bernoulli's principle, pressure in the B spot is lower than pressure in the A and the C spots. This way, pressure of the A and of the C moves flames to the B.

Not the answer you're looking for? Browse other questions tagged thermodynamics combustion or ask your own question.

9
Why does the majority of smoke leave when flames appear?
16
Why is the bottom part of a candle flame blue?
1
Why do things catch fire from flame more easily than from a hot object?
5
Why are candle flames ellipsoidal?
0
Why did these stalagmite-like structures form on the side of my candle?
120
Why does the humidifier make a stove's flame orange?
0
Why does the flame of a gas stove not spread backwards?