Why the speed of light in vacuum is same in all inertial reference frames? [duplicate] 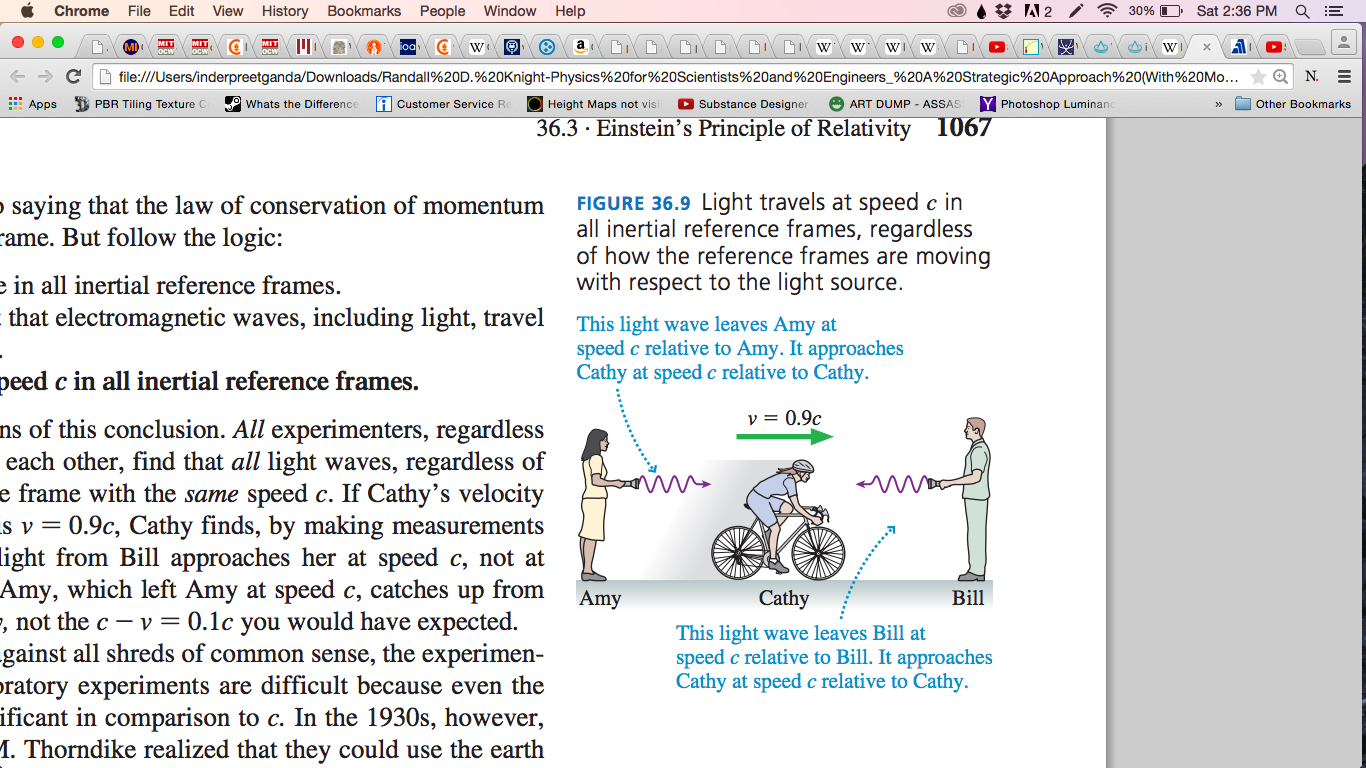 If Cathy’s velocity toward Bill and away from Amy is v = 0.9c, Cathy finds, by making measurements in her reference frame, that the light from Bill approaches her at speed c, not at c + v = 1.9c. And the light from Amy, which left Amy at speed c, catches up from behind at speed c relative to Cathy, not the c - v = 0.1c you would have expected.

My question is why speed of light is same in all inertial frames (as in this example)? I know this is true from observations, but HOW ?

That the speed of light is a fixed constant in all inertial reference frames is a consequence of Maxwell's equations of electromagnetism (assuming that two other standard constants, $\mu_0$ and $\epsilon_0$ are, in fact, non-zero constants).

Thus the propagation of the electromagnetic wave in a vacuum occurs at the finite speed $c$. This is independent of inertial reference frame, in particular.

This was originally kind of shocking, as this was definitely not what Newtonian mechanics had led them to expect. One of the proposed resolutions of this was that there was some yet unperceived ether which served as a universal reference frame, and it happened that Maxwell's equations took their simplest form in this frame, leading to the above calculations.

The Michelson-Morley experiment disproved the existence of the ether. It was Einstein who is credited with taking Maxwell's equations, and the derivation above in particular, at face value. That the speed of light was a fixed, finite constant in all inertial reference frames was the foundation of Special Realtivity.

In some sense, this shifts the question from "why is the speed of light constant and finite" to "why are those other two constants finite and non-zero, and why Maxwell's equations...etc.". As CuriousOne says in his comment, at some point this deviates away from science and into philosophy. That point is usually taken to be when we hit the mathematical foundation of what we're using. We have created mathematical models to explain observations, and these constants and Maxwell's equations are such models. There is no "why" to answer there other than "it's been working really well so far, so until the Universe starts doing something weird enough that we can see, we'll stick with it".

Let's do a thought experiment. We'll prove by contradiction, that the speed of light must be the same in all reference frames.

scenario: you're sitting in a train travelling at the speed of light. There's a mirror in front of you, inside the cabin of the train.

question: Will you, or will you not see your reflection in the mirror?

Answer: It's a logical paradox. If we assume that light adds according to the same classical laws of addition of speed, then from the frame of reference of the ground, the light leaving the body, and heading towards the mirror, will travel at the speed double that of "normal" light(c). It'll head towards the mirror at 2c, and since the mirror is travelling at c, it'll bounce back with speed 2c-2c=0c. But since light having no speed will have no energy(light is after all, a wave), this means that it cannot carry any information, and thus you will not see your reflection in the mirror. But, we also know that if you're moving with a constant speed with respect to an inertial frame, all the Maxwell's laws should stay the same, and thus you should see your reflection. A contradiction.

And as for why the actual, unchanging speed is what it is? It's an empirical observation. Attempts have been made to explain it, but so far all those theories have not been proven experimentally.

This is an interesting philosophical question(IMHO). In physics, we don't prove theories to be right, but we do prove theorems about the math used to hold together our theories. Which theories are right is determined by mere phenomena. We have to develop them together out of observation and mathematical logic.

The key logic behind Special Relativity was that Maxwell's equations for electromagnetism looked like exact, universal laws of physics, and their solution gives light waves with a universal speed. Now it was logically possible that those laws were only true in one special reference frame, but by 1905 no experiment (including the famous attempt by Michelson and Morley) provided any evidence that they failed to work in any inertial frame. Einstein showed that there was a logical, consistent framework (Special Relativity) in which Maxwell's equations worked in all inertial frames, and Newton's laws also almost worked for any objects moving slowly with respect to a frame. From this new framework, all sorts of other effects could be derived, and they were all confirmed by the observations that followed. Among those many effects are the energy-dependent lifetimes of particles, the exact dynamics of fast-moving particles, the patterns of radiation from accelerating particles, the magnetism-like velocity-dependent term accompanying each fundamental force and so on and so forth.

Ultimately, then this framework ran into trouble with gravity and had to be replaced by General Relativity, which in turn probably will now be ultimately have to be replaced (maybe by something like String Theory) in the near future to explain more things.

So in one sense- we don't prove things the way mathematicians do, but instead we have to rely a lot on what we actually see and observe. In another sense - we aren't generalizing from one isolated fact, but fitting a huge collection of diverse observations precisely to an extended logical system.

tl;dr- It's an empirical observation. We haven't proved it until now.

It is that the speed of light is the same for all inertial frames that causes Special Relativity, not the other way around. As to why it is the same, nobody knows. Or why it is a finite value. There is some speculation about quantum gravity and a magical æther called spacetime, but nothing has been proven yet.

55
Why and how is the speed of light in vacuum constant, i.e., independent of reference frame?