Where are the poles in a magnetic field generated by a current carrying straight conductor?

Where are the poles?

There are no poles in a magnetic field generated by a current carrying conductor.

With permanent magnets, magnetic poles arise from the illusion that the magnetic field starts at the north pole and ens at the south pole. It's an illusion, because magnetic fieldlines are always closed (contrary to electric fieldlines that do originate at a positive charge or end in a negative charge). The magnetic field of a magnet seems to end in the south pole, as you can't go inside the magnet and see how the field is overthere, but actually, it continues and it appears again at the other side of the magnet at the north pole:

The magnetic field of a straight conductor is concentric around the conductor, so the fieldlines don't seem to start or end anywhere, so there are no poles. 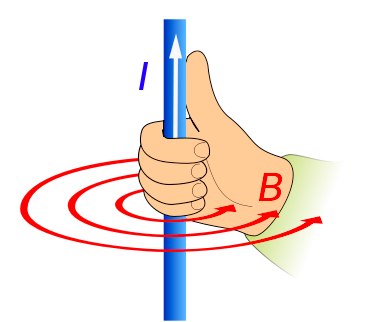 In a more mathematical way, two of Maxwell's equations say just the same:

facts:1.Pole is defined as the region at the ends of a magnet where the external magnetic field is strongest. 2. poles are of two types: the North seeking pole of a magnet will be it's North Pole and the south seeking pole will be it's south Pole. how we found the poles of a magnet in school: a compass needle was extensively used by us at school to find out the pole of a magnet and the direction of the magnetic field lines. When sufficient number of field lines had been traced... It would be found that they seem to emerge from a certain point... Conventionally taken to be North Pole of the magnetic... And terminate at another point called the south Pole. **coming to your question **1. when the same treatment of moving a compass needle around a straight current carrying wire... Its found that the magnetic field lines are made up of concentric circles. These field lines don't seem to emerge from anywhere neither do they tent to terminate anywhere. (in case of a solenoid/circular current carrying loop... the field lines seem to merge somewhere as illustrated in this

But there is an other way to induce magnetic fields. Whenever electrons get accelerated in curved trajectory their intrinsic spin get aligned (gyroscopic effect) and the magnetic dipole moments - which are related to spin - get aligned too. The sum of this magnetic dipole moments is the magnetic field, for example, in a coil. On the other side there is the effect of self induction in a wire when the current increases or decreases.

But there is one more effect. A magnet near a current carrying wire influence the magnetic dipole moments of the electrons in the wire. It is a self-reinforcing process too. The question is, could one differ between this self-reinforcement from an external magnet and the declared magnetic field that has to be by itself around a current carrying wire.

5
Force between two point charges moving parallel to each other