Why is the excited state of 116 Indium more stable than ground state?

I found a diagram of the typical decay of the excited state of 116 indium to 116 Tin: 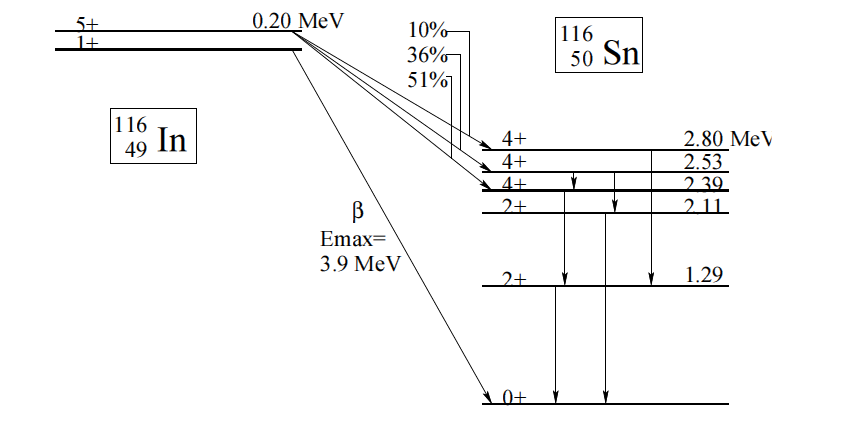 We can make the same combination angular momentum / energy argument for the beta decays. Beta decays are parity-violating: the electron tends to come out left-handed, and the antineutrino comes out right-handed. The two leptons are most likely to leave the nucleus without orbital angular momentum (that is, in an $s$-wave state), and if you detect them in roughly opposite directions then together they carry one unit $\hbar$ of spin. We therefore expect the beta transition to strongly prefer $\Delta J=1$ transitions. If the beta decay were to have $\Delta J > 1$, the leptons would have to be emitted with some $p$-wave or higher orbital angular momentum; those wavefunctions have much less overlap with the nucleus than the $s$-wave.

My golden-rule skills are too weak to make this argument quantitative; I'd love to see a definitive answer.

I'm not an expert on the notation, but I think the answer you're after is this info, from Trent U. Physics Lab Notes. Sorry about the loss of formatting.

13
Why some nuclei with "magic" numbers of neutrons have a half-life less than their neighbor isotopes?
30
What stabilizes neutrons against beta decay in a neutron star?
6
Energy balance for beta decay of cobalt-60
6
Why alpha decay usually leads to ground state while beta decay usually leads to excited state?
7
Have we found all stable nuclear isomers?
0
How to Clearly Define Sample Size in Half-Life Measurements?
1
Radioactive Tracer - calculate fraction that decay before excretion
5
Is there any simple way to predict beta decay half lives?
14
Why is nitrogen (with 7 protons and 7 neutrons) so much more abundant than any other odd-odd isotope?
3
How can there be more than one stable isobar for a given atomic mass number?