What, if anything, makes primary colours distinct?

In my capacity as a computer programmer I'm well aware of how these colours are used practically, and of how varying combinations of the three can produce any colour visible to the human eye.

However, it occurs to me that these are essentially three evenly spaced frequencies on the visible spectrum. I don't know of any scientific reason why these colours are used to combine light, or if they are distinct in any way.

You need to keep well in mind that the sensation of color is a semantic meaning that the human mind's processing attaches to the spectral content of light.

The mixing of "primary colors" was experimentally found (first by artists for red, yellow and blue with natural pigments, then later for, usually, red, green and blue by photography and color projection technologists) to reproduce the sensation that humans attach to color. Isaac Newton was one of the early experimenters who formalized the red, yellow, blue pigment standard. James Clerk Maxwell used red, yellow, blue filters in his early experiments with color photography.

Physically we can give the glib explanation that the wavelengths need to roughly match the peak sensitivity wavelengths and this is why red, green and blue scheme match the peak sensitivity wavelengths of the three kinds of cone receptors used to sense the spectral content of light. These sensitivity curves are shown below, taken from the Wikipedia "Spectral Sensitivity" page. As you can also see, each cones is not sensitive to one wavelength alone, so different spectral combinations of light can give rise to the same relative response of the three different kinds of cone cells. Moreover, the sensitivity curves differ from person to person, so one non-color-blind person can detect differences between spectral content that cannot be detected by another non-color-blind person and contrariwise. In particular, there are two distinct gene types encoding green reception, so there are two different green center frequencies. Which gene type you are sets whether you will perceive "aquas" as greenish blues of bluish green. 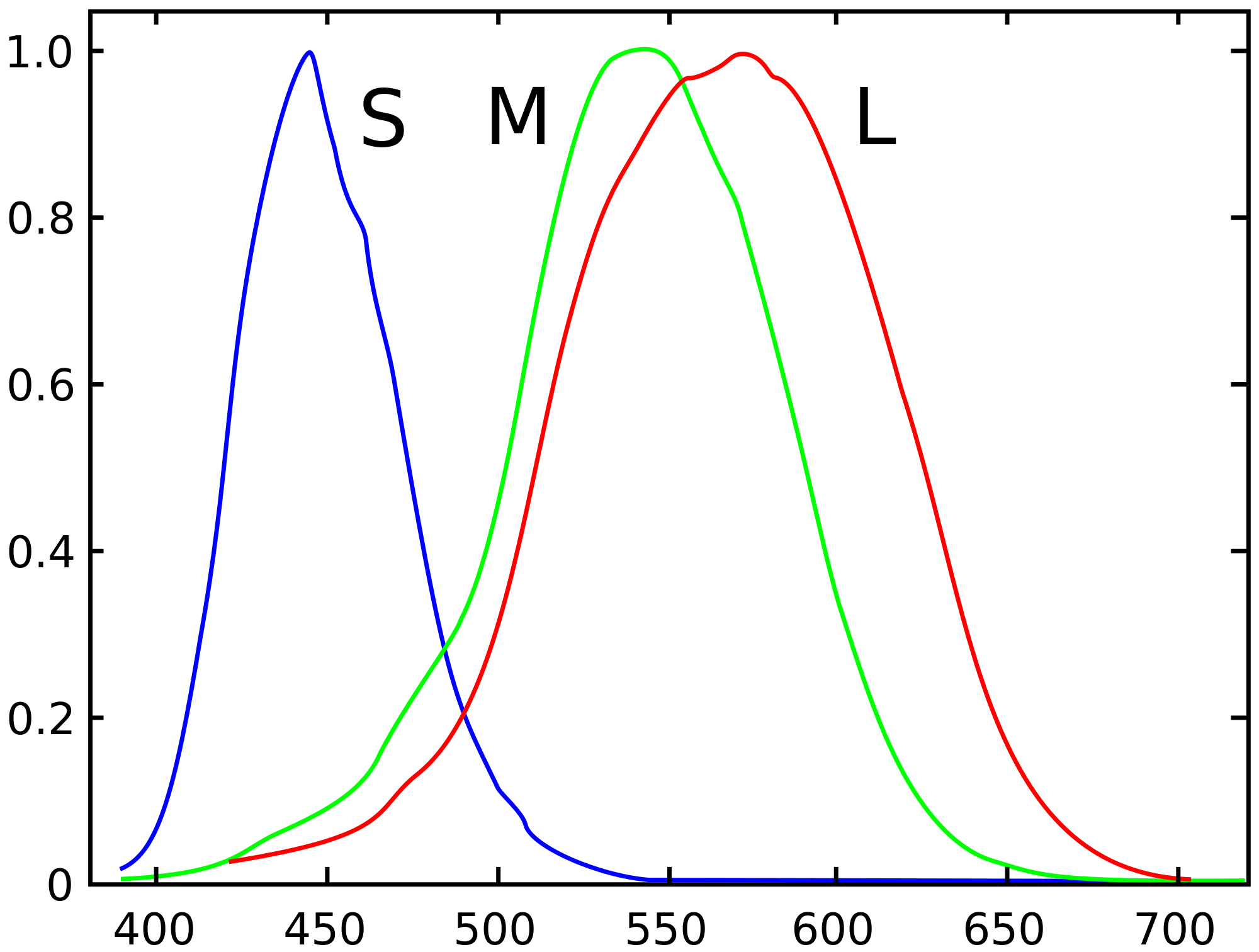 Many sets of different color primaries have been tried and all will work fairly well (another often used set is yellow, magenta and cyan). But because each cone is sensitive to a range of wavelengths as noted above, none can reproduce the full range of color sensation that any given human can perceive.

3
Is it only red, green and blue that can make up any color through additive mixture?
4
What was the motivation behind suggesting the trichromatic theory of vision?
0
Why does light have only 3 primary colours and why don't then non primary VIBGYOR colours disperse?

9
Why does mixing every paint colour produce gray instead of white?
64
How does light combine to make new colours?
0
What are the "real" primary colors and complementary color pairs?
0
Is there any difference in the colour of a 620 nm light and a 621 nm wavelength light?
1
Human colour perception – summary needed
4
Why is wavelength of violet colour less than wavelength of blue colour?
3
How does the cyan-magenta-yellow-key (CMYK) model work with printers?
2
Why does red and blue make magenta (a non-spectral colour), not green, while red and green make yellow, not (imaginary, non-spectral) reddish-green?