By what process did the era of inflation end, or has it just slowed down (a lot)?

Could someone please explain the current model regarding:

a) how the era of inflation was turned off (the graceful exit idea or alternatives)?

b) what the timeline is between the era of inflation ending and our current hypothesis that dark energy is promoting an expansion of the universe, (or at least the part of it that we are able to observe)?

In other words, although the initial velocity of spatial expansion has decreased dramatically from 14 Gyr ago, has inflation, in one form or another, actually stopped?

I realise that we normally simply define inflation as the expansion that occurred in the first tiny portion of the Universe's existence, but then what is our model for how (and when) a "slower" version of inflation started?

I have searched for duplicates on this site, especially regarding how inflation was "turned off" but can't find any.

Slow-roll inflation, which is one of the more popular models, has a well-defined mechanism for determining the end of inflation. Under this framework, we define two slow roll parameters, $\epsilon$ and $\eta$. Inflation is defined to end when $\epsilon=-\frac{\dot H}{H^2}\sim1$

Here, $H$ is the Hubble rate and $\dot H$ is its time derivative. Some simple math will show that this is equivalent to $\epsilon=1-\frac{\ddot a}{aH^2}$, where $a$ is the scale factor. So you can see that any time the expansion is accelerating, we will have $\epsilon<1$. However, given that our present value of the $\frac{\ddot a}{aH^2}$ term is so small, the present value of $\epsilon$ is still of order 1. This means we don't consider the current accelerated expansion to be inflation just yet.

Under this framework, it is easy to show that inflation did, in fact, end. The most commonly accepted models show that $\epsilon$ became order 1 after about 55-60 e-folds of inflation (an e-fold is the time it takes during inflation for the scale factor to increase by a factor of $e$). This corresponds to about $10^{-30}s$. After this point, the radiation and matter dominated eras ensued, during which the expansion decelerated, which you can clearly see would make $\epsilon>1$. So inflation clearly ended.

But I still haven't described the process by which inflation ended. That is because this process is heavily model-dependent. In slow roll inflation, we normally have an inflaton field and a potential function that defines how it behaves. There is no set definition for a correct potential function, which means you are free to choose your own. One of the simplest is a $V={1\over2}m^2\phi^2$ potential, where $\phi$ is the inflaton field. Under this model, $\epsilon = \frac{2M_p^2}{\phi^2}$ where $M_p$ is the Planck mass. We call this slow-roll inflation because the inflaton field rolls slowly down the potential, which is a simple parabola in this case. We normally choose an initial value of about $\phi=3M_p$ for complicated reasons. You can see how following the slope of the potential would then lead $\phi$ to decrease. And you can see how decreasing $\phi$ would increase $\epsilon$. By this process, inflation ends.

Now, as for the dark energy dominated era. After inflation ended, the inflatons decayed and left 3 major types of energy; radiation, matter, and dark energy. The energy densities of these three types are linked to the scale factor. Radiation has an energy density proportional to $a^{-4}$, matter is proportional to $a^{-3}$, and dark energy is more or less constant. With that knowledge and some fancy math that I have conveniently skipped over, we can define a potential function, $V(a)$, that each of these energy types contribute to and show that $$\frac{\dot a^2}{2}=-V(a)$$

We can also make the following plot: 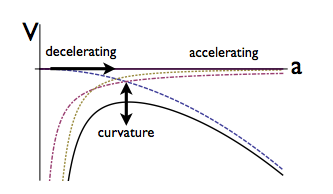 In this figure, the yellow line represents the contribution to $V(a)$ from radiation, the red is from matter, the blue is from dark energy, and the black line is the total $V(a)$. You can see that as the universe expanded, the expansion rate was initially dominated by radiation, then matter, then dark energy. The point where the blue line crosses the red line is about the time when expansion started accelerating again. We are presently just past that point.

The wikipedia article is informative

This is the current Big Bang model, summarized in an image there by Yinweichen 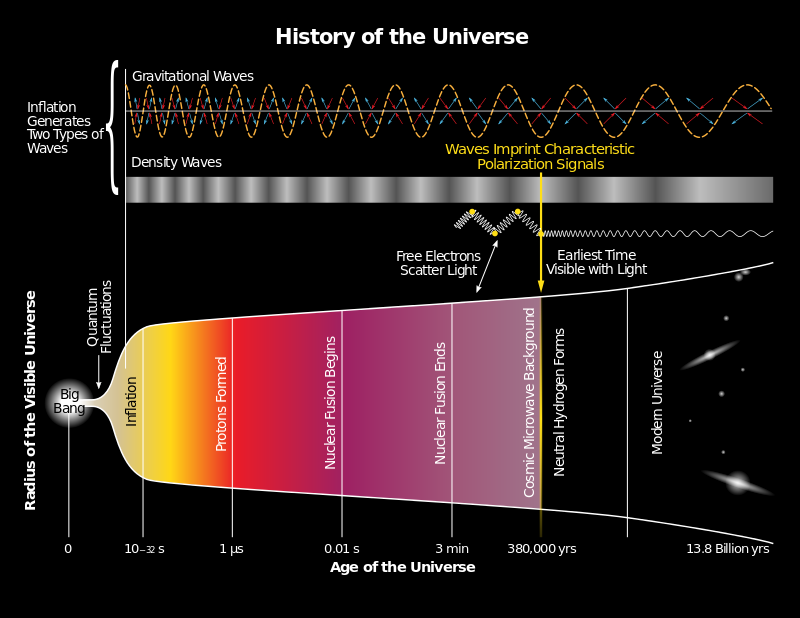 The Big Bang inflation has not stopped, in the sense of the webster definition: inflated:filled and made larger with air or gas since an accelerated expansion of the universe has been observed, at the right of the image. The expansion is not of gas, but of space itself expanding in an accelerated manner.

Expansion of the universe in time and space reduces the average energies in spacetime, different theoretical models are used to describe observations. Effective models because gravity has not yet been quantized in a validated model, and that is why new explanations may appear in the future.

The observation that the Cosmic Microwave Background is very uniform whereas at the time the photons decoupled from the masses (at 380.000 years), there was no way that thermodynamically the universe could be homogenized( since special relativity did not allow communication over the distances),showed that a new mechanism was needed. The inflation period before 10^-32 seconds was introduced, a quantum mechanical regime where the homogenization was done by the inflaton field, with rapid inflation. The inflaton field needs very large energies and as the universe expanded and densities fell the energies could not sustain inflation:

As the inflationary field slowly relaxes to the vacuum, the cosmological constant goes to zero, and space begins to expand normally.

The time before is called the inflation period.

After that period, one uses particle physics models with quark gluon plasmas etc as the time goes on. The gluons and quarks are confined because the energy falls, and nuclear fusion starts at 0.01 seconds and ends at 3 minutes when atoms start to form until most atoms are neutral and the photons decouple and give the CMB at 380.000 years from the BB singularity.

The the data/observations have shown that expansion is accelerating again, which raises the need for dark energy and a cosmological constant.

From 2003 to 2010, NASA's WMAP took very detailed pictures of the universe by means of the cosmic microwave background radiation. The images can be interpreted to indicate that the universe is 13.7 billion years old (within one percent error) and that the Lambda-CDM model and the inflationary theory are correct. No other cosmological theory can yet explain such a wide range of observed parameters, from the ratio of the elemental abundances in the early universe to the structure of the cosmic microwave background, the observed higher abundance of active galactic nuclei in the early universe and the observed masses of clusters of galaxies.

This is where we are, waiting for new data, and progress in the quantization of gravity.

7
What is the evidence for Inflation of the early universe?
4
Curvature, Omega, the Flatness problem, and the evolving shape of the universe
5
How much has the universe expanded in total from the onset of inflation until today?
4
Why did the inflation era not produce decompactification of the extra dimensions of string theory?
2
How did inflation lead to the expansion of space?
3
Equation of state at the end of inflation
0
Potential Distant Future Reversal of Universe's Dark Energy Scalars?
1
Why does inflation end when the potential becomes too steep?
1
After inflation ended, did the expansion slow down to non-inflationary expansion because of gravity?