I just recently read about the existence of internuclear forces as the reason for the nucleus to remain 'stable' as in it doesn't separate out into protons and neutrons even though there is electronic repulsion between protons and electronic attraction between an electron and a proton. But I still wasn't able to figure out why or due to what it exists.

Also, I read that the internuclear force acts on a proton-proton pair,proton-neutron pair and a neutron-neutron pair, but then what about Hydrogen, as it contains only one proton, so why does it still have a stable nucleus? And since it's nucleus is just a positive charge and there is just one negative charge at a very small distance, shouldn't the electron be attracted towards the proton(even the shielding effect is negligible) to reduce the potential energy due to the field between the proton and the electron and thus achieve the lowest possible potential energy state?

Intermolecular forces are something else entirely. The nucleus is stable due to something called residual strong nuclear force. 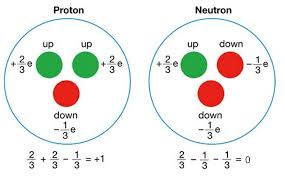 Neutrons and protons are made of smaller particles called quarks. Quarks bind to each other with a force called strong nuclear force. 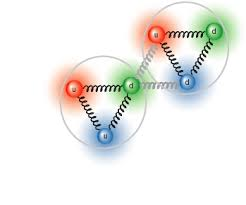 The nucleus is held together by residual strong nuclear force. This is the binding of quarks to other quarks that are not a part of the nucleon that they are in. 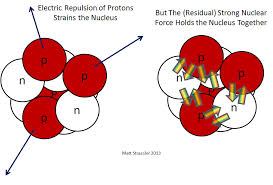 As long as the residual strong force is stronger than the the electric repulsion, the nucleus will be stable. 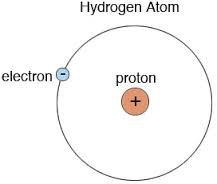 The electron is stable because of its wavefunction. Basically, there is an equation called the Schrodinger equation that we can use to tell us where a particle might be at a given time. This leads to the construction of the Schrodinger model of the atom. 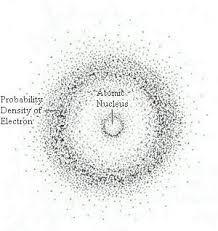 The electron doesn't fall in because its wavefunction usually doesn't have it fall in. The electron will usually be where the dots are the densest.

Not the answer you're looking for? Browse other questions tagged forces electrostatics nuclear-physics or ask your own question.

2
Why don't neutrons cluster on their own?
2
Trying to understand how nucleon number relates to spin of nucleus
0
Electromagnetic force between neutron and proton
6
Can a nucleus (made of neutrons) exist without an EM field?
1
Using an electric field to rip apart a nucleus