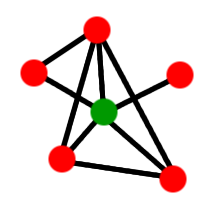 15
Which areas in physics overlap with those of social network theory for the analysis of the graphs?

15
Which areas in physics overlap with those of social network theory for the analysis of the graphs?
4
Properties of graph of subatomic particle interactions
2
Graph Invariants and Statistical Mechanics
3
Quantum graph theory: complex spectra
6
Graph Theory and Feynman Integrals
0
Writing a proper answer in a velocity-time graph
3
Betti number of Feynman graph
0
Line graph of altitude and pressure