How random is a lottery machine? What conditions would make it less random? 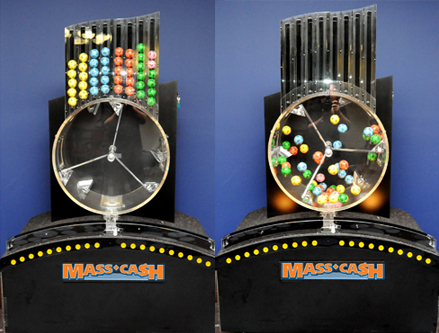 are accepted as producing genuinely random results. (Or random enough?).

However, it seems like the results are a largely a product of Newtonian mechanics, and are thus in some sense deterministic.

The question I have, what conditions would make them less random (short of actually rigging them) For example, how random would they be if they were operating in a vacuum?

This is similar to the problem of the best way to shuffle a deck of cards. I think that, generally speaking, these types of mixing techniques (similar to just spreading out a deck of cards and making a mess pushing them around) are actually quite good at eliminating correlations if they are done for enough time. You are right in that this system is primarily governed by Newtonian mechanics, such that if you knew the initial conditions of the system well enough and had a powerful enough computer, you could probably predict the result, but for practical purposes this isn't so important. There are probably numerous ways of rigging a machine like this as well.

Some things that would make it less random include using fewer balls, having a smaller disk for them to move around in, and swirling the disk for a shorter period of time. Doing the experiment in vacuum would probably make the system a little easier to calculate, but again something like this would still be so difficult to calculate (you'd also have to very precisely know e.g. the location and structure of rough spots on the disk and the balls) that it isn't very important for anyone who actually cares about winning the lottery.

Not the answer you're looking for? Browse other questions tagged newtonian-mechanics randomness or ask your own question.

18
Underdetermined forces in a statics problem
1
What would happen if you went back in time to get a random number?
3
Is there a mechanism for randomness?
1
Feynman's random walk: How does he get $⟨D^2_N⟩=N$?
0
Can energy be satisfactorily defined and explained in Newtonian terms?
2
What is a probabilistic physical theory?