Are we traveling through time at the speed of light? [duplicate]

Ask Question
Asked 5 years, 10 months ago
Active 4 years, 7 months ago
Viewed 4k times
4
$\begingroup$
This question already has answers here:
Why are objects at rest in motion through spacetime at the speed of light? (6 answers)
Closed 5 years ago.

In the image below the y axis represents time and x represent velocity. Point D represents velocity c, point E represents 1 second per stationary observers second. What this chart is showing is as you get closer to the speed of light your progression through time slows.

The longer I examine this chart the more it looks like it depicts the progression through time for a stationary object to be at c. As you move through our spacial 3 dimensions you start to loose speed in the 4th time dimension.

What this chart also shows is that the sum of our 3 spacial vectors and the time vector always equal c.

Am I correct with these assumptions, is the vector sum of time and 3 spacial dimensions c?

If so how would gravitational time dilation be represented in this chart? Would you start lower on the y axis and still be able to accelerate up to c on the x axis? 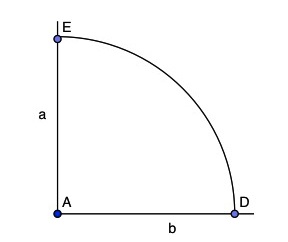 If you account for the correct signature of your norm, then yes, you are correct, that the "distance" between events in spacetime (called the proper time, if $t^2>x^2+y^2+z^2$ and the proper distance otherwise) is conserved by uniform relative motion induced changes and also that our velocity vectors, as measured by an inertial observers always have a length $c$, even when we're stationary relative to that observer. But your diagram does not quite show this.

Your plot describes a situation where the time dimension is exactly like spatial dimensions:

That is, according to the reasoning implied by your diagram, if the "displacement through spacetime" between two events is $(t, x,\,y,\,z)$, then your diagram describes the situation where the Pythagorean squared distance between the events $t^2+x^2+y^2+z^2$ will be the same for any observer.

I'm using here time units of "meters", so that in these units, one second is scaled to roughly $3\times 10^8$ meters (the distance light travels in this time).

However, the overwhelming experimental evidence is that this is NOT our reality. The statement of our reality is almost the same as the above, but there is one crucial difference: Pythagoras's theorem is replaced by a so called signatured version, so that the element $t^2-(x^2+y^2+z^2)$ is the one that is conserved.

This seemingly small matter of a sign has HUGE physical implications. For one thing, suppose relative velocity induced transformations conserved the Euclidean norm. Do you know what homogeneous linear transformations keep the relative "distance" (norm) between all points the same? It is in fact a rotation. So, if our relative velocity induced transformation were a rotation, it could rotate the unit vector $(1,0,0,0)$ just like any other spatial unit vector. In other words: it could reverse the time order of any two events by rotating the spacetime displacement between them through half a turn. Causal links in such a universe would be very strange indeed, where some uniformly moving observers could see effects come before causes.

When we put the right signs in, we find that causality is much less thorny and much more like our everyday commonsense notion: as long as $t^2-x^2-y^2-z^2>0$, then the time co-ordinate cannot lie in the interval $(-\sqrt{x^2+y^2+z^2},\,\sqrt{x^2+y^2+z^2})$. In other words, the time interval between these events cannot continuously switch sign as the events co-ordinates undergo a continuous sequence of relative velocity induced transformations. Causal relationships are thus preserved between events that are separated by a displacement where $t^2-x^2-y^2-z^2>0$.

So that is an everyday observation that backs up the signatured norm: there is a simple causal relationship between pairs of events and that is upheld as long as things don't move relative to one another faster than the speed of light.

A second experimental result is the one of time dilation (which is a little more involved to derive), but it is overwhelmingly confirmed by the lengthening of unstable particle lives in keeping with the time dilation formula when they are driven at a considerable fraction of lightspeed in a particle accelerator.

Other physics and relationships that would arise with a Euclidean spacetime norm are explored by science fiction author Greg Egan in his trilogy Orthogonal. A fantastic and correct summary of some of these weird changes are given in:

Greg Egan, "Plus, Minus: A Gentle Introduction to Orthogonal"

I don't know much about Greg Egan, but he certainly shows considerable sound physics and / or mathematics learning / training in the web pages giving physical background to his wonderful stories.

Not the answer you're looking for? Browse other questions tagged special-relativity time metric-tensor speed time-dilation or ask your own question.

2
Is it possible to speed up time using Special Relativity?