How can I quantitatively and qualitatively understand the fact that there is a relevance between the existence of anti-particles and causality?

This is a consequence of the fact that there is no positive frequency function which is zero outside the light cone. If you have a particle in relativity, its dynamics require that it goes faster than light, and to restore causality, it must go back in time. This is explained in my answer here: Is anti-matter matter going backwards in time? .

If you have a quantum particle with positive energy, the propagation function $G(x-y)$ is the amplitude to go from x to y. This propagation is said to be causal if the propagator is zero unless x is to the future of y, so that in a time-space decomposition, $G(t,r)$ is zero for t<0. In this case, the Fourier transform $G(\omega,k)$ cannot vanish for all $\omega<0$, because it is impossible for a nonzero function and its Fourier transform to both be exactly zero in a half-plane.

Because of this, there is no relativistic particle formalism in which the particles both have positive energies and causal propagation. You can either deal with fields, in which case the particle notion is non-local, or you can deal with particles, but then they go back in time.

The back-in-time formalism is using the standard non-causal Feynman propagator, which is

The Klein Gordon equation is.

A straightforward generator of time evolution would be.

With a (-) sign for particles and a (+) sign for anti-particles. However, this generator is non local since it corresponds to an infinite series of derivatives. In fact it's equal to a convolution with a Bessel K function. 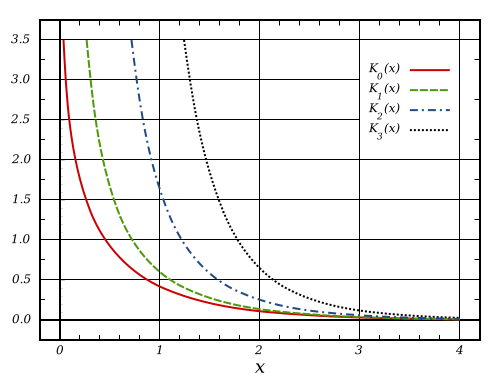 This means instantaneous propagation since $\partial\psi/\partial t$ depends on non local values of $\psi$. This problem then enters the general time evolution operator for arbitrary $t$.

However, now comes the trick:

because the Taylor series expansion of the cosine only contains even powers of the argument there is no more square root operator.

It has to be said that the part outside the light cone is small to begin with, in the order of the Compton radius of the particle. But it also shrinks further as propagation progresses. For an electron it's about $10^{-13}m$ at the start of the propagation but only $10^{-20}m$ after a lightmicron (the time in which light propagates 1 $\mu m$). It shrinks further away linear with time.

This issue does not occur for the time evolution operator of the correct equation for the electron : The Dirac equation. This equation is linear and $\partial\psi/\partial t$ does not contain the above square root.

Not the answer you're looking for? Browse other questions tagged quantum-field-theory antimatter causality or ask your own question.

114
Is anti-matter matter going backwards in time?
8
Why don't quantum effects invalidate the speed of light barrier?
3
Do particles travel backward in time in a particle interpretation of field theory?

0
Bigger anti-matter particles
17
Anti particles: What exactly is inverted?
1
How many anti-particles hit the ground?
18
Can bosons have anti-particles?
8
Commutators, Measurement, and Causality in QFT
1
Causality in quantum field theory with particles going faster than light
0
Why using time-ordering causality? and what is Difference between Locality and Causality?