In solid bodies, $\tau_{xy}=\tau_{yx}$ makes sense to me because the volume elements "hold together" and can not spin against each other and therefore the resulting torque from the shear stresses has to be zero.

However, in fluids I imagine that the volume elements are able to spin against each other, and I was really surprised when I learned in my fluid mechanics lecture that $\tau_{xy}=\tau_{yx}$ holds for fluids too.

I realize that in this case a resulting torque would lead to an acceleration of the rotational speed of the volume elements, but I can't see anything which prevents that.

I unsuccessfully googled around a lot about this issue. I also asked my professor and several assistants, but neither of them was able to provide a satisfying explanation. Therefore I'm guessing my question doesn't really make sense in this way and/or is based on a very basic lack of understanding.

All of this applies to any fluid that is described by a rotationally invariant Hamiltonian, that means any fluid made of atoms, electrons, quarks, gluons, etc.

An interesting question arises if rotational invariance is broken spontaneously, for example in the case of a liquid crystal. In that case, angular momentum is still conserved, and the stress tensor is symmetric, but the hydrodynamic description of the fluid (and the stress tensor itself) depend on an extra vector field $n_i$, which arises from the order parameter.

I have encountered the same question with exactly the same thought. But I found a way to explain. Consider a fluid element: 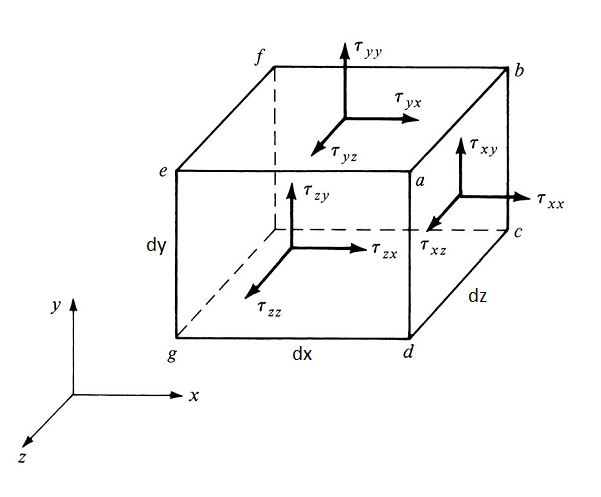 Not the answer you're looking for? Browse other questions tagged fluid-dynamics symmetry stress-energy-momentum-tensor or ask your own question.

4
What is the shear stress of a fluid?
6
Stress energy tensor of a perfect fluid and four-velocity
0
shear and normal stresses
1
Ideal, isotropic fluid and stress tensor
3
Derivation of the relativistic fluid stress tensor
1
Why are diagonal elements of stress tensor equal to pressure for fluids?