I am having trouble piecing together some information regarding the stability of a nucleus.

I have read that iron-56 is the most stable isotope, because it has the highest binding energy per nucleon in one source. Then I have read in another source that for a nucleon to be stable, the attractive forces and the repulsive forces between nucleons must (to a certain extent) be balanced.

This information seems to be conflicting because the second source implies that a nucleus will be unstable if the attractive forces are too much stronger or too much weaker than the repulsive forces (I assume this balance of forces has something to do with the stability curve).

The second source then said that the nuclei will undergo decay if the forces are unbalanced (attractive forces are too much stronger or too much weaker than the repulsive forces). however, if iron-56 has the highest binding energy per nucleon would it not be highly unstable if the forces are so strong?

How does this information fit together? What forces act upon the nucleus and how do they alter the stability of the nucleus?

(Is it possible that I am misguided in thinking that iron-56 is the most stable isotope, because it has the highest binding energy per nucleon? Could it just be because iron has the most balanced forces acting upon it and that's why it is so stable? The problem with this thinking is that, having done mass defect calculations, it is clear that iron-56 does have the highest binding energy per nucleon.)

nuclear-physics mass-energy
Share
Improve this question
edited May 31, 2015 at 11:08

Let us consider two different nuclei (1 and 2) with the same number of nucleons, but different numbers of protons, so p1+n1=p2+n2 (where p1 and p2 are the numbers of protons and n1 and n2 are the numbers of neutrons in nuclei 1 and 2, respectively), but p1>p2. So the repulsive forces are greater, on average, in nucleus 1, as there are more protons there, but attractive forces are largely the same. So, on the face of it, nucleus 2 should be more stable, however, this is not necessarily so. Let us consider an extreme case, where p2=0. Based on the above, we could conclude that such purely neutron "nucleus" would be extremely stable, however it would be unstable with respect to decay of neutrons. You know that an isolated neutron decays through beta-decay in a few minutes (remember that neutron has a higher mass than proton). Neutrons can be stable in nuclei because beta-decay (where a neutron turns into a proton, emitting lighter particles) would increase the nucleus' energy due to the resulting higher number of protons. However, neutron-rich nuclei can be unstable due to beta-decay. So there can be a correlation between the balance of attractive and repulsive forces, on the one side, and nucleus stability, on the other side, but is this correlation causal? I doubt it.

There are a whole pile of issues in your question. There is a fundamental difference between binding energy and forces, and usually, thinking about the forces between nucleons is not particularly helpful. The concept of binding energy is much more powerful.

In a collection of nucleons, the force experienced by one nucleon must be the summation of the forces acting on it due to all the other nucleons. This will be a combination of the residual strong nuclear force, which to first order is the same for protons and neutrons, and the coulomb repulsion felt only between protons. These two types of force have radically different separation dependencies. Whilst the proton-proton repulsion is an inverse square law and comparatively weak, the strong-force is much stronger at small separations, is attractive and decays exponentially with a scale length of 1.4 fermis, but becomes extremely repulsive at separations less than about 0.7 fermis.

What this means is that all nuclei tend to be about as small as they can be, with the nucleons separated by about 1 fermi. They are like little hard, close-packed spheres. Each of these spheres will be bound to its nearest neighbours by the attractive strong nuclear force, but the protons will also feel a repulsive force due to all the protons in the nucleus. For a given set of neutrons and protons, the separation between the nucleons could be adjusted to achieve a force balance. If you tried to squish the nucleus, the strong nuclear force would become repulsive and it bounces back. If you try to expanded the nucleus the coulomb repulsion would get weaker bringing the nucleons back towards an equilibrium. What you imagine is that the nucleons sit in a potential well. The equilibrium point between the forces is at the bottom of the well where the gradient in potential (i.e. the net force) is zero. The depth of the well corresponds to the binding energy and is the sum of the binding energy terms due to the strong nuclear force, the coulomb repulsion (and also other items like whether the nucleons are paired in energy states or whether there is symmetry between the numbers of protons and neutrons).

These considerations basically apply to all nuclei. There is usually some sort of equilibrium to be found between the forces, but this does not equate to stability and this where I think your book is leading you astray. Instability arises because there is a feasible way of rearranging the nucleons (i.e. changing a proton to a neutron or vice-versa) or ejecting a nucleon (or alpha particle) in order to reach a configuration that has an even deeper potential well. A general principle in physics is that systems will seek to minimise their energy density if there is a means of doing so. Similarly, if there are nucleons or particles in the vicinity of the nucleus, it may be possible to capture or interact with these in order to produce a new nucleus with an even deeper potential well.

So radioactive decay is really not best thought of in terms of a competition between forces. For instance, a nucleus will beta decay (a process governed by the weak force, a much shorter range force which is not a factor in the forces between the nucleons), because by changing a neutron to a proton the resulting nucleus has a larger binding energy (deeper potential well).

An atom will be stable if, 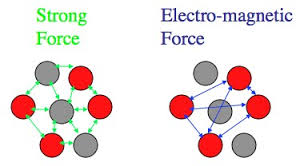 When atoms are radioactive, they will stop decaying when binding force = repulsive force. This is only because there is no point in decaying anymore. At that point the atom is already stable.

Not the answer you're looking for? Browse other questions tagged nuclear-physics mass-energy or ask your own question.

11
How to explain $E=mc^2$ mass defect in fission/fusion?
3
Nuclear Binding energy
5
A naive look at the band of stability suggests a stable isotope of every element. Why is this intuition false?
0
Highest Binding Energy per Nucleon
2
Stability of isotopes
0
Why does formation of iron in stars doesnt produce any energy?
1
Stability and Nuclear Binding Energy
1
If greater the binding energy per nucleon, more the stability, then why is Uranium (7.7MeV/nucleon) unstable?