Is there experimental evidence for the model of discrete intervals and orbital distances for electrons around the atomic nucleus?

Is there strong supporting evidence of discrete electron shells or orbitals surrounding atomic nuclei? I realize the math works out and we have energy frequencies emitted, perhaps even atomic diameter measurements. But these still seem indirect and allow for other possible explanations. Is there direct experimental evidence for these? The orbitals concept is always shown almost as fact, not theory, so wondering what experiments must support such strong conclusions and don't mention any other alternatives?

Historically, the first strong evidence for the existence of discrete orbitals was the Franck-Hertz experiment. They threw energetic electrons to a gas tube (in their original experiment, they used mercury), and they found very sudden drops in the transmitted electron flux at concrete energies. Those events occurred when electrons inelastically collided with mercury atoms, and the mercury atoms only could absorb the energy in the collision at certain discrete energies. They also found that light with the right frequency was emitted after the collisions.

Since then, a really huge amount of experiments have been made that are even capable to manipulate atomic energy levels (for example, qubits based on the Jaynes-Cummings hamiltonian)

EDIT: To address the part of the discrete distances, I think that it's enough to invoke Coulomb's law. But I'll include a example of its consequences: the paramagnetism of rare-earth ions. 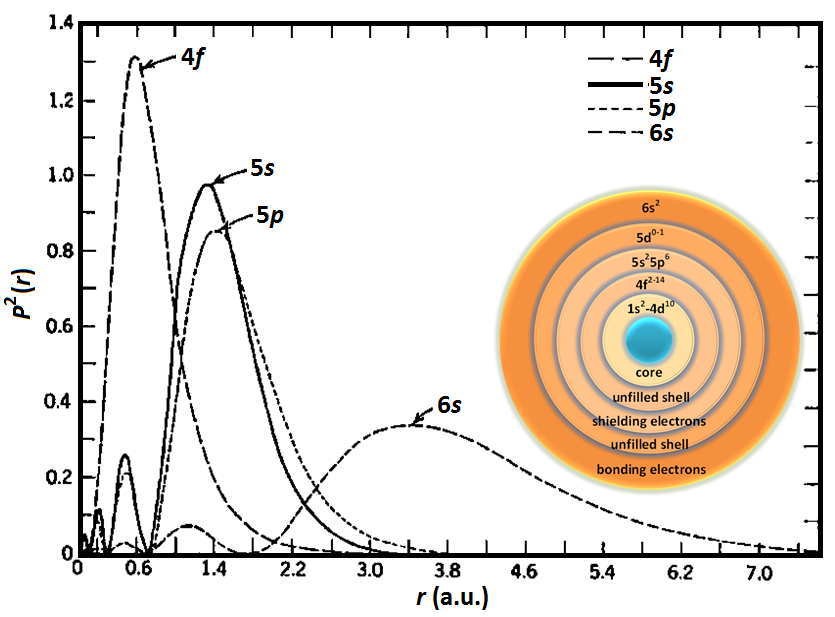 Those outer orbitals 'shield' the 4f electrons from the crystalline electric field, so they behave as if they were free electrons: their magnetic moments come from both orbital and spin angular momentum, and these elements have larger paramagnetic responses. That wouldn't happen if the 4f and 5s 5d electrons weren't located at different distances from the nucleus.

Not the answer you're looking for? Browse other questions tagged electrons atomic-physics atoms or ask your own question.

3
Is there a list of all atomic electron state transitions and the corresponding radiation emitted?
1
Do electrons pop into and out of existence around the nucleus of an atom?
4
Why do electrons have to fall on the nucleus in the Rutherford atomic model?
1
Is there a way to strip all the electrons from single atom with atomic number greater than 2
0
Behaviour of electrons outside the atomic model
2
Experimental result of the atomic nucleus volume by scattering alpha particles from the atomic nucleus. Investigation of the electron volume by what?