Coupling fission and fusion and disappear all mass. Why doesn't this happen?

If you tell me this process is possible then how is it possible to recover a certain isotope of Uranium. I see this as a problem because having less mass in the "products" than in the "reactants" shows that nuclear processes aren't reversible, unless I inject mass in some way.

My second question is: Does the mass difference manifest itself as, e.g., "nucleons weigh less now", or as in "$x$ number of nucleons have disappeared". 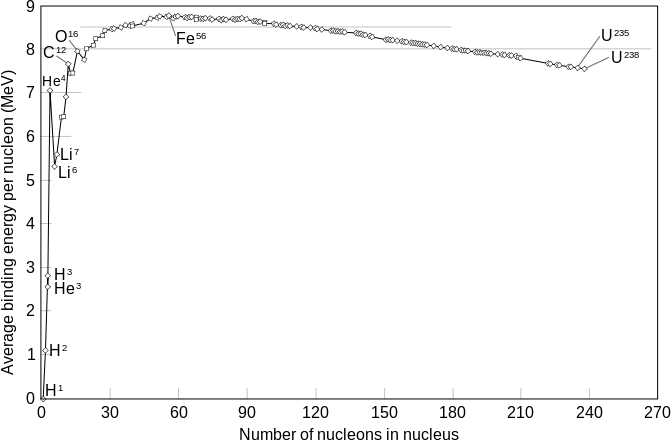 In this plot, you can see the binding energy per nucleon. For isotopes lighter than iron, nuclei can become more stable if they fuse (they move to the right in the plot), and they liberate energy (lower their mass) in the process. In the other hand, fission occurs in heavier nuclei (they go to the left), and also liberates energy. But in both cases the maximum energy liberated is given by the above plot: you can only get in total, no matter what intermediate steps you make, is the 9 MeV/nucleon difference between ${}^{56}$Fe and ${}^1$H, wich corresponds to fuse 26 protons and 30 neutrons together to form an iron nucleus. And obviouslly, iron nucleii do have mass!

No , you cannot. In addition to special relativity where invariant masses of complex objects are the "length" of their energy momentum summed four vector, which allows for the gain in energy, the atomic/nuclear level is quantum mechanical, not classical.

In quantum mechanics we have in addition to energy momentum and angular momentum conservation, conservation of quantum numbers, and in this particular proposal, it is conservation of baryon number that will not allow the scenario.

In the best/worst case, an atomic number A nucleus may have A nucleons ( neutrons/protons) free.

In addition, in fission some of the fragments are stable , again due to quantum mechanical rules: how the energy levels are arranged in the effective nuclear potential.

In fusion , again baryon numbers are conserved and again not all states are allowed to be bound due to the nuclear potential.

My second question is: Does the mass difference manifest itself as, e.g., "nucleons weigh less now", or as in "x number of nucleons have disappeared".

The excess energy appears as kinetic energy of the fragments and also might appear as a gamma ray ( photon) if spin quantum numbers allow it. Again, no disappearing nucleons, baryon number is conserved.

Not the answer you're looking for? Browse other questions tagged nuclear-physics energy-conservation mass-energy fusion binding-energy or ask your own question.

11
How to explain $E=mc^2$ mass defect in fission/fusion?
2
Does energy conservation not hold in fission and fusion processes?
2
Binding energy converted to kinetic energy/mass loss
0
Energy released in nuclear fission
0
How exactly does nuclear reactor work in generating energy, when the energy created from fission transformed into binding energy?
0
Fusion Kinetic Energy
2
Binding energy, fission and fusion
2
How can nuclear fusion release energy (even in principle)?