Explain why quantum behavior is not observed in daily life

How come we don't see any "Wave" attached to a classical object such as a car?

You always see the object in the same place without any uncertainty.

I am sure there are answers, but please use the simplest language understandable by general public.

quantum-mechanics everyday-life physical-constants
Share
Improve this question
edited May 29 '15 at 20:09

1) The photoelectric effect, that light hitting metal extracts electrons with discrete energy characteristic if the metal, the effect can be explained only as a particle hitting the electron; classical electrodynamics says light is a wave with alternating electric and magnetic fields of continuous energy.

2)the periodic table of elements which showed a limit to the fragmentation of matter into multiples of the weight of hydrogen. Classically fragmentation could be continuous and no structure could be predicted

3)black body radiation, which could not be explained with classical thermodynamics and electromagnetism. The model that fitted the data had to posit that there were particles, called photons, in the electromagnetic radiation of energy E=h*nu .

(ħ is the reduced Planck constant).

Macroscopic objects in general fulfill this automatically because ħ is such a small number, $6.62606957(29)×10^{-34}$ joule*seconds, that our accuracies of measuring the position and momentum of the car of the example are much larger than the variation in position and momentum of the car due to the underlying quantum mechanical variations. Our four senses are worse than our measuring instruments, of course.

So classical physics is adequate to describe experiments and situations where h is effectively zero.

The quantum mechanical effects surviving macroscopically are second level effects, like transistors, or the regularity of crystals, or the above numbered three discrepancies with classical physics. As other answers state one can prove mathematically that quantum mechanical solutions at the limit end up in classical solutions, though it needs quite some mathematical background to understand it is so.

This because though quantum physics applies everywhere, classical mechanics is a good approximation. Just like in special relativity, where as v -> 0 (or we as assume c -> $\infty$), Newton's equations become more valid, the same thing happens in quantum mechanics.

In quantum mechanics, this called the Correspondence Principle. It formally says that as n (quantum number) -> $\infty$, Newton's classical mechanics becomes more correct, but a simpler (though somewhat less correct) way of putting it is that as we "zoom out" (i.e. go to larger scales) classical mechanics provides an accurate approximation.

That being said, we can observe quantum phenomena: lasers, the photoelectric effect, heat radiation, etc.

I will start with the short version of the answer and then move to a little longer version of it.

We do not observe quantum behavior in real life because of the limitations of our biological architecture.

We didn't need to have evolutionary traits that are attuned to quantum phenomena. It is the reason why quantum physics seems so queer. An untrained person doesn't have a vocabulary to express the phenomena of an object being in two opposite states at the same time.

For example, a quantum coin could be in a state of both head and tail. How is that possible? How can it be? Well, our tongues can't articulate it. In fact, this whole thing about light being both wave and particle is a hype. This is used like a catchphrase, but all it shows that we don't have a large enough vocabulary to describe the nature of light and other quantum objects. And that's okay! In real life, we catch a ball and not an electron. That's why, in real life, quantum phenomena is not observed.

Just because it's not observed, doesn't mean it doesn't occur

@Jon Custer, mentioned about laser in the comments, and I'll mention that here too. Every time you are in a presentation, and the presenter uses the laser pointer, quantum phenomena is occurring. Sun shines, and the explanation of the mechanism needs quantum physics. We have food because of photosynthesis, and that's a quantum phenomenon too. You observe quantum phenomena all the time, if you define observing by both sensing the event and acknowledging the mechanism behind it.

The last thing I'll comment on in this answer, is the "associated wave with a particle" thing that you mentioned in the question. There's this fundamental constant in quantum physics, called the Planck's constant, $\hbar$. I could write down its value and then tell you how disastrously small it is. I won't do that because, $\hbar$ is a constant with physical units. You can say 2 is a small number. But, you cannot say 2 m is small, because it's a large distance for an ant, and small distance for an athlete.

As far as the $\hbar$ is concerned, we're giants compared to it. By 'we', I mean our coarse senses. Again, $\hbar$ isn't small, our senses are accustomed to too large of things!

Actually, Heisenberg's uncertainty principle certainly appears in everyday life, and in some cases, drives what we see classically.

So, the standard thing to do is to consider a pencil with mass $m$ and length $l$, something like an inverted pendulum. Using the small-angle approximation, you get the second-order pendulum equation ODE, which has solutions:

Now, we can obtain canonical variables (as are used in Heisenberg's uncertainty principle) by computing:

The first term is much larger! So, Quantum Mechanics is driving this very classical apparatus. This is very suprising and yet strange, that Heisenberg's uncertainty principle can also be applied to classical mechanics.

… when an object is in superposition, all its parts vibrate in synchrony. However, time dilation will cause parts of that object that are at slightly higher altitudes to jitter at different frequencies than parts at slightly lower altitudes … The greater the difference in altitude between parts, the greater the mismatch. For a big enough object, the mismatch grows big enough to disrupt superpositions.

When superpositions are disrupted, the wave functions collapse. That’s why we know with absolute certainty the position and velocity of classical objects.

And, if we want to observe quantum effects more clearly, we should conduct more experiments in space and at very cold temperatures.

UPDATE: I found the original article: Universal decoherence due to gravitational time dilation 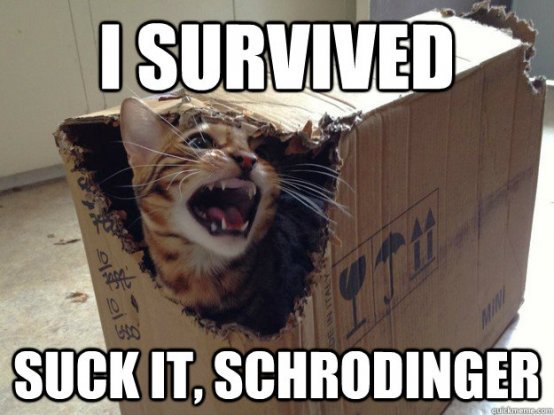 Not the answer you're looking for? Browse other questions tagged quantum-mechanics everyday-life physical-constants or ask your own question.

5
Can actual quantum effects occur on a macro scale?
10
Does the wave function always asymptotically approach zero?
5
Double slit experiment where the "particle" is a macroscopic capsule with people inside
3
Quantum mechanics and Classical limit(s)
6
Do the position-momentum uncertainty and time-energy uncertainty really exist in QFT?
2
Interpretation of Uncertainty After Non-ideal Measurements in QM
4
Why can’t particles be detected in more than one location?