From a simple point of view in GR/QM we take a virtual pair creation and presumable they reunite shortly in flat space-time probably representable by a space-time warpage that generates geodesic closure (?); ie. quantum mechanics. It is represented that the geodesics around a black hope are such that even the small separation leads to different space-time paths.

My problem with this model is that any space-time curvature should also allow this to happen; even around us on earth. Albeit with low likelihood or intensity. If this were true then all of space-time would be "relaxing" to a flat metric. Perhaps electrons and such are too big but neutrinos have a far smaller threshold due to smaller mass.

Is this reasoning reasonable?

curvature hawking-radiation
Share
Improve this question
asked May 29, 2015 at 19:00

Lets take it one step at a time.

Now a black hole is a construct specific to general relativity, and classically it should not radiate at all, because everything within the event horizon cannot leave the black hole classically.

In 1975 Hawking published a shocking result: if one takes quantum theory into account, it seems that black holes are not quite black! Instead, they should glow slightly with "Hawking radiation", consisting of photons, neutrinos, and to a lesser extent all sorts of massive particles. This has never been observed, since the only black holes we have evidence for are those with lots of hot gas falling into them, whose radiation would completely swamp this tiny effect. Indeed, if the mass of a black hole is M solar masses, Hawking predicted it should glow like a blackbody of temperature

This is a very small number and the energy of the individual photons is so low that no particle of the standard model could materialize out of this energy unless it is a micro-black hole .

The argument for the radiation comes from an effective field theory, as gravity has not been consistently quantized , so it is a heuristic argument to talk about virtual pairs, one falling into the black hole and the other leaving, the energy supplied by the gravitational field of the black hole.

Here is a heuristic image of the feynman diagrams , heuristic because it misses the gravitational vertex that will supply the energy for the reality of the escaping particle. 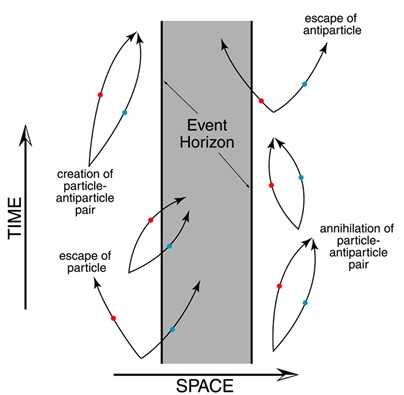 An analogous image could be devised for escaping photons, from a two photon diagram .

My problem with this model is that any space-time curvature should also allow this to happen; even around us on earth.

To speak of Hawking radiation we have to go quantum. Feynman diagrams need vertices with precise rules of calculating the probabilities. In the sense you are asking it, any loss of the invariant mass of an object in space changes the curvature. Since there is no event horizon for small objects the radiation that will involve exchanges of gravitons will join the black body radiation from the electromagnetic interactions and it will not be separable. Due to the very small value of the gravitational couplings with respect to electromagnetic ones the effect will not be measurable, in my opinion. At least not at the level of knowledge and detectors we have now.

One could think of measuring the black body spectrum of the moon , for example , and Jupiter, and compare the discrepancy from a purely electromagnetic black body , but there will be so many assumptions entering in the model and the difference so small that, imo, no definitive answer can be given.

Is this reasoning reasonable?

It is represented that the geodesics around a black hole are such that even the small separation leads to different space-time paths.

It is, but take a look at the given explanation on Wikipedia. "A slightly more precise, but still much simplified, view of the process is that vacuum fluctuations cause a particle-antiparticle pair to appear close to the event horizon of a black hole. One of the pair falls into the black hole while the other escapes. In order to preserve total energy, the particle that fell into the black hole must have had a negative energy (with respect to an observer far away from the black hole)". Virtual particles are not vacuum fluctuations. The electron and proton are not attracted to one another via some Casimir effect. And vacuum fluctuations are not pair production. Besides, electrons or positrons aren't going to escape the black hole. And if we're talking about photons, how does the other photon manage to have negative energy? Have you seen any negative-energy photons? I haven't. As for the curvature resulting in different spacetime paths, surely most of the time both end up in the black hole. So the black hole would be feeding on vacuum energy. It would grow, not evaporate. And what happened to the infinite gravitational time dilation at the event horizon? Along with why the light doesn't get out and why it's a black hole in the first place? IMHO the whole thing is fraught with problems.

My problem with this model is that any space-time curvature should also allow this to happen; even around us on earth.

It clearly isn't. Look at the space a foot in front of your face. It isn't some seething magical maelstrom of particles popping into existence spontaneously like worms from mud.

If this were true then all of space-time would be "relaxing" to a flat metric.

I think there is a sense in which space is relaxing, see the balloon analogy for the expanding universe. But it was always flat on the large scale anyway, and galaxies are gravitationally bound. Turn the bowling-ball analogy upside down and drop the level of the "plain". The "mountains" get bigger. The relaxation results in more spacetime curvature, not less.

Perhaps electrons and such are too big but neutrinos have a far smaller threshold due to smaller mass.

I'm sorry, I don't know what you mean by this.

Not the answer you're looking for? Browse other questions tagged curvature hawking-radiation or ask your own question.

65
From where (in space-time) does Hawking radiation originate?
6
If virtual particles do not exist, how do they come to life at the event horizon?
0
Why doesn't the light get out?
0
If virtual photon is it's own antiparticle why is it short lived?
0
Does Hawking radiation violate baryon number conservation?
1
Cosmological Constant on the LHS of Einstein's Field Equation