Why can velocity and acceleration be negative?

Remember that velocity and acceleration are vectors, they have a magnitude and direction. Speed, on the other hand, is a scalar quantity which only has magnitude.

So yes, the negative sign indicates a slowing down. A negative velocity would mean that the object is now moving in the opposite direction it was initially (or what you call "positive" direction, we could have made left the positive direction in the previous example). 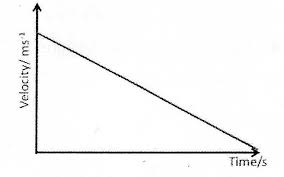 Not the answer you're looking for? Browse other questions tagged homework-and-exercises kinematics acceleration velocity speed or ask your own question.

0
Does acceleration at an angle to velocity change the direction?
0
(+)/(-) Acceleration & (+)(-) Velocity
1
Question regarding average velocity
18
The instant an accelerating object has zero speed, is it speeding up, slowing down, or neither?
1
Can we calculate centripetal acceleration by using this method $\frac{\mathbf v_2-\mathbf v_1}{T}$?