Here is a problem I am having some trouble with:

The solution is below, my question is, why is conservation of energy valid in this situation. 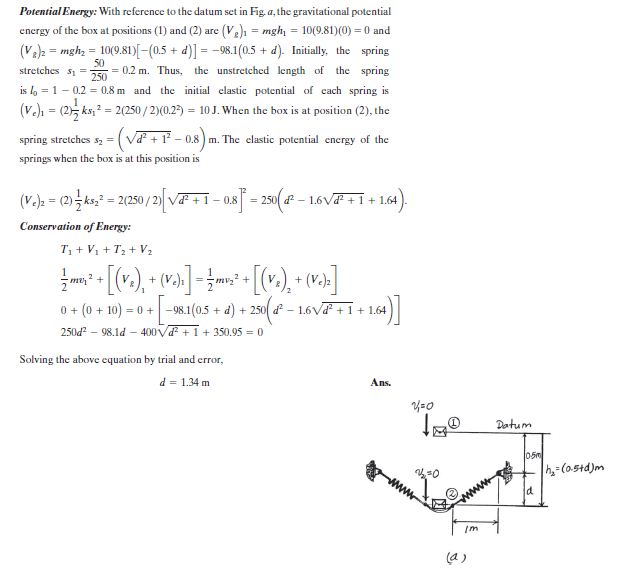 Short Answer: The contact force (normal force if you like) between the pan and the box is 0 because the pan has negligible mass.

Long Answer: The key point in this problem is that the pan has neglible mass. Suppose for a second that the pan had some mass $m_p$. After falling a distance of $0.5 \, m$ the box would have velocity $v_b = \sqrt{2gh}$. In the instant of the collision, momentum would be conserved. Therefore, the velocity of the block and pan $v_{bp}$ would have to follow.

As you can see, if the pan has neglible mass ($m_p \approx 0$), the velocity of the block-pan unit is the same as before the collision. Therefore, the total energy has not been reduced and the normal force is 0.

If the pan had had mass, then yes. The normal force would have been nonzero and would have made mechanical energy not be conserved.

In the case of zero mass, the total force is always zero (although the acceleration may be nonzero, which might be slightly counterintuitive).

Since the sum of the forces on the pan is zero, the contact force must be equal in modulus to the (sum of) forces of the springs on the pan. Therefore, the total work done on the pan by the box must be exactly the work the pan exerts on both springs.

In this way, the kinectic energy lost from the box is converted to potential energy in the spring, and no net energy goes to the pan. This makes sense, as a massless objects can't carry any energy or momentum*.

Notice that the system is NOT in a equilibrium, even though the forces on the pan are equilibrated. This is because, for a massless object, the acceleration is not a function of force. In fact, as long as the total force is zero (necessary for solutions to exist), any number may satisfy the equation for newtons second law.

*According to the laws of classical mechanics, since both are proportional to mass

Not the answer you're looking for? Browse other questions tagged homework-and-exercises newtonian-mechanics energy-conservation spring or ask your own question.

3
Having trouble understanding the work-energy principle intuitively
0
Two masses attached to a fixed vertical spring
0
Conservation of energy in vertical circular motion
1
Why is that that non-conservative work is a negative value?
0
Validation of Work-Energy Theorem
1
Normal force - 3 things I don't understand
0
Why is this system isolated?
1
How does Newton's third law work in springs?
0
Conceptual doubt regarding energy loss of a system