Good book on the history of Quantum Mechanics?

Can anyone recommend a good book on the history of Quantum Mechanics, preferably one that is technical and not afraid to explain the maths (I did a degree in Physics many years ago) and also that explains the developments using the technical language of the time rather than using treatments as we know understand them. If it also explained the input from experiments that would be great too.

There is an issue with the historical texts, that matrix mechanics is always glossed over, and if it is explained at all, it is explained completely incorrectly. The main idea of matrix mechanics is that the off-diagonal matrix elements are the Fourier coefficients of the classical quantities in the Bohr orbits. This idea is not stated anywhere with the exception of Heisenberg's paper, the Born Heisenberg Jordan "Dreimannarbeit", a certain quantum mechanics text I read twenty years ago (I can't remember the author, I suspect it was Born, but this didn't google for me), and Wikipedia. The Wikipedia article on Matrix Mechanics was written to fill this demoralizing hole in the literature.

To my mind, the development of matrix mechanics is the central event in the history of quantum mechanics. Everything before is groping towards it, and everything after is only clarification and better calculations. Matrix mechanics seems to have been only fully understood by the original authors, and a handful of others, like Pauli, Dirac, Bethe.

Einstein and Schrodinger got to quantum mechanics by a completely different route, which allowed them to internalize the matrix methods. They always thought of matrix elements in the only way they are presented in modern textbooks, as overlaps of wavefunctions with differential operators acting, not as best-possible quantum analogs of the Fourier coefficients of the periodic Bohr orbits.

Having said that, here are some historical texts. I think that the best histories are not written as histories at all, but as monographs. My personal favorite for earliest quantum theory is

This monograph explains the ideas of pre-Heisenberg quantum mechanics, as developed by Wien, Planck, Einstein, Bohr, Sommerfeld, Pauli and others. It doesn't include Kramers and Heisenberg work.

The early chapters of this wonderful mostly unrelated mathematics text contains a presentation of the logical development of matrix mechanics which is 100% accurate in terms of the technical content, and very close to Heisenberg's original reasoning. But it is not a history book.

Once you get matrix mechanics, the original papers are pretty much enough to reconstruct what everyone was thinking, these are here:

For the development of wave mechanics, there are many good sources, basically every quantum mechanics books. Wave mechanics was pretty much understood by everybody, because it was in the style of the older generation. Dirac's book gives a reasonable account of the formalism of quantum mechanics as best understood until Feynman and Schwinger revolutionized everything. For this era, there is

which is best read with Schwinger's excellent collection of reprints

For me, the important parts are usually left out of all of these. The path integral is only properly explained in the 1970s, by authors other than Feynman, although both Dyson and Mandelstam explained it well in the 1950s. Feynman's presentations are pretty good, but they do not give the cleanest explanations of the relation to Wiener integrals or imaginary time. Feynman certainly understood this stuff, it is just not best presented in his book or his articles (although they are required reading, of course).

I forgot to add the last important formal development in quantum mechanics, the Grassmann integral. To call this paper scandalously neglected is the understatement of the century. Mandelstam is basically the only person who cites this paper!

This is the original source of all the Grassmann methods used by everyone today. The author appears nowhere else in the theory literature (he might appear again as an experimentalist twenty years later, or maybe its someone else with the same name), but this paper is a great classic. Similar converging work is due to Salam and collaborators, to Berezin in the Soviet Union, to Feynman and others, but nobody had the right idea except Candlin, and everyone copies him without attribution, until by the late 1960s, everyone is falsely attributing the results to Berezin's 1960's quantum mechanics textbook. To be fair, Berezin went somewhat further, but Candlin's article is clearer and it is ten years earlier.

Author was a particle physicist. The book is mostly a history of particle physics, but quantum mechanics is heavily intertwined. Otherwise it meets your criteria perfectly.

Although it dates from 1966, and only just comes up to your requirement for mathematics, Max Jammer's "the conceptual development of quantum mechanics" is still a good read. I went through Web of Science to look at whatever reviews there might that cited the Jammer, and found http://dx.doi.org/10.1119/1.15057, "RESOURCE LETTER HP-1 - HISTORY OF PHYSICS" (AMERICAN JOURNAL OF PHYSICS, Volume: 55, Issue: 8, Pages: 683-691, Published: AUG 1987).

Hopefully it's fair use to include the relevant page here as a PNG, 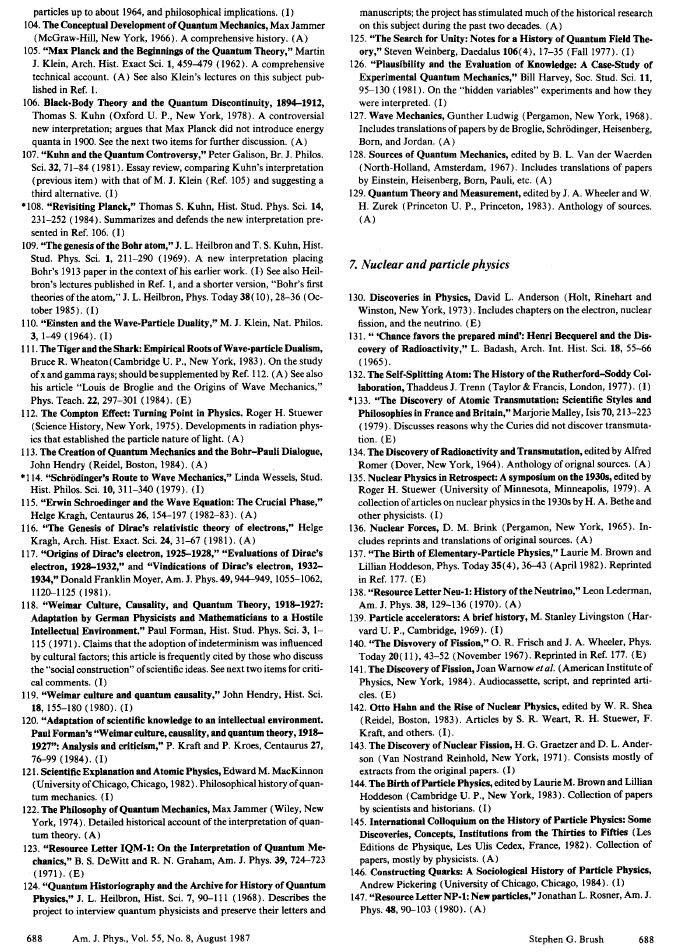 Werner Heisenbergs autobiography would be a good choice. It's not written in formulas but Heisenberg really shows how his view on the subject evolved decade by decade and talks about the major impacts on him and the theory of quantum mechanics.

If you want theory, then I suggest Von Neumanns influential classic Mathematical Foundations of Quantum Mechanics. The "Book Description" on Amazon says it all.

A mixture of both is the first chapter of Weinbergs The Quantum Theory of Fields, which foremostly tells the story of the rise of QFT.

I second Jammer's book. It is conceptually well laid out. Contrasted to this, Pais' book ("Inward Bound") tries to chronologically catalogue the events. So, it depends on what exactly you are looking for.

Apart from these two, there are other books which are narrow and focused about quantum physics topics. E.g., there is

There's a six volume history of quantum mechanics by Jagadish Mehra and Helmut Rechenberg. It's called "The Historical Development of Quantum Mechanics". I think this 6 volume work is a must have. It details the scientists, life in the universities, and most importantly the development of the physical ideas. One volume is dedicated to the work of Heisenberg, another to Dirac's, one to Schrodinger's and lot more other interesting stuffs. All may not agree, but I think this is an authoritative volume on the historical development of quantum mechanics. However, it doesn't have the development of quantum field theories nor quantum electrodynamics.

The 553 page Quantum theory at the crossroads: Reconsidering the 1927 Solvay Conference by Guido Bacciagaluppi and Antony Valentini (2009) is available for free online.

Tomonaga's Old Quantum Theory is in textbook form, which could be of use if read alongside a serious historical exposition, such as Jammer's, in my humble opinion.

Not the answer you're looking for? Browse other questions tagged quantum-mechanics resource-recommendations history or ask your own question.

1
History of Newtons law of gravitation
2
Searching for a textbook on Imaging
0
Where can I learn about band theory?
1
Finding a physics-made-simple book... A longshot
7
Are there modern 1st year university physics textbooks using old-schoool layout, i.e. no sidebars and smaller format?
3
Math-free resources for drawing Feynman diagrams