How do tracking detectors in particle accelerators create the pretty pictures we see?

I have read several sources about tracking detectors used in particle accelerators like LHC, but still have not found a more detailed source that can still be understood by a layperson like myself. I am looking at CERN's article, "How a detector works". I am hoping to learn more details about this part:

Tracking devices reveal the paths of electrically charged particles as they pass through and interact with suitable substances. Most tracking devices do not make particle tracks directly visible, but record tiny electrical signals that particles trigger as they move through the device. A computer program then reconstructs the recorded patterns of tracks.

My core question is this: With the uncertainty principle and the observer effects in mind, how do these tracking/tracing devices measure both the position and momentum of particles with the kind of accuracy that they seem to get with the beautiful color pictures you see of particle traces coming out of a collision?

Do they use some kind of charged gas that emits light when a charged particle, such as an electron, passes through them? Can electrons be tracked, or just certain heavier particles?

First of all, the uncertainty principle and observer effects are completely irrelevant. The tracking devices in modern detectors are large enough to be firmly in the realm of classical physics. Any uncertainty in the detector's wavefunction is negligible compared to the size and energy of the device itself, and the effect of detected particles on the tracker is not more than the loss of a few electrons here and there. Granted, over trillions of collisions, this could become a problem, but trackers are built to resist this kind of damage. They have electrical connections to replenish lost electrons, and they are made of dense materials that will retain their structure even if the occasional atomic nucleus gets transmuted into another one due to radiation.

As for how these tracking devices actually work: there are several different types. Each of them records a particular type of information, and is sensitive to only certain particles. The trackers are arranged around the beamline (the path through the center of the detector, where the incoming particles go) in a way that allows scientists to identify the signature of a particular particle by cross-checking the outputs of different types of trackers. It looks basically like this picture, from Wikipedia: 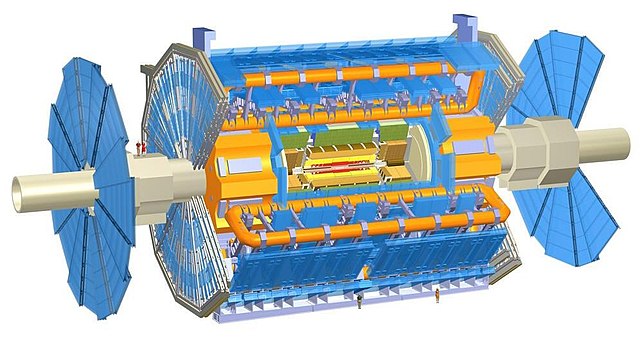 A typical detector includes the following types of components, working from the inside out:

At this point, everything except neutrinos has been detected, and there's nothing you can do about the neutrinos, so we just let them go.

As I mentioned before, the electrical signals from the components get fed into readout circuits, which convert them into digital signals that are then passed on to the computer. A detector sees thousands of collisions per second and collects an enormous amount of data on each one, so it can't all be stored. Instead, the signals get sent through several levels of triggering systems. The first level simply combines the readings from different parts of the detector and throws out any detections which are "boring" - for example, none of the trackers got any readings, or the readings don't exceed a certain threshold, or whatever the detector team decides is not important. (They go through a long process of analysis to decide what is not important.) After that, anything which hasn't been eliminated is sent to the CERN computer cluster for a more sophisticated analysis. What comes out at the end are sets of numbers giving the signal strength measured by each of the detector components, but only when all those signal strengths together constitute an interesting event.

If you have access to these signal strengths, you can feed them into a computer program which will produce an image of the detector and plot the corresponding signals on top of it. That's where the particle traces you've seen come from: the detector press team (or others who have access to these raw measurements) will pull out the best-looking ones and release computer-generated "pictures" that show the measurements.

OK, I have found additional material on the CERN site which further describes the tracker detector and the silicon pixels and silcon strips within the detectors. Fascinating stuff.

The first article says that each measurement of the detector is accurate to 10 micrometers. Seems like great accuracy, esp. for their purposes. However, I calculate about 100,000 atoms or about 10,000,000 gamma ray wavelengths would fit inside that kind of spacial variation -- so it seems the uncertainty principle is fairly intact with these types of measurements... ie, not a very accurate measurement of both the position and momentum of an individual low-mass particle, like an electron, I suppose unless it was a higher mass particle (like a Higgs Boson)?

Not the answer you're looking for? Browse other questions tagged heisenberg-uncertainty-principle large-hadron-collider particle-detectors or ask your own question.

15
How can we 'see'/measure/detect particles during experiments?
3
Physical experiments - False positives