If the speed of light is constant in all reference frames, why does the mirror clock experiment show light travelling on an angle?

I was recently looking for answers as to why time slows down the faster you travel and regularly came across the mirror clock experiment. This experiment has a beam of light bouncing between two mirrors as the mirrors travel relative to a stationary observer. The experiment says that from the point of view of the stationary observer the light has to travel a longer distance, down on an angle (due to the sources movement) then after hitting the mirror, backup on an angle to hit the top mirror - ad infinitum. However I thought that the speed of light is the same in all reference frames and not affected by the source. So if correct (I assume I'm wrong here) wouldn't the light still go straight down relative to the stationary observer, and essentially the moving clock would move away from the light?

No - the light is moving with the mirrors. To an observer in the mirror / clock frame, because they're in the same frame the light will appear to only move from one mirror to the other (up/down).

However an observer not traveling with the clock, would still observe that inside the clock system (mirrors and the trapped light) the light still moves only from one mirror to the other.

In the clock frame, the distance you observe the light to travel is the distance between the mirrors. But to an outside observer, it is more than that, because between each bounce the entire clock system (mirrors and light) has moved forward for that observer.

The part you seem to be confused by is that if the clock were to start moving, then yes, the light wouldn't accelerate with it necessarily. The experiment tends to neglect this detail and assumes that the clock has always been moving. 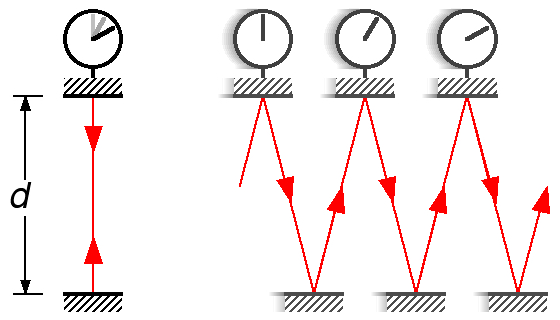 Not the answer you're looking for? Browse other questions tagged speed-of-light or ask your own question.

15
How is the speed of light constant in all directions for all observers?
3
Dimensional Paradox Demonstrated by Light Moving Between Parallel Mirrors
16
How can I show that the speed of light in vacuum is the same in all reference frames?
1
Einstein light clock with mirrors but what if mirrors outside the train?
2
Number of reflecting surfaces in the rotating mirror in the Michelson method of determination of speed of light
1
How can the speed of light in matter be measured?