Does quantum mechanics imply that particles have no trajectories?

In that case, solving the equations of the theory instead of giving the trajectory of the particle gives just statistical information about it. Up to there it is fine, these are just mathematical models. The model from Classical Mechanics has been confirmed with experiments in some situations and the Quantum Mechanics model has been confirmed with experiments in situations Classical Mechanics failed.

What is really troubling me is: does the fact that the Quantum Mechanics model has been so amply confirmed implies a particle has no trajectory? I know some people argue that a particle is really nowhere and that observation is what makes it take a stand. But, to be sincere, I don't swallow that idea. It always seemed to me that it just reflects the fact that we don't really know what is going on.

So, Quantum Mechanics implies that a particle has no trajectory whatsoever or particles do have well defined trajectories but the theory is unable to give any more information about then than just probabilities?

quantum-mechanics quantum-interpretations
Share
Improve this question
edited May 27 '15 at 5:44

Quantum systems do not have a position. This is intuitively hard to grasp, but it is fundamental to a proper understanding of quantum mechanics. QM has a position operator that you can apply to the wavefunction to return a number, but the number you get back is randomly distributed with a probability density given by $|\Psi |^2$.

I can't emphasise this enough. What we instinctively think of as a position is an emergent property of quantum systems in the classical limit. Quantum systems do not have a position, so asking for (for example) the position of an electron in an atom is a nonsensical question. Given that there is no position, obviously asking for the evolution of that position with time, i.e. the trajectory, is also nonsensical.

I don't swallow that idea. It always seemed to me that it just reflects the fact that we don't really know what is going on.

and you are far from alone in this as indeed his Albertness himself would have agreed with you. The idea that we don't know what is going on is generically referred to as a hidden variable theory, however we now have experimental evidence that local hidden variable theories cannot exist.

So, Quantum Mechanics implies that a particle has no trajectory whatsoever

It depends what "whatsoever" means and what "particle" means and what "trajectory" means. All these words in physics depend on the framework. For distances larger than nanometers and energies larger than some kilo electron volts or so, the classical framework is what defines these words. A particle has a fixed center of mass that given a momentum describes a trajectory according to the classical mechanics theories.

or particles do have well defined trajectories but the theory is unable to give any more information about them than just probabilities?

For distances larger than nanometers and energies larger than a few keV particles have well defined trajectories.( The sizes depend on the Heisenberg Uncertainty Principle and the very small value of h_bar).

Here is an electron trajectory, the electron is a particle

and the width of its trajectory is smaller than a micron. There is no ambiguity to its particleness , and the trajectory can be computed classically, given the magnetic field which is perpendicular to the plane of the photo.

So "whatsoever" is defined as "trajectories exist in the macroscopic dimensions, quantum mechanical probabilities reign at the micro system." The classical trajectory emerges smoothly from the underlying quantum mechanical level.

P.S. There do exist macroscopic manifestations of quantum mechanics , like superconductivity , but that is another story. 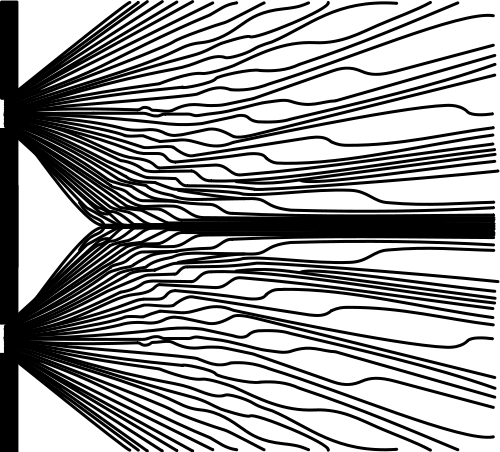 The literature on quantum trajectories is very broad, because not only them are used for raising foundational questions about quantum mechanics, but to solve practical problems such as getting rates of chemical reactions, modeling of classical-quantum couplings, and so on. A good introductory book that cites relevant articles is the book by the one of the pioneers on computational quantum trajectory methods 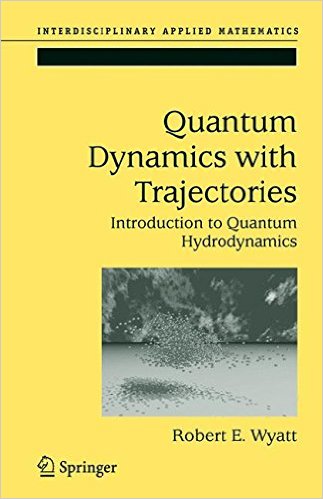 In almost all situations it will do for you what you want a velocity to do. Just don't try to get it to do more than you want by expecting it to be too classical. For instance the expectation value of momentum could be zero in an energy eigenstate, even if the probability current is zero everywhere.

But it might be what you need if you are looking for something.

“In quantum mechanics, due to Heisenberg's uncertainty principle, the notion of a particle trajectory does no longer make sense. QT is probabilistic not deterministic.. ...no definite trajectory.

Not the answer you're looking for? Browse other questions tagged quantum-mechanics quantum-interpretations or ask your own question.

26
Has a double slit experiment ever been done using a track chamber or even contemplated?
4
Uncertainty principle and the speed of light
7
Is the trajectory of a quantum particle a well defined concept and how does this depend on the interpretation of quantum mechanics?
2
How does quantun mechanics explain motion of an object

3
How can "quantum particles have positive masses, even though the classical waves travel at the speed of light"?
4
What really is a particle?
8
How to understand the motion of a particle in Quantum Mechanics?
22
Why are particles in Quantum Mechanics indistinguishable?
3
What exactly is the relationship between the algebraic formulation of Quantum Mechanics and the geometric formulation of Classical Mechanics?
7
Don't these experiments suggest that locality has to be abandoned in the quantum realm?
1
If a potential function in 3D doesn't have bound states in quantum mechanics, does that mean it doesn't have non-circular orbits in classical physics?