I just saw this pic 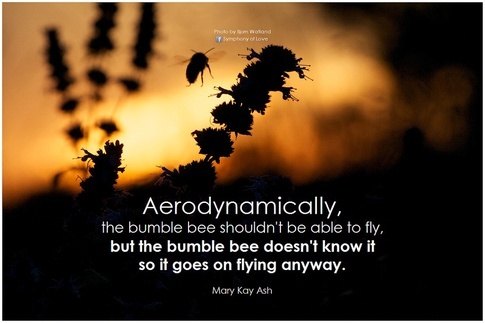 So I got curious and logged in on physics.stack first time, is it true? I am a math major and usually wander on mathstack but I would like to understand why Bumble bee cannot fly according to physics laws but still do? I am only familiar with high school physics, no aerodynamics at all. If some one can explain it to me in easy terms, I'll be obliged.

aerodynamics biology
Share
Improve this question
edited May 25, 2015 at 20:52

If bumblebees were propelled the way fixed-wing aircraft are propelled, their wings would not be aerodynamic. An airplane needs two devices to become and remain airborne. Its engines generate thrust, and its wings provide lift.

A bumblebee, however combines both thrust and lift into one integrated device. The bumblebee's wings, unlike a fixed wing aircraft, and unlike even a helicopter's blades, operate independently of each other. They oscillate, rather than rotate, and create a powerful vortex above them that generates considerably more lift than a fixed-wing aircraft, and their independent wings create more maneuverability than a helicopter's fixed blades.

Although a bumblebee is an inefficient flyer, it's large thorax and nectar-fueled energy consumption overcome the small size of its wings.

This is not true. The rumor comes from a paper written in the 30s. The scientist, Antoine Magnan, who made the paper did his calculations wrong and retracted the paper, but, of course, the media wouldn't listen.

Not the answer you're looking for? Browse other questions tagged aerodynamics biology or ask your own question.

6
Is it really impossible for Bumblebees to fly?

6
Is it really impossible for Bumblebees to fly?
10
Why airplanes fly: the final truth
4
Why ballasted gliders fly faster?
12
How do eagles fly slowly for a long time?
2
Why do papers fly off the wall when you run past?
3
How is the Falcon 9 aerodynamically stable while ascending?
0
Why can a helicopter fly upside down?