What can change a photon's frequency?

I found this question: Is it possible to apply force to a light particle?

What I ask myself is whether the propagation of light from one medium to another could somehow change its frequency and whether we can find other phenomena in general (one is gravity) that might change the frequency of a photon.

Some suggestions from the answer of the mentioned question are that the frequency can be changed by the expansion of space, spontaneous pair-production, scattering and red/blue-shifting events. So if you can elaborate on these suggestions regarding the two cases mentioned above, you would help me a lot.

That is, is possible to change light's frequency regarding the two cases above and are there phenomena like those mentioned that could produce such a change?

Note: I have also found this question, but I ask for a more general treatment than only light propagating in air and I'm concerned with phenomena that might have such effects.

The photon is an elementary particle.

There are two ways to measure the frequency and therefore the energy of the photon since its energy E=h*nu .

This is the spectrum of iron.

Each line is composed of zillions of photons with that frequency. If one sent one photon at a time to the grating , it would slot in the correct location for its wavelength and therefore its frequency would be known.

Diffraction gratings have shown changes in the spectra coming from stars and galaxies, of known atoms compared to the ones in earth, with blue shifts and red shifts.

The analysis of these spectra shows that the change in frequency is due either to the velocity of the star/galaxy with respect to us, or to the effect of a gravitational well. The latter has been measured in on an earth experiment. When these are taken into account, an overall red shift that shows that everything is receding from the earth has led to Hubble's law and the need for an expanding universe.

In regards to your question: Can the frequency of light change in propagation from one media to another, the answer is no. I found a previous response to a similar question that might help you:

But speed and wavelength change as the material on the other side may be different, so now it might have a longer/shorter size of wave and so the number of waves per unit time changes.

Gravity can change frequency. A light beam going towards a massive body is blue-shifted by the gravitational field. If it is escaping a gravitational body, then it is red-shifted. 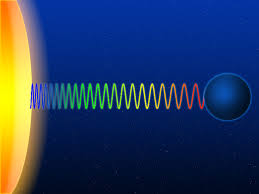 Here we need to be careful with the fundamental idea of energy conservation while thinking that photons remain intact and frequency changes or that a process consumes a photon and produces another of a different frequency. The frequency of a simple pendulum depends only on the length of the string and the change in gravity. In the photon case, it was told frequency also depends on the gravitation field!

6
Can we change a photon's frequency in mid-air?
5
Is it possible to apply force to a light particle?

6
Can we change a photon's frequency in mid-air?
1
How in detail the rotation of the electric field component of light during transition through a polarizer takes place?
1
Atom excitation: what changes, amplitude or frequency?
3
Can High Energy Light Escape a Black Hole after Low Energy Light Cannot
6
Frequency of light versus frequency of electron vibration
2
Does a 9,192,631,770 Hz hyperfine transition create 9,192,631,770 photons per second, or fewer?
0
Frequency of EM waves in classical and quantum physics