Consider a tank full of water with a constant cross-sectional area A1 placed vertically on the ground. Now someone drills a hole of an area A2 in the bottom of the tank, and the liquid starts escaping through the hole with af velocity v2. At the same time the open surface of the water in the tank will drop with a velocity v1. In order for the mass to be conserved, the following must be true (the water is assumed incompressible):

We are interested in v2. Here is how everybody derives it:

Take bernoulli's equation and assume that the pressure is on the top and the bottom of the cylinder is just atmospheric:

Everybody who has solved this problem makes the following assumption at this point:

"since A2 << A1, then v1≈0" (which follows from the first equation) This simplifies the equation above to Torricelli's law:

But what happens if we don't make that assumption about the hole size and just plug the first equation in? Can this really be true?: 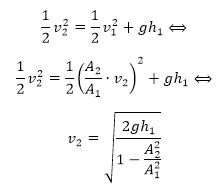 If one removed the bottom of the tank completely, so that A2 approached A1, then the velocity would approach infinity... this is obviously not possible (if one removes the bottom of the tank, then the water should just behave as a free falling object, right?) I have found others, who have derived the same function for v2(h) as that above (eg. first answer in this thread: "Velocity with respect to time in Torricelli's Law"). -And this simulation crashes, if one sets the two areas equal: http://demonstrations.wolfram.com/TorricellisTheorem/.

So the question is: What effect does it have, if we remove the assumption that "A2<< A1" in the derivation of torricelli's law? 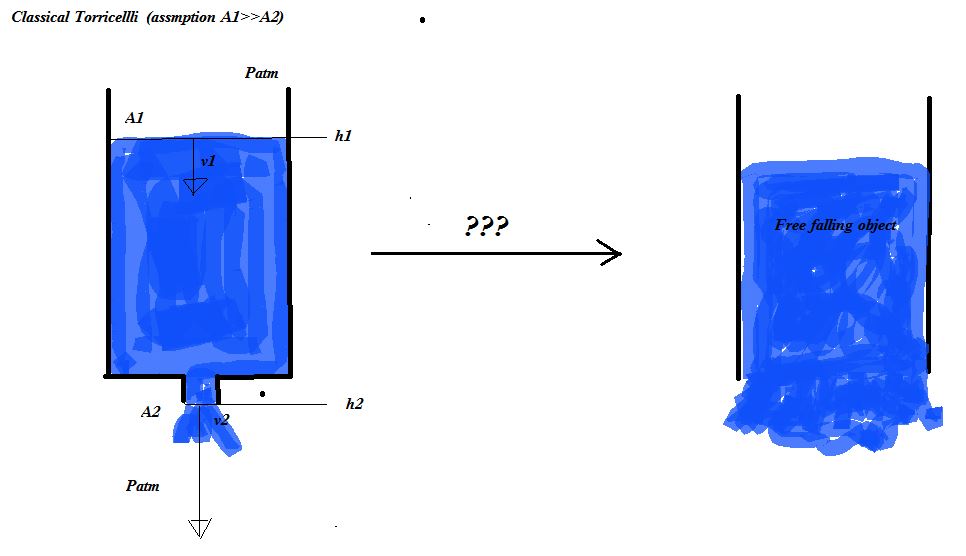 I don't think this is as large of a problem as it seems.

Consider the steady state assumption in more detail. $v_2$ is the final velocity going through the hole after sufficient time has passed for the acceleration to occur. Right after you open the hole everything is stationary. There is an acceleration phase which is normally assumed to take a short amount of time.

This assumption is distinct from the $A_1 \gg A_2$ assumption, but the combination of them wreck havoc on the scenarios where the hole is large compared to the water's surface area. After all, $h_1$ is in the expression for $v_2$. That means we have two factors at work 1) initial acceleration of the fluid suppresses the speed early on and 2) depletion of the water level suppresses the speed toward the end of the flow. So to answer your question:

So the question is: What effect does it have, if we remove the assumption that "A2<< A1" in the derivation of torricelli's law?

I think you did it correctly. Infinite flow is predicted due to obviously incorrect assumptions. It simply doesn't have time to accelerate before the water level substantially decreases, and you could use this to derive some very clear bounds of applicability, outside of which, the flow never gets close to the equation's prediction.

To answer your question :-

But what happens if we don't make that assumption about the hole size and just plug the first equation in?

In applying BE directly to derive Torricelli's Law (TL) we are treating the fluid in the tank as if it were such a stream tube. In particular the requirement for steady flow means we must have $A_{2} \ll A_{1}$, and hence $v_{1} \ll v_{2}$, so that over a small time interval $\Delta t$ the fluid level drops only a very small amount. When there is a significant velocity $v_{1}$ this assumption breaks down - the steady flow approximation is no longer a good one. A simple experiment shows that in practice exit velocity does vary with time as the height falls, and hence that there is not actual steady flow, but only approximately so when $A_{2} \ll A_{1}$. Also with a greater $A_{2}$ there is the possibility of significant turbulence in the flow.

To see exactly how this steady flow approximation is necessary and also to answer your question :-

"How would you derive Torricelli's law without Bernoulli's equation?"

we can consider the body of fluid over a short time $\Delta t$ and the work energy relation for it. (Note the tank may have a complex shape, with curved sides and bottom). The derivation of TL below parallels the derivation in the above book of BE for a stream tube under steady flow, but I have discussed in a bit more detail the simplifying assumptions needed for TL regarding the forces acting on and inside the fluid, and noted how the steady flow approximation is needed to simplify calculation of $\Delta KE$. This shows why TL fails to apply in certain situations, such as the one in your post. The work energy relation is 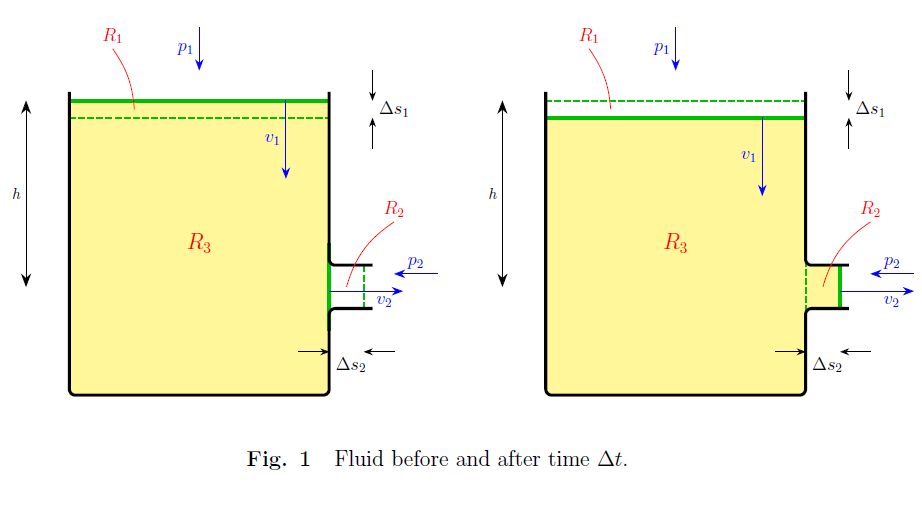 The above work energy relation is applicable to any body or system of particles (where Newtonian mechanics is applicable). In this case the NC forces comprise all forces other than gravity. These NC forces acting on the fluid comprise :-

Another scenario where TL breaks down is discussed in the SE question 'Why does Torricelli's law seems to fail when water speeds up after I put my finger in a hose?', where a tank is drained from a hose attached to the exit hole, and efflux velocity is observed to increase if a finger is placed partially over the hose end. Here TL breaks down because of the assumptions regarding $W^{(NC)}$ no longer being valid - friction plays a much greater role within the narrow cross-section of the hose than it does along the wider boundaries of the tank, and some turbulence is introduced. The overall flow is more complex than the simplified scenario of TL. Friction contributes a negative amount to $W^{(NC)}$ and reduces KE from the value given by TL. (TL states that all the PE loss is converted to KE at the exit). Narrowing the hose exit also introduces a force on the fluid, causing inelastic collisions and KE loss, but due to its slowing effect also has the effect of reducing friction within the hose. Even if overall KE was less due to narrowing the hose exit, the exit speed could still increase since volume flow rate of fluid = Av, and A has decreased.

Another interesting experiment to try with TL is a case where $p_{1} \neq p_{2}$. Here we find counter-intuitively that exit velocity is ZERO :-

Drill a hole near the bottom of a plastic bottle and fill it with water and screw the cap on - the water will then not flow from the hole at all! (I have tried this with holes of diam 3mm and 8mm). What has happened is that the air cavity above the water has expanded slightly (about 1% or so), as the water level falls slightly, so that the pressure (by Boyle's Law) falls approx by 1% (ie a few cm's of water pressure - note 10m water pressure = 1 atm = approx 100,000Pa). The water pressure at the hole then just equals atmospheric pressure, so no flow occurs. In other words we have $p_{1} < p_{2}$, and $p_{1} - p_{2} = -\rho gh$ - and hence from the above equation $v_{2} = 0$. If we tilt the bottle to the side gradually a point comes where water level is reduced sufficiently to cause lowering of the pressure just inside the hole enough below atmospheric pressure so that air forces its way into the hole, causing a stream of bubbles to flow up into the air cavity. Unscrewing the cap whilst the bottle is held vertically will immediately cause $p_{1} = p_{2}$, and the water will flow out the hole, (and TL will be valid again). Screwing the cap shut again will immediately stop the flow. TL fails here because $p_{1} \neq p_{2}$. The principle of this experiment is the same as the well known upside-down cup of water with a card experiment.

A case where the assumption $A_{2} \ll A_{1}$ could break down yet not be a problem, is when using TL to calculate emptying times for certain shapes of vessel, eg a horizontal cyclindrical tank, where $A_{2} \ll A_{1}$ is clearly not valid when the fluid level is close to the top or bottom of the tank. However a valid formula is obtained for all levels not too close to the top or bottom, and in the limit this still gives a good approx to the emptying time.

(This formula, obtained by solving a differential equ is :-

Bernoulli's principle is a simplification of the Navier–Stokes equations, namely it assumes constant density and steady state.

In the situation where $A_2$ has almost the same surface area as $A_1$ it will be hard to satisfy the assumption that the system is steady state. In real life there will also be some frictional losses, but if you neglect those then you can indeed say that the liquid is in free fall, thus the velocity will increase linearly over time and thus steady state will never be achieved.

Not the answer you're looking for? Browse other questions tagged fluid-dynamics kinematics flow approximations bernoulli-equation or ask your own question.

2
Velocity with respect to time in Torricelli's Law
2
How does the size of the hole affect the exit velocity?
0
Speed of container having a small hole on the side, filled with an ideal liquid kept on smooth horizontal floor