Why does energy need to be quantized to explain black body radiation? Wouldn't the approximate normal distribution of the kinetic energy of particles at a certain temperature be sufficient, ie. few particles have high enough energy to oscillate at higher frequencies.

To explain why, you have to go back to something known as the ultraviolet catastrophe. In classical physics, one uses the Rayleigh-Jeans law, which states that "intensity is proportional to temperature divided by wavelength to the fourth power". The expression looks like this:

where T is the temperature in Kelvins, lambda is the wavelength, and k is Boltzmann's constant. The problem with the Rayleigh-Jeans law in describing blackbody radiation is that it works well enough at long wavelengths but fails at short ones. As you go to high frequencies, the radiated energy tends toward infinity. This is observed in the following graph: 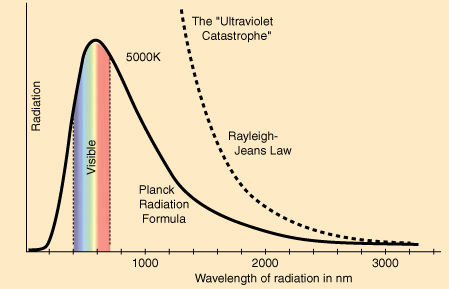 Thus, there is a mismatch between observation and prediction in the account of cavity radiation given by the Rayleigh-Jeans law. This is due to the fact that the law was based on classical physics, which assumed a continuous energy distribution. Then, along came Plack. Planck proposed that electromagnetic radiation comes in discrete packets or quanta. Planck used the equation:

where h is a constant of proportionality known as Planck's constant. What Plack proposed is that energy is emitted by a body in integral multiples of hv. A consequence of Planck's hypothesis was that low temperature bodies would emit low frequency radiation (corresponding to low-energy quanta), while high temperature bodies would be more likely to emit radiation of high frequencies (high energy quanta). Even though Planck's assumption was essentially ad hoc, it explained all the experimental data and the blackbody curve, and was thus accepted. It was not until later, when Einstein used the quanta hypothesis to explain the photoelectric effect, that there was a deeper explanation of the quantization of energy.

7
How can blackbody radition be explained by quantization?