If mesons were stable could they form atoms?

if there were stable enough mesons similar to protons and neutrons could they capture electrons to form exotic elements.

if not why is this not possible?

As anna mentioned, there are non quark models which clarify exotic hadrons. In principle, they are allowed in Quantum Chromodynamics (QCD). Non-quark models predict

2.Glueballs: Gluons are their own bound states.

3.Exotic hadrons as in figure below

which exchange pion at low energies (couple of GeV scale) and can form a new bound state of multi-quarks as a $DD$ molecule. $D$ meson is one of the lightest meson which is very unstable check pdg list, indeed. It's mean life time about ~$10^{-15} s$.

Above these thresholds, there are some expected exotic hadrons which do not contribute quark model. 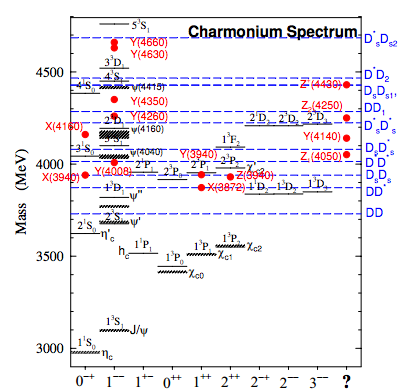 Big experiments such as LCHb, CMS at LHC, are trying to solve this puzzle. And so far, they observed X(3872), Z(4430), Y(4140) which are candidates of exotic hadrons. They did not fit into the quark model because they have unexpected narrow width and also unlikely branching ratios . These new particles are expected to have a non-quark form such as multi-quark exotic hadrons. The analysis of these particles still ongoing.

The fact of the matter is that there are no stable mesons, that might conceivably form states bound by the strong force, as the nucleus is bound. Within the nucleus there exist virtual mesons, i.e. described as pions etc but not on mass shell

It is true that the neutron is also unstable outside the nucleus, decaying with the weak force. But no stable mesonic kernels have appeared in the scattering experiments. Pion proton scattering for example produces resonances that are even more unstable than the pion. There are no models within the standard model that would form a nucleus of just mesons and suggest experiments that could test this.

In contrast long lived particles even though decaying through the weak interaction, do form exotic atoms, replacing electrons in the potential well of a nucleus , for example the muonic atom.

In a muonic atom (also called a mu-mesic atom), an electron is replaced by a muon, which, like the electron, is a lepton. Since leptons are only sensitive to weak, electromagnetic and gravitational forces, muonic atoms are governed to very high precision by the electromagnetic interaction.

A hadronic atom is an atom in which one or more of the orbital electrons is replaced by a charged hadron. Possible hadrons include mesons such as the pion or kaon, yielding a mesonic atom; antiprotons, yielding an antiprotonic atom; and the Σ− particle, yielding a Σ− or sigmaonic atom

All these are not stable, due to the inherent instability of the replacer of the electron.

Here is a study of a hypothesized pionium state , a p+pi- bound state , the terminology meaning the pions bound by the electromagnetic force, similar to positronium. One needs a library, but as there are no follow ups in google, it probably is a one off theoretical speculation.

Not the answer you're looking for? Browse other questions tagged standard-model atoms subatomic mesons or ask your own question.

6
The Makeup of the Pentaquark

3
Could Quark model turn out to be false?
8
Why do quarks and antiquarks tend to bond in groups in which the number of quarks minus the number of antiquarks is divisible by 3?
11
What is the color of a group of trillions of electrons, protons, and neutrons
6
Why are all mesons unstable?
2
Why is usual matter made up of $n,p$ and $e^-$?
1
What are the minimum/realistic energies needed for positron/electron annihilation to form $D$ mesons?
2
Could a Λ or Σ baryon be stable inside a nucleus?