$F=ma$, so if acceleration is zero the force must also be zero?

I was just pushing a huge rock which I couldn't move at all. Given that the acceleration was zero as a result of my efforts, since $F=ma$, doesn't this mean that the force must also have been zero?

But, in reality, I was applying a force $F$, there is a huge rock with mass $m$, but the acceleration $a$ I observed was zero. So does this mean physics denies the existence of my applied force? How can I reconcile this contradiction?

The confusion comes from how you have written the equation. If you write it like this $$F_{net} = ma$$ it will be easier to see your error. You are exerting a force on the boulder, but net force is zero. This means that other forces such as friction are canceling your force out. 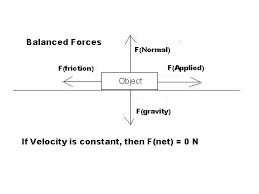 It is the net force, not force.

Force = mass * acceleration is the basic simplified version of the equation. There are more complected formulas available for this that take into account more complicated scenarios; like taking in the account of different forces coming from different directions like in your scenario.

force = the derivative of its linear momentum

This type of question keeps reccuring. I suppose either teachers don't teach this correctly, or students do not pay attention in class. $F=m a$ is really $$\sum F = m a_{cm}$$ These two distinctions (the sum, and the acceleration of the center of mass) make all the difference in the world (At least read on Newton's Laws of motion).

At all starts from the following principles:

Understand all these steps and you will be able to understand any situation involving linear motion.

1
Force when acceleration is zero
2
Confused about Newton's 3rd law
1
If I am moving an object by my thumb at a constant velocity, does it mean I am applying a force on it?
0
Joules taken to apply an acceleration