How can tangential acceleration from a radial force be explained?

A mass is attached to a rope, and put into a circular motion. If I pull the string from the center, the tangential speed of the mass will increase (by conservation of angular momentum).

I am applying a force only in the radial direction, so how can the tangential velocity increase if there is no tangential force?

newtonian-mechanics forces work
Share
Improve this question
edited May 23 '15 at 6:53

The object will move in a curved path whose center is not where I am pulling from. This center, my hand and the mass form a triangle whose lead angle might be positive or negative depending if the speed of the mass is increasing or decreasing. 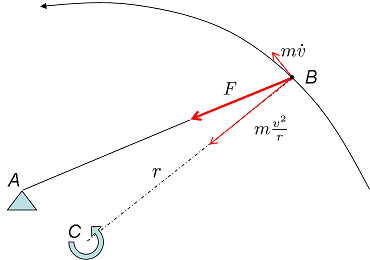 Consider the body above at B moving along the indicated curved path (like a closing spiral). While pulling from A with a force $F$, some of the force goes into rotating the mass about C (the $m v^2/r$ part) and some into accelerating the mass (the $m \dot{v}$) part.

A mass is attached to a rope, and put into a circular motion. ... I am applying a force only in the radial direction, so how can the tangential velocity increase if there is no tangential force?

For short, I'll call the mass attached to the rope a "rock". So how does the rock gain angular velocity? If you truly are applying a purely radial force, and if you aren't shortening the length of the rope between your hand and the rock, the answer is that it can't. Radial forces do zero work. If you keep the length of the rope constant and you apply the force radially toward a fixed location, the angular acceleration of the rock about that fixed location is identically zero.

Think of how you get the mass at the end of the rope (I'll call it a "rock" from now on) moving. At the start, your hand makes a big circle about your body / above your head. You gradually tighten up that circle your hand makes as the rock starts moving about you.

Only a radial force is applied so that angular momentum $L=rmv$ is conserved,

The force imparts an impulse on the system. So the system is starting to move towards a new equilibrium with shorter radius.

The constraint $$ r\, dv = -v\, dr $$ now means that for negative $dr$ the system picks up a positive angular acceleration.

There are a lot of very physics-y answers here, so I'll give a more real-world example to help you wrap your head around the idea.

5
Speed of the rotating block
1
Force responsible for increasing a spiraling object's tangential velocity
0
Why does the amplitude of a pendulum increases when continuously changing the rope length?
1
How can centripetal acceleration change the speed?
1
What force provide tangential velocity change in whirling block problem?
4
Possible to make full loop on a swing only by “pumping legs”?
1
Conservation of energy in rotational motion
0
Does an orbiting body accelerate?
0
Angular acceleration - radial & tangential