Can someone give an intuitive understanding of Fano Resonance?

I'm reading about Fano resonances, and the line that almost every source I can find gives is something like (from wikipedia):

The Fano resonance line-shape is due to interference between two scattering amplitudes, one due to scattering within a continuum of states (the background process) and the second due to an excitation of a discrete state (the resonant process).

This doesn't really explain anything to me though. I found this paper in which they provide a classical analogy for it using oscillators, but I found it to be more convoluted than helpful (I'm sure it's true and interesting, but didn't clear anything up for me).

Can anyone give a more intuitive explanation? Why does having one discrete set of states and one continuum set of states give rise to this?

I'm not too sure of why this is a problem, because it really does just come down to what Wikipedia states:

The Fano resonance line-shape is due to interference between two scattering amplitudes, one due to scattering within a continuum of states (the background process) and the second due to an excitation of a discrete state (the resonant process).

That is, you have a Hilbert space that has both continuum and discrete states in the same energy region, where the discrete states are different to the continuum ones and therefore orthogonal to them. Thus, you could hope to be able to put population in the discrete state and have it sit there, but this turns out to be impossible: any amount of coupling (e.g. even just a perturbation) will cause mixing between the two sectors, so what you get instead is a highly structured continuum.

The clearest and cleanest example, I think, remains as in Fano's original paper ─ the autoionizing $2s\,2p$ state in helium. This is an interesting combination: you've taken the ground-state configuration, $1s^2$, and then

Now, here's the thing: this double excitation actually requires more energy than it takes to ionize the atom to begin with, i.e. to take the first $1s$ electron and just shoot it off into some continuum state $|1s;\chi_E\rangle$, leaving the remaining clanker in the $1s$ state.

This is a funny combination, but if you'll believe naive Hartree-Fock, there's this valid eigenstate $|2s\,2p\rangle$ sitting at that energy, so you should be able to, say, use a laser to excite the atom to that state, and then bring it back down through stimulated or spontaneous emission, and because the states of the core ($1s$ and $2s$) are different, the discrete state is orthogonal to the continuum, $$ \langle 2s\,2p | 1s; \chi_E\rangle = 0, $$ and you should be able to ignore the continuum.

The reality, of course, is rather different, because there are non-Hartree-Fock effects (called Configuration Interactions) which mean that no matter how well you choose your discrete and continuum orbitals to be strict eigenstates of the single-electron Hartree-Fock hamiltonian $H_\mathrm{HF}$, there is still a nonzero matrix element for the full hamiltonian coming from the correlation interaction, $$ \langle 2s\,2p |\hat{H}_{ee}| 1s; \chi_E\rangle \neq 0. $$

These are the essentials for a Fano-like process: a continuum and a discrete state, and they need to live in orthogonal sectors of Hilbert space (or, equivalently, in a direct sum of different Hilbert spaces), with some additional coupling between them.

What this means is that if you shine light of the relevant energy on your helium atom, it won't be able to just excite a discrete state and bring it back down, and the atom will always ionize, as if you were just going directly from the $1s^2$ ground state to the $| 1s; \chi_E\rangle$ continuum, but the presence of the discrete state makes things more complicated, because processes of the (informal) form "first excite to $2s\,2p$ and then ionize to $| 1s; \chi_E\rangle$ via the $\hat{H}_{ee}$ coupling" also contribute. Moreover, those contributions will add coherently, which means that you can have destructive interference between them at some energies, leading to asymmetric and more complicated lineshapes.

OK, so hopefully that added bit of background can help make sense of what's going on. Having said all of the above, I'll also address this part of the question, as an example of what doesn't work:

What you're describing here is indeed a Hilbert space that has a continuum $|\chi_E\rangle$ and a discrete part $|d\rangle$, but here they are combined via a tensor product, $$ |\chi_E\rangle\otimes|d\rangle, $$ instead of a direct sum, i.e. they form a single state, the way you combine discrete (angular momentum) and continuum (energy) aspects to make a single atomic continuum state, instead of a structure where you can form superpositions of the continuum and the discrete states.

If you really want to describe a Fano resonance with an electron gas, then what you need is some kind of "side track" that's parallel to where the continuum sits, i.e. something like this 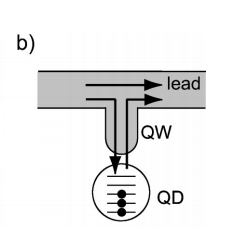 as described in this paper (and indeed also in your second link), where you ditch one of the dimensions of the 2DEG to just make a quantum wire, and then you put your quantum dot off to the side.

Here, to a good approximation, the quantum dot is happy on its own and the quantum wire just goes straight through, but if the dot is close enough to the wire then there can be some amount of tunnelling from one to the other and vice versa, and this then couples the states in the two.

That means, then, that if you send an electron in from the left, there is some probability amplitude for it to tunnel out into the quantum dot, hang out there for a while, and then tunnel back in and keep going to the right; moreover, this process will add coherently with the simple propagation that just goes straight through, and the two can interfere both constructively and destructively, making for a more complicated (Fano) lineshape in the conductance.

Not the answer you're looking for? Browse other questions tagged optics resonance or ask your own question.

3
Is the photon truly not absorbed in Raman scattering?
1
In general terms, what key elements are necessary for resonance to exist in a physical system?
0
Encoding multiple images in 1 beam
0
Could someone explain the Forster Resonance Energy Transfer?
2
Can there be resonance in electromagnetic waves?
0
Explanation of problem 2074 in Lim-Yung-Kuo's Problems and solutions in Optics
0
Understanding a resonance experiment
31
Why is the sky *uniformly* blue?
0
How to calculate properties of a coupled electromagnetic / mechanical oscillator?