Phase added on reflection at a beam splitter?

Which is it, and why?

It actually depends on what kind of beam spitter you have.

I'll give a general treatment and shows that the conclusions of both Emilio Pisanty and Steven Sagona are basically correct, corresponding to different specific beam splitters, which are all common in the laboratory. For simplicity we don't consider loss in this answer.

First of all, the definition of "phase shift" in this specific answer is chosen as the relative phase between reflected and transmitted light from the same port. More specifically, we let the transmission coefficient to be real number $t$, and the reflection coefficient will thus carries the information about relative phase shift $r e^{i\theta_\alpha}$, where $\alpha=1,2$ representing the light coming from beam splitter port 1 or 2 (see picture below). 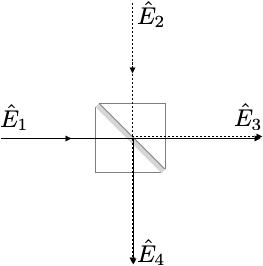 Instead of assuming symmetrical phase shift, we allow any possible phase shift, as we are discussing general beam splitter which is not necessarily symmetric.

If we have a beam splitter with symmetric phase shifts, $\theta_1 =\theta_2 = \pi /2$, then \begin{equation} M= \begin{pmatrix} t & ir \\ ir & t \end{pmatrix} \end{equation} This is consistent with Steven Sagona's argument based on the same assumption.

Your confusion stems basically from comparing results in different conventions.

Basically, there is always a phase difference of $\pi$ between the two output ports of a beam splitter, but this can only ever be 'morally' true, because that statement talks about the phase of the EM field at different points, and thus the phase will be different depending on where exactly you fix your measuring point on the two input and the two output ports. In situations where you have two waves co-propagating, then their relative phase is perfectly well-defined, but for the ports of the beam splitter, you're comparing phases at different beams in different positions and moving in different directions, so the whole thing is impossible without some artificial way to fix the convention.

What you do need is for the matrix governing the coupling to be unitary, which comes from a strict requirement of energy conservation.

More precisely, when we say that the beam splitter can be described by a matrix, we are making two core assertions about the electromagnetic fields we're considering:

Both of these sets of modes are bases for the same linear subspace of field modes, which means that each set can be expressed as a linear combination of the other set; in other words, that means that the amplitudes of each set of modes are related via some matrix.

(Why unitary and not just having unit norm on each row or each column? Because the beam splitter needs to conserve $\sum_{j=1}^2 |\alpha_{x,j}(t)|^2$ both for cases where the input is on only one of the input ports, but also for cases where there's light on both. If the matrix isn't unitary, there will be a superposition of input beams that will have a different output energy than the sum of the inputs.)

All of the above is crucial for a correct hamiltonian classical-field-mechanical description of the beam splitter. Once you've done it correctly (but only after you've done the classical mechanics correctly), you're ready to move on to the quantum mechanics of the system, which is now very easy: since you've done the classical mechanics correctly, all you need to do is to replace the hamiltonian canonical variables with annihilation operators, $$ \alpha_{x,j}(t) \mapsto \hat{a}_{x,j}. $$ and you're done.

What you don't have, because you didn't have it on the classical fields, is any additional restriction on what the phases must be, either of $\pi/2$ or $\pi$ or anything, because (again) those are just doomed attempts at comparing phases on different places, which cannot be done to any absolute or objective standard.

The answer is $\pi/2$. Interestingly, it doesn't matter if it is plus or minus $\pi/2$ or if the phase change is in transmission or reflection in analysis of quantum or classical interferometry.

From the above referenced article:

"Quantum optics essentially provides black-box models of the beamsplitter. They all agree on the existence of a π/2 phase-shift, even if its sign and precise location (on the transmitted or reflected beams) are uncertain. Such inconsistencies, however, are not critical for what concerns the respect of energy conservation principle."

This is something that is often handwaved in quantum optics, and I think it's pretty confusing. Here is one explanation that is pretty simple but confusing. It says almost dogmatically that the beamsplitter operator has to be unitary. This is helpful to getting the "correct answer" but not helpful in developing an intuition for what is actually going on.

In a pretty standard way, we can remove a "global phase" of $e^i\theta_R$. I can explain this in more detail if anyone is confused by this step. Now let's find the sum of probabilities of both reflection and transmission:

Which, with a trig relation reduces to

People throw around math equations and say unitarity a lot, but I think going through this example makes it much more clear what is going on. Our constraint of having probability = 1 for both individual and superposition cases require our phase to be $\pi/2$.

This is often why the beam splitter model is called "phenomenological", because it simply tries to fit the parameters to the data without reaching a mathematical contradiction. (As opposed to maybe trying to model the actual Hamiltonian of the material that is splitting the light)

People get very excited when it turns about quantum. And generally one has the answer: "phase does not matter in quantum states", but it is not because that it does not matter that it doesn't exist! In the case of the beam splitter the phase is determined by the optical structure properties of the chosen BS. In the case of two dielectric layers of different indexes the Fresnel equations (esaily derived by Maxwell's equations) show (because of the index difference n1-n2 factoring the reflexion coefficient) thta reflected beams have opposite signs when incident on one side or the other of the BS. This is pure Optics and cannot be discarded.

Not the answer you're looking for? Browse other questions tagged quantum-mechanics electromagnetism optics polarization quantum-optics or ask your own question.