Does the dynamical Casimir effect generation of real photons create energy from nothing?

So is this genuinely the creation of energy via the casimir effect, if so it seems extraordinary and a violation of the principle of conservation of energy. Is there any other example of energy being created or destroyed, i have seen Hawking radiation mentioned in comparison, but here the creation of the 'real' photons from the vacuum is balanced by negative energy photons falling into and shrinking the black hole, so energy is conserved.

So is this genuinely the creation of energy via the casimir effect, if so it seems extraordinary and a violation of the principle of conservation of energy.

You gave no link, but I discovered the following by googling:

The experiment is based on one of the most counterintuitive, yet, one of the most important principles in quantum mechanics: that vacuum is by no means empty nothingness. In fact, the vacuum is full of various particles that are continuously fluctuating in and out of existence. They appear, exist for a brief moment and then disappear again. Since their existence is so fleeting, they are usually referred to as virtual particles.

Chalmers scientist, Christopher Wilson and his co-workers have succeeded in getting photons to leave their virtual state and become real photons, i.e. measurable light. The physicist Moore predicted way back in 1970 that this should happen if the virtual photons are allowed to bounce off a mirror that is moving at a speed that is almost as high as the speed of light. The phenomenon, known as the dynamical Casimir effect, has now been observed for the first time in a brilliant experiment conducted by the Chalmers scientists.

The motion of the mirror will give the energy necessary so that the virtual particles become real. No creation out of the vacuum.

Only lines entering or leaving the diagram represent observable particles. Here two electrons enter, exchange a photon, and then exit. The time and space axes are usually not indicated. The vertical direction indicates the progress of time upward, but the horizontal spacing does not give the distance between the particles.

The photon is virtual representing the propagator in the mathematical formula for calculating the crossections for this interaction. For the photon to become real it has to be leaving the interaction area.

The same is true for the virtual loops in the casimir effect: 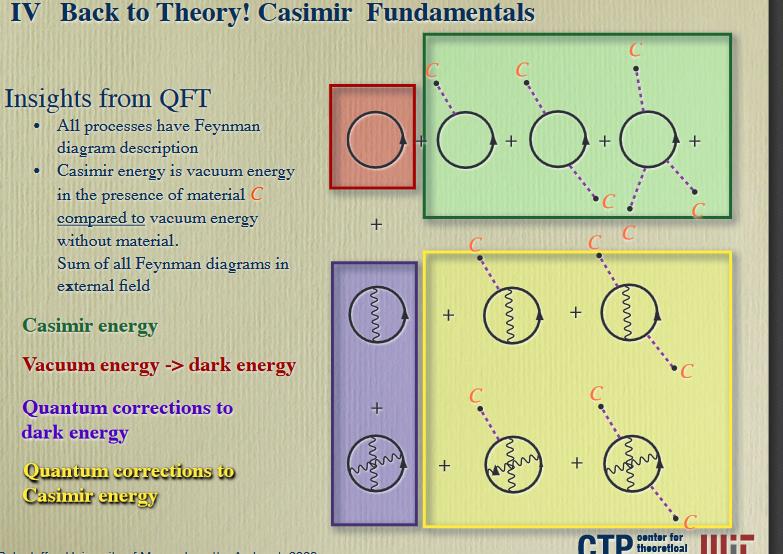 All diagram lines between the material C are virtual, mathematical functions. To become real photons ( the dashed virtual ones) energy has to be supplied by an external vertex. In the simplified description of the experiment above, the energy is supplied by the kinetic energy of the molecules of the mirror, a virtual photon from the Casimir loops interacts with a molecule's electron and gains energy as a real outgoing photon:

There is no energy out of the vacuum.

One has to put energy into the system in order to set up the experiment, which is then released by the vacuum.

You could compare this to putting an object high above the Earth, and then letting it fall. The acceleration of the object doesn't mean you are are getting energy for free, or somehow extracting it from the Earth's gravitational field (this statement is ambiguous - what I mean is that the gravitational field isn't weaker than pre-experiment in order to compensate for the acceleration), you are just getting back the energy you put in when you set things up.

Not the answer you're looking for? Browse other questions tagged energy-conservation casimir-effect or ask your own question.