Does the equation CV = q break down when V is small or a wire is very long?

I'm trying to understand how the equation $CV=q$ relating the voltage difference and charge stored on a charged capacitor breaks down under extreme circumstances. In most problem statements that I'm seeing, they might begin with a capacitor attached to a battery via a circuit and an open switch. They'll say that when the switch is open, the voltage difference between the two ends of the battery is $120 V$. Then, when the switch is closed and when the capacitor is fully charged the stored charge on each plate will have magnitude $|q| = 5 C$. Finally, the problem will ask me to calculate the capacitance of the capacitor.

If the closing of the switch and the charging of the capacitor can change the potential difference, when is this change in potential difference significant? Is it ever significant to an electrical engineer (even if such a circumstance is an outlier)? Or is it only detectable in the most extreme of circumstances, ones that no electrical engineer would ever have to deal with? (i.e. when V is very small or there is a very long wire over which the excess charge can redistribute itself?)

The equation $Q=CV$ assumes linear behavior of the capacitor - in reality the dielectric of most capacitors has hysteresis as well as a nonlinear component, so as you increase the voltage, the capacitance will change. This effect is particularly strong (and useful) in certain PIN diodes that can be used, when reverse polarized, as voltage-dependent capacitors (handy for electronically tuning RF circuits, for example).

The equation also assumes that $Q$ is only the charge on the capacitor - that no charge accumulates elsewhere. Now the capacitance of a pair of 16 AWG wires separated by 1 cm is almost exactly 10 pF/m - see this handy calculator. So if your capacitor is attached to the battery with a sufficiently long wire, the wire itself will act as a non-negligible capacitor. Again, at RF frequencies (especially when you get up into the GHz range) these "parasitics" really start to add up, and in fact they dominate the behavior of circuits. They are in fact the basis for transmission lines, and definitely are considered important for electrical engineering.

Back to your original question: if you have a battery connected to a capacitor with a pair of wires and a switch, then we usually consider the following simplifications:

At high enough precision, none of these assumptions are true. Let's take them one at a time:

In your example, a charge of 5 C and a voltage of 120 V is possible with a capacitance of $c=\frac{5}{120} F = 42 mF. This is big, but not too unwieldy. I found one online that was 40 mF and 160 V rating; it was 76 mm diameter, by 150 mm long. As I said - quite big. I looked at the data sheet for this family of capacitors but could not find any information on leakage current. However, since this is an electrolytic capacitor, the leakage will be quite large. For example, I found a generic article on the leakage of aluminum electrolytic capacitors which included the following plot as figure 3: 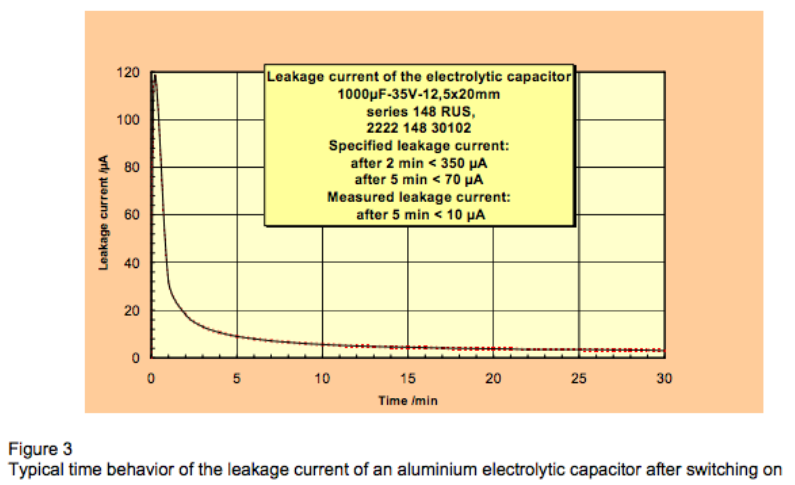 As you can see, there is significant current flowing in large electrolytic capacitors - this was for a 1 mF, 35 V device so you can imagine it will be quite a bit worse for 44 mF, 120 V.

These differences are often much more important than the voltage drop of the battery (which your question was asking about). Long wires plus leakage currents could, in principle, result in a sustained voltage drop across the wires. But as a rule of thumb, electrical engineers will be careful when designing precision circuits (ones where a few mV on 120 V might matter) with short wires; and if you need long runs with a precise voltage at the end of it, you might use local regulation at the far end, or a 3 or 4 wire solution which allows sensing at the remote end so that the voltage source can compensate.

Batteries are not capacitors. Closing the switch doesn't redistribute some fixed amount of charge in the circuit. Instead, the batteries can create new charge through chemical reactions. The redistribution would slightly lower the potential, allowing the chemical reaction to proceed until it comes back to the resting voltage.

While real batteries are not ideal (the voltage they provide is not constant), such effects are not usually modeled for this type of problem. A designer would simply make sure the circuit was valid over a range of voltages. The drop in voltage under current is going to overwhelm any changes in the zero-current voltage.

First, I'm a bit confused by your statement about two batteries.

The capacitance of a two-sided capacitor is defined to be the ratio of the magnitude of separated charge (commmonly, the magnitude of charge on each plate) to the resultant potential difference (aka, voltage) between the plates. It's technically a "what if" formula. The actual capacitance depends on the geometrical and material arrangement of the plates.

We often turn this definition, $C=\frac{q}{V}$, into an operational equation such as $q=CV.$ And this is okay, because, at least to first order (and likely to 2nd and 3rd order) in an ordinary capacitor, the capacitance is independent of the voltage up to the dielectric strength of the gap material. Whatever the voltage across the capacitor, operationally, $q=CV$ where $V$ is the voltage from one plate to the other.

Precisely how this relates to a battery in the circuit depends on what other elements are in the circuit. In a series circuit with a real battery and real wires with real resistance, the voltage across the plates could be slightly less than the emf of the battery while the capacitor is charging. If the capacitor is leaky, then a current will continue to flow and the voltage will continually be slightly less than the emf.

Not the answer you're looking for? Browse other questions tagged electromagnetism electrostatics capacitance electrical-engineering or ask your own question.

3
Potential Difference Between Capacitors in Series
0
Charging a capacitor
4
Filling a charged capacitor with dielectric material
3
Two balls are attached with a very long and thin conducting wire to two conducting plates. How does the capacitor react in this situation?
1
Why doesn't the charge on capacitor plates flow from one plate to the other?
2
Charging Up a Capacitor
1
What is it that drives the electrons from one plate to another through a battery in a capacitor?
0
What will be the steady state Charge distribution of given configuration- battery vs capacitor
1
Why can't only one plate of a capacitor get charged?