If there are an other identical conducting plane $M_2$ parallel to $M_1$ locate at $z=d$ but having opposite surface charge density $-\rho_s$. The region between them is dielectric; this make a capacitor. then $\vec{E}$ in the region between $M_2$ and $M_1$ equal

By using the boundary condition of conductor. The Electric flux density $\vec{D}$ of both plane is 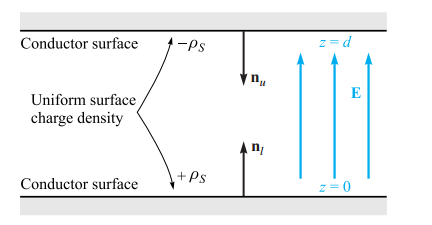 However, by the boundary condition

Is there any way to explain why this happen?

I learned the boundary condition for conductor in free space

The boundary conditions you mention, $$\vec{D} = \rho_s\hat{a}_z$$ are for charges distributed on the surface of a volume conductor, following from the requirement that the electric field is zero inside the conductor. The expression $$\vec{E} = \frac{\rho_s}{2\epsilon}\hat{a}_z$$ is instead valid for a planar sheet of a conductor alone (or for that matter, any material), surrounded by non-conducting material on either side.

Another way of looking at this is that flattening the above conductor to a plane actually leads to twice the charge density i.e. $2\rho_s$, with equal contribution from each boundary. Then, the surface charge density you effectively measure is $\rho'_s = 2\rho_s$, and leads to the expected electric field: $$\vec{E} = \frac{\rho'_s}{2\epsilon}\hat{a}_{out}$$ whereas the boundary condition is in terms of the charge $\rho_s = \frac{1}{2}\rho'_s$ on each of the two surfaces (no matter how nearby).

When there are other charges outside such a conductor, the charge distribution cannot be uniform between the surfaces; if it were so, then there would be a non-vanishing electric field inside the conductor. In fact, in these cases, the charge distribution re-arranges itself so that the two 'golden rules' for conductors - Gauss' law, and the boundary condition (or equivalently, no electric field in the volume) are always satisfied.