Solutions of symmetric equations are not invariant - is symmetry spontaneously broken?

Spontaneous symmetry breaking requires more than two distinct solutions to a system of equations, because there are often physical considerations not captured in the equations that determine the solution or combination of solutions chosen.

For example, take the 1D elastic collision between two objects of equal mass, one stationary and one initially moving at speed $v_0$. Momentum and energy are conserved, so after the collision

(These aren't exactly what you posted, but the concept is the same.) There are two solutions, one in which the first mass becomes stationary and the second mass carries on with the same speed as the original, and another in which the second mass remains stationary and the first mass moves through it uninterrupted, which we discard on physical grounds. This is not spontaneous symmetry breaking. Your equations could be an instance of spontaneous symmetry breaking, for example if the solutions of $\mathbf{x}$ describe degenerate configurations in the free energy of some system - but we would have to know what they refer to.

Well, in his book "Symmetries in Science" (see attached picture), B. Gruber describes SSB without mentioning the ground state at all. His words describe exactly what I found in my system, so I conclude this is indeed a SSB, even if I don't have an energy function. 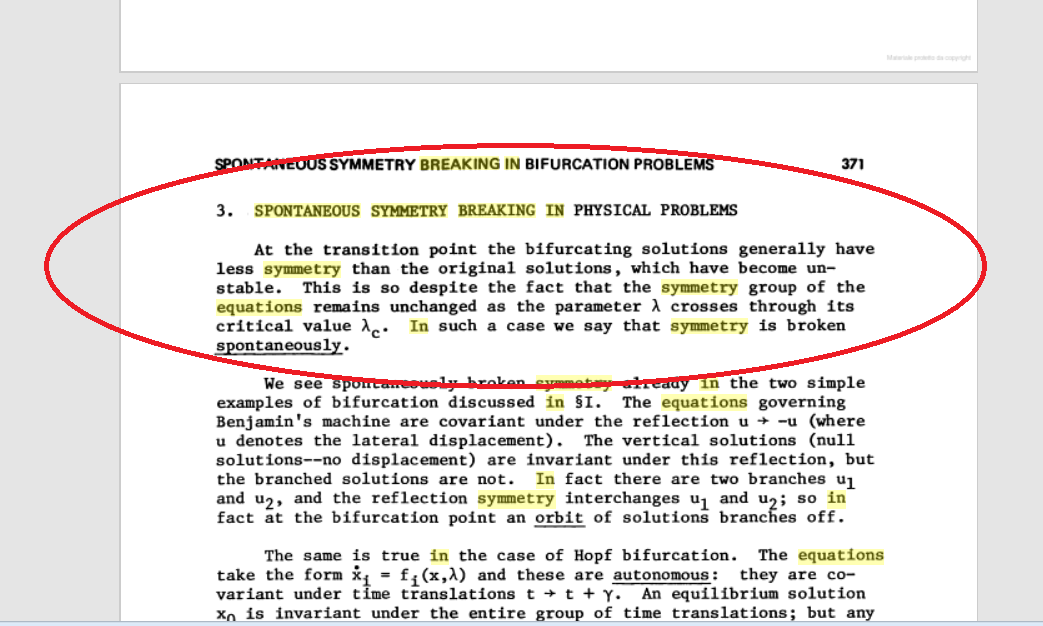 It is maybe a slightly more general definition of SSB compared to that of Hamiltonian systems.

Not the answer you're looking for? Browse other questions tagged symmetry-breaking bifurcation or ask your own question.

5
Spontaneous symmetry breaking to subspace not giving massless bosons
4
Why should Ward identities only be used with the effective action (as opposed to the generating functional for connected diagrams)?
3
Axion strings and spontaneously broken symmetry
4
Why do we need $SU(2)\times U(1)$ invariant mass terms if the symmetry will be broken anyway?
6
How to calculate an axial anomaly in 1+1 dimensions?
4
Why does the covariant derivative not affect the vacuum expectation value of the Higgs field?
2
Peskin's treatment of Pions as Goldstone Bosons