How hot would tritium water be?

I realize this is kind of a silly question, but if you have tritium water, with the tritium half life of 12.5 years, I expect it would be quite hot. (note, this is not a homework question, I'm just curious). 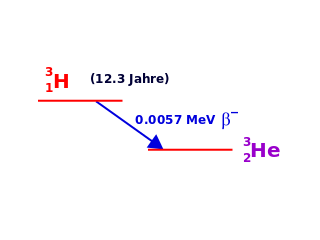 So, here's my question. Am I missing anything or is my math roughly right. If my math is right, if we assume room temperature to be 20 degrees, it would take a little over 1 hour for T-water to warm from room temperature to boiling temp, but assuming it's not insulated, just in a closed, sealed room, the heat would leave it fast enough that it wouldn't reach boiling temp.

Your math is close but not quite right.

First - the number of tritium atoms.

The energy given off in one decay is 19 keV (source: LBL) - but the mean energy imparted to the electron is less: only 5.7 keV (Wikipedia. The remainder goes to the anti-neutrino that is also produced in the decay. Since the interaction cross section between the neutrino and the water is extremely small, that energy can be considered "lost" in terms of heating the water.

This means the total energy deposited in the water (all of it, since the beta decay has a very short range) is about 90 W

Clearly this is a significant source of heating - about 22 calories per second, so it will heat a liter of water by one degree C in about 50 seconds. In an insulated container, liquid that started at room temperature would boil in about a little over an hour. During that time, it would produce about 14 ml of $^3He$ gas as well (0.6 mmol).

This liquid would probably not glow - the blue glow usually associated with radioactivity is due to Cerenkov radiation (roughly the optical equivalent of a sonic boom) and that requires particles to travel faster than the speed of light in the medium.

An electron with 19 keV is not really relativistic (rest mass 511 keV), so the speed is given near enough by

This is sufficiently below the Cerenkov limit (which for water with a refractive index of about 1.3 would be about $2\cdot 10^8 \mathrm{m/s}$ - so there will be no blue glow.

But just because it doesn't glow does not mean it's not dangerous.

According to the CDC, a skin dose of 550 Gy would require amputation. Now with half the water near the skin radiating "away" from the skin, we expect the deposited dose per unit mass in the skin to be half of that deposited in the water; this means the dose rate is 45 Gy per second. You would reach the "amputate everything" dose in about 12 seconds. But because the beta has such low energy, it is said to be absorbed in the "dead upper layer of the skin". This might protect you... If it weren't for the fact that if you have tritiated liquid, you have tritiated vapor. Inhalation of that vapor will be really bad for you.

How bad? Assuming that the swimming pool is a comfortable 22 °C, the saturated vapor pressure of water at that temperature is about 20 Torr or 260 Pa. At 60 % relative humidity (not uncommon near a pool) that would be 150 Pa, or about 1/600th of the air. Assuming that all that inhaled tritium is exchanged with the water in the body, and that an average human exchanges 1 m3 of air with the environment per hour (source), this means 1.6 liter of tritium gas per hour - about 70 mmol. This would deposit 0.07 Gy per hour into the body - where there is nothing to protect you. It would take a bit longer to kill you... but kill you it would. Of course swallowing a bit of pool water would really speed up the process, as would any cuts or abrasions. And did you ever notice how crinkly your skin gets when you spend too much time in the water? That's water penetrating the skin. I don't have a good way to estimate that - the internet is full of stories on the subject, but I found no hard data. I suspect that it will be a significant source of tritium entering the body if you swim in your pool.

So even a very short exposure is likely to be most unpleasant. I recommend against using this as a method to heat your swimming pool.

As an aside, there are plenty of instances where Tritium is used as a good "permanent" light source for watch hands, sighting compasses, and other instruments. The short range of the beta particles and the practical half life make it quite good in this role; mixed with an efficient scintillator that turns the energy into visible light, you don't need a lot of tritium to light up a dial at night. You are allowed to use 25 mCi of tritium for this application without needing an NRC license.

Now 25 mCi is 925 MBq - million decays per second. Your liter of tritiated water exceeds this by about 9 billion; and it is in direct contact with the skin (instead of isolated between a few mm of glass which effectively stops the beta radiation).

This is why tritium watches are safe, and your swimming pool is not.

Not the answer you're looking for? Browse other questions tagged homework-and-exercises thermodynamics energy radiation estimation or ask your own question.

2
Can nuclear transmutation be observed in real time?

0
If human energy use were to increase by 2.3% per year, would we use all solar energy by 1400 years?
3
Can you extract energy from "hot" things without a temperature differential?
1
How big would a Dyson swarm have to be to supply the whole earth's human population with power?
0
Calculating the rate of pressure increase in a water-filled boiler
0
How to Clearly Define Sample Size in Half-Life Measurements?
0
Should the thermos flask better be half full or half empty?
0
Enthalpy of vaporization of water and specific heat of water differences