How does gravity work underground?

Would the effect of gravity on me change if I were to dig a very deep hole and stand in it? If so, how would it change? Am I more likely to be pulled downwards, or pulled towards the edges of the hole? If there would be no change, why not?

The other answers provide a first-order approximation, assuming uniform density (though Adam Zalcman's does allude to deviations from linearity). (Summary: All the mass farther away from the center cancels out, and gravity decreases linearly with depth from 1 g at the surface to zero at the center.)

But in fact, the Earth's core is substantially more dense than the outer layers (mantle and crust), and gravity actually increases a bit as you descend, reaching a maximum at the boundary between the outer core and the lower mantle. Within the core, it rapidly drops to zero as you approach the center, where the planet's entire mass is exerting a gravitational pull from all directions.

The Wikipedia article on "gravity of Earth" goes into the details, including this graph: 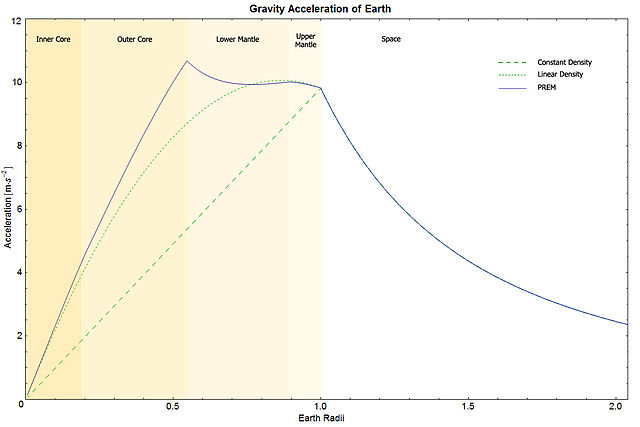 "PREM" in the figure refers to the Preliminary Reference Earth Model.

Larger versions of the graph can be seen here

And there are other, smaller, effects as well. The Earth's rotation results in a smaller effective gravity near the equator, the equatorial bulge that results from that rotation also has a small effect, and mass concentrations have local effects.

Setting Mr to denote the portion of Earth's mass enclosed within Sr, we can rewrite the last formula as

Now, letting ρr denote the average density of the portion of the Earth enclosed within Sr, we have

The conclusion is that the gravity inside Earth depends roughly linearly on the distance from the center of the planet and density variations account for the deviations from linearity.

An interesting way to visualize this is to think of an over 12,700 kms long elevator from Hamilton, New Zealand to Cordoba, Spain. During the travel (which at average speed of 200km/h would take almost three days) passengers would feel gradual and roughly linear decrease in weight and in the middle of the journey would experience weightlessness followed by gradual increase in weight as they near the surface on the other side. Also, around the midpoint of the journey the floor and the ceiling would swap.

Acceleration due to gravity at depth d below the earth's surface is given by: 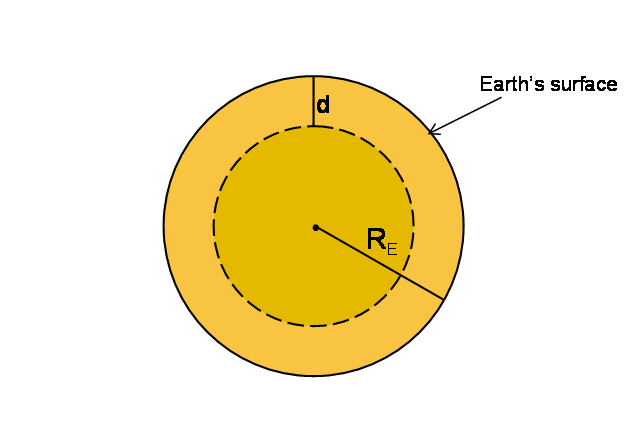 This is a really interesting problem which have had a first solution from ancient greeks (I heard Carlo Rovelli to recount this). Indeed, when you dig a hole in the Earth, gravity starts to become proportional to distance and, if you will dig in the way to open up a hole to the other side of the Earth, a mass will oscillate in the well you created.

Not the answer you're looking for? Browse other questions tagged newtonian-gravity planets earth faq or ask your own question.

3
Infinity problem: Why is gravity $g=0$ zero at the center of Earth if according to Newton gravity formula $g=GM/R^2$?
2
Why does gravity decrease as we go down into the Earth?
5
Gravitational force of the Earth
0
What is acceleration due to gravity at the centre of the earth?
2
Gravity beneath sea level
3
Why is the gravitational potential inside a hollow sphere same as that of the gravitational potential on the surface of the hollow sphere?
0
Why is there no gravity in the center of a celestial body, yet there is gravity on the surface?
0
$g=GM/r^2$; $M=$mass of Earth. So in center $r=0$, so $g$ should be infinity
0
Why is the value of $g$ 0 in Earth's center?
1
Why gravity decreases as we go under ground?
See more linked questions

22
Gravity on a doughnut-shaped/Möbius planet
2
Does the gravitational force of a massive, spherical body draw only towards its center of gravity, and to no other area?
0
Using normal rules of gravity, How would gravity work on a flat "world"?
2
How deep does a gravity well need to be to remove particles from a planetary body?
2
If a material less denser than the earth’s core were at the center of Earth would it move towards Earth's surface?
0
If gravity were increased, how would it change the spring constant for a given spring?