I could give to you only an answer to some part of your question. The comment from gonenc points to an answer, there the first sentence is:

If you are not well-acquainted with special relativity, there is no way to truly explain this phenomenon.

There is a simple explanation how accelerated electrons create a magnetic field. It has to do with the intrinsic spin and the related magnetic dipole moment of the electrons. If you are not familiar with these phenomena of electrons please read Wikipedia, search in StackExchange or ask in separate questions.

Now, if you are familiar with the basics please read my explanations about how works the phenomenon of electromagnetic induction.

This is only the first step to answer your question. Now you could imagine how a accelerated charge - for example an electron in a coil - induces a magnetic field. How the magnetic field in a straight wire get induced I have explained in other posts.

But my posts were greeted with scepticism. I've no problem with that. What disturbs me is the general reaction that they are "wrong". My question is summarised as follows: Did any of these people actually follow my explanations and can anyone tell me where a mistake was made? (This sentences are adopted from a question of @G. 't Hooft.)

How are electrons responsible for magnetic field around a wire?

Via the "screw" nature of electromagnetism. Minkowski referred to this in Space and Time, as did Maxwell in On Physical Lines of Force: "a motion of translation along an axis cannot produce a rotation about that axis unless it meets with some special mechanism, like that of a screw". This why we have the right-hand rule which applies not just to electromagnetism, but to screw threads. Note section 11.10 of Jackson's Classical Electrodynamics where he says "one should properly speak of the electromagnetic field Fμν rather than E or B separately". Like Christoph said in the possible duplicate, the electron doesn't actually have an electric field, it has an electromagnetic field. And to envisage this field you take a tip from Maxwell's combination of curl and convergence:

The above is a flat depiction with no spin ½ dipole, but I think it's enough to get across this screw nature of the electromagnetism. It's also reminiscent of depictions of a vector field and a spinor, and something like the gravitomagnetic field, which is described as twisted space by NASA author Tony Phillips. The electromagnetic field isn't totally different, see Heaviside's 1893 paper. IMHO you get the gist of it by imagining you're walking into it with your arms outstretched: think of the electromagnetic field as a "twist" field, wherein if you were moving through it but didn't know it, you might say it was a "turn" field. That's kind of what a magnetic field is. We talk of curl aka rot which is short for rotor, and if you throw an electron through a magnetic field, it goes round in circles. 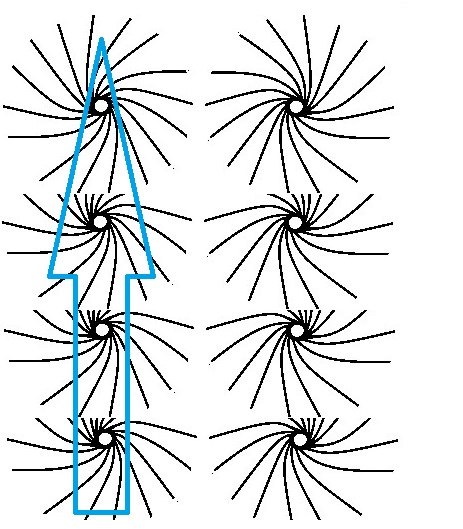 So it's like you're moving through one set of twist fields but not the other. And when you have motion relative to a twist field, you think of it as a turn field, and that's what a magnetic field is. So what you "see" is a magnetic field around the wire. 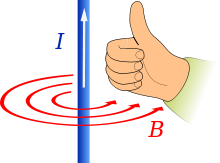 $*$ Actually they don't quite cancel each other out, but that's one for another day.

156
How do moving charges produce magnetic fields?
130
Why do people categorically dismiss some simple quantum models?
14
Bar magnet dropped through coil
13
How does the emf “know” what the magnetic flux is?
4
Is there any other momentum besides the Poynting momentum stored in an electromagnetic field?
2
Electric field energy of two parallel moving charges at relativity speeds