Intuitive understanding of the elements in the stress-energy tensor

There is an image in the Wikipedia about the stress-energy tensor: 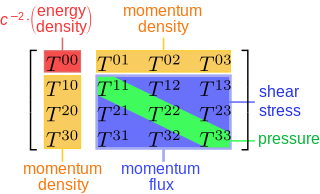 Now the first question: Why is the lower half of the spatial part is the momentum flux, while only the upper one is the shear stress on the image? Is the image wrong? Isn't the spatial part describe the classical stress tensor?

The second question is: what's the intuition behind the temporal part?

Also stresses are measured in Pascals, mass density is measured in $kg/m^3$ while momentum density is in the units of $Ns/m^3$. These units doesn't seem to be compatible, but still they are in the same matrix, why?

EDIT: It has been pointed out that momentum flux refer to the entire blue part, it indeed have a lighter frame I didn't notice. Then yet another subquestion: what's the difference between the momentum density and momentum flux?

at the position of the particle and zero everywhere else. The variable $v$ is the velocity vector $(c, \frac{dx}{dt}, \frac{dy}{dt}, \frac{dz}{dt})$ i.e. it is the derivative of the position with respect to coordinate time (not proper time).

Expressed this way it's obvious that all the entries in the stress-energy tensor have the same dimensions of $ML^2T^{-2}$ (divide by $L^3$ to turn it into a density). So the only remaining question is how the ensemble properties like momentum density and pressure emerge from the point particle description.

The $T^{00}$ element is easy since that's just $\gamma mc^2$, which is the energy. So add up all the point particles and you get the total energy.

The diagonal elements (other than $T^{00}$) look like a kinetic energy $\gamma m(v^i)^2$. If you consider an ensemble of particles with random velocities (e.g. thermal velocities) then the kinetic energy is simply related to the pressure, and that's why the diagonal terms are effectively a pressure.

TL;DR: It may be helpful to think of the above-diagonal orange components as "energy flux" rather than "momentum density"; if you do this, the interpretations in terms of shears and pressures become more natural.

Here's another way to think of the stress-energy tensor. First, you're hopefully familiar with the notion of the energy-momentum four-vector: $p^\mu = (E/c, p_x, p_y, p_z)$. Each one of the components of this quantity is conserved.

Second, you have hopefully come across some form of the continuity equation. This is a statement about conservation of some quantity that can flow through space. If this quantity has a density $\rho$ and a flux density $\vec{J}$, then we have $$ \frac{\partial \rho}{\partial t} + \vec{\nabla} \cdot \vec{J} = 0. $$ What this says, effectively, is that if the quantity [foo] is flowing out of a region of space (i.e., $\vec{\nabla} \cdot \vec{J} \neq 0$ at a particular point), then the density of [foo] must be changing at that point (and with the opposite sign). This is, for example, how charge conservation is enforced in classical electrodynamics; if we integrate the equation over some region and use the divergence theorem, we get $$ \frac{dQ_\text{enc}}{dt} + \oint \vec{J} \cdot d\vec{a} = 0, $$ i.e., if there's a net current flux through the surface, then the charge enclosed is changing.

If we look at the $T^{1 \mu}$ components of the stress-energy tensor, though, we have precisely these quantities! $T^{10}$ is the momentum density; and $T^{11}$, $T^{12}$, and $T^{13}$ are the fluxes of $x$-momentum in the $x$-, $y$-, and $z-$direction respectively. To see why this is, note that if $x$-momentum is fluxing in the $x$-direction across a surface, this means that the objects on the other side of the surface are experiencing a force in the $x$-direction (since $\vec{F} = d \vec{p}/dt$); and since momentum flux is just momentum per time per area, $T^{11}$ is just a pressure in the $x$-direction. By the same logic, if $x$-momentum is fluxing in the $y$-direction across a surface, this would correspond to a shear stress (a force is being exerted parallel to the surface rather than perpendicular to it.)

So that explains why the green components are pressures, the dark blue are shears, and the components $T^{10}$, $T^{20}$, and $T^{30}$ are momentum densities. But what about energy conservation? Well, if we try to do the same here, we can identify $T^{00}$ as the energy density; but under this interpretation $T^{01}$, $T^{02}$, and $T^{03}$ are more naturally thought of as energy flux rather than momentum density. It is apparently just a fact about the universe that these two quantities are equal to each other; at the very least, given the symmetries we know about between space, time, energy, and momentum, it should seem plausible that this is true.

if c=1 it all works. Else you think in 3D. c is the speed of time in terms of space. Wouldn't we make that 1, if we want to scale 4 dimensions? Our axis can be labeled anything, but why not scale them 1,1. To do that set c=1. if you want a trickier graph , set c=2, but there's no point in that, because c is the slope of the axis, so let c=1. Better yet set c=Sqrt(-1), since the metric tensor subtracts c^2 in the measurement of squared movement. 1,1,1,-c^2 is the trace. Square root to solve for the SE tensor, then either make t the imaginary by setting c=1, or make it real by setting c=i. These equations say it's imaginary, which it is, since it is a timelike dimension. let me know when t'=i, maybe at Sqrt(2)c, then you might have changed everything, since t is now likely space like. Would you then experience the extension of the euclidean space where time is a distance? IDK. The metric result would become negative, thus imaginary hyper-distance is being accounted for. Where would you move then? The sum of the integral of hyper-distance squared, would be rewinding? If that pythagorean theorem holds for every path, would time travel work? IDK. Let c=1 and these things will be much easier.