Pascal's principle in hydraulics leads to force amplification which is a common feature in hydraulic brakes and hydraulic press. A small force applied on a piston of small cross sectional area produces a larger force on another piston of larger cross sectional area when they are connected by an incompressible fluid. How does one explain the validity of Newton's Third Law in this example?

Lets consider a situation which is in equilibrium, which consists of two pistons with different surface area which are connected to each other by an incompressible fluid. I will also assume that gravity does not play role, so no increase in pressure inside the fluid do to gravity. In this case the situation can be represented with the following drawing: 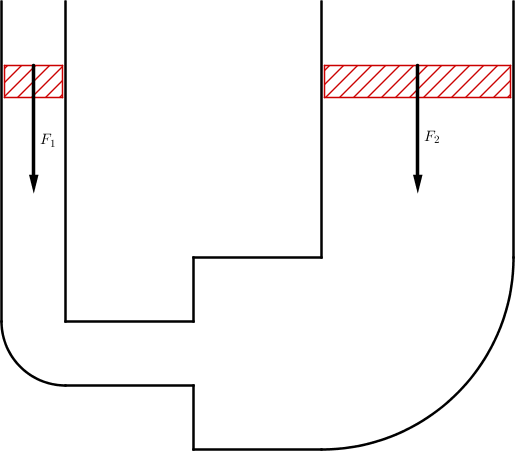 Here the fluid is under constant pressure, $p$, and the tubing is connected to the ground. Thus the walls of the tubing, which house the fluid, also exert a force on the fluid. In the example the bends make it a little bit more complicated, but if you would straighten out all bends, then most forces exerted by the walls would cancel each other due to symmetry. The only force contribution from the walls, which are not cancelled due to symmetry, arise from the change in cross section area. In this situation the change in cross section area generates a force to the right. In the situation, in which all bends are straighten out, the resulting force, exerted by the walls of the tubing onto the fluid, will be transferred from the connection of the ground to the tubing. In case it should become clear that in the situation in which the force $F_1$ and $F_2$ cause the system to be in equilibrium that the sum of all forces add up to zero.

It can be noted that the work done by the walls of the tubing will always be zero (assuming that they do not expand and contract due to change in pressure). When neglecting friction and shear forces, then the work done by $F_1$ and $F_2$ will always add up to zero. This is similar to a gear box, which increases torque but decreases angular velocity, or a pulley system.

Newton's Third law: When one body exerts a force on a second body, the second body simultaneously exerts a force equal in magnitude and opposite in direction on the first body. As the pressure inside the system remains the same on all surfaces, the large piston does indeed exert an equal pressure on the small piston PER UNIT OF SURFACE AREA.

Here is a graphic explanation: http://hyperphysics.phy-astr.gsu.edu/hbase/pasc.html. Scroll down to the second box.

8
Why Pascal's Law is true and what is the mechanism for force amplification at molecular level?