Why isn't the color of a molecule a combination of the colors of its component atoms?

I was watching a documentary on youtube regarding Quantum Physics when it introduced the wavelengths of light emitted. Did a bit more research over the internet and I believe I understand the gist of why each atom gives off different colors. Here's a brief summary of what I've read:

An atom of a particular element has several shells of electrons, and each shell is a different energy. When the atoms are heated up, some of the electrons can jump up to shells with higher energy, but they don't stay there very long. When the electrons fall down again to a lower energy shell, they give off that energy as a photon (a "particle" of light). The amount of energy of the photon given off is the difference in energy between the two shells, and determines the wavelength of the light.

With all that taken into consideration, why is it that a molecule isn't a combination of its component atoms? More precisely, how is the color of a molecule determined?

visible-light atoms molecules
share|cite|improve this question
asked May 12 '15 at 2:28

That's also the answer to your question. In the same way, when you combine two hydrogen atoms and an oxygen atom to make water, there isn't a "hydrogen electron" in the same way as in a bare hydrogen atom, or even a hydrogen molecule. A "hydrogen electron" in a water molecule is interacting with both hydrogen nuclei, and the oxygen nucleus, and the other nine electrons in the system, which makes its excitation spectrum fundamentally different from the spectrum of an electron interacting with a free proton.

Molecules aren't just sums over their constituent atoms. There's many different kinds of bonds which involve different patterns in the overlap of electron orbitals, and which affect the energy levels those electrons can occupy - I'm assuming the QP video you watched explained how "color" relates to electron energy levels.

The (hydrogen-like-)atom case is just the simplest possible scenario - it's actually possible to calculate exactly. Ions/atoms with more than one electron are a bit trickier, so we can only really approximate those. The electrons in the orbitals interact not just with the nucleus (which can be approximated to be a point-charge for our scenario), but also with each other - and that's the tricky part. Now when you bond two atoms together to form a molecule, you've added another bunch of electrons to worry about; they will "deform" each other's orbitals, even those that aren't involved in the bonding directly (albeit only slightly). 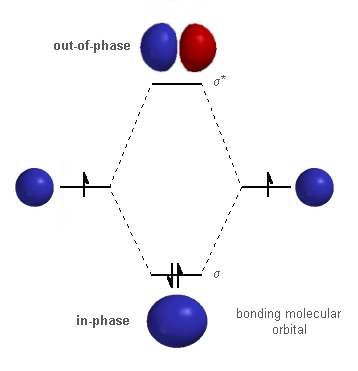 While the constituent hydrogen atoms on their own would usually have simple 1s orbitals, which are "spherical", you can see that the electrons in the molecule are in orbitals that are "squashed". This of course means that the energy levels these electrons can occupy have changed, and thus also the way they interact with incident photons. And this is just a simple molecule, made of two atoms of hydrogen. It doesn't really get any easier than this. Now imagine something a bit more complex, like the rhodopshins that give us monochromatic vision - those are proteins composed of thousands of individual atoms. While only a tiny part of this protein actually participates in absorbing the incident light, this only really highlights how complicated this really is for real-world purposes.

So, why do we even care about the spectra of atoms, when we don't really find all too many "free" atoms in nature? Apart from simply understanding the physics involved, the big reason for astronomy is plasma. The surface of a star is formed out of individual ions, not molecules. So we can actually see what the star is made of by observing its spectrum. And of course, you're not limited to only using atomic spectra - you can notice that when determining e.g. the composition of Jupiter's atmosphere, we're actually looking for the "signature" of stuff like methane, or carbon dioxide - each leaves its distinct mark. The same way, we can tell the difference between hydrogen atoms and hydrogen molecules. The same way, ozone has a different absorption spectrum from simple di-oxygen molecule, which is why ozone shields us from ultra-violet light while di-oxygen doesn't.

The answer is that color is determined by electron transitions between different energy states. Those levels are different in molecules than they are in the component atoms where there is only a central force in atoms, whereas the multiple positive charges in molecules creates a more complex potential field for the electrons to move around within.

Molecules form because there is a reduction in electronic energy that is allowed by the adjacency of their positive nuclei. Essentially the outer electrons in a molecule are shared by adjacent nuclei and this sharing means they can have lower total energy. (Tightly bound electrons have higher energies.) The larger "range of motion" also allows these electrons to have lower energy transitions. The inner electrons are typically not contributing very much to color, which is really the capacity to absorb photons in the visible range, whereas the outer electrons become shared or de-localized among the nuclei. Most of the molecules we think of as "colored" actually are bigger molecules where the electron transitions are actually occurring over the length of multiple nuclei. Think of carotene (the compound that give carrots their color) where multiple adjacent double bonds alternating with single bonds provide a long "runway" for electrons to "slide" back and forth.

The "colors" of molecules are not really determined by interactions with nuclei, anyway, but rather with an electron "cloud" around multiple nuclei. Electrons are "shared" among nuclei which is the source of the bonding energies. The reason the shell model of electron transitions is inadequate is that the potential "movement" of electrons becomes de-localized around the various nuclei in a covalently bonded molecule. It's one of those concepts that makes organic chemistry so ... what's the right term ...vibrant?.

It's possibly useful to think of electrons in molecules as "springy" in 3 dimensions and their resonant frequencies being determined by the boundaries of their electron "orbitals". The Wikipedia page on molecular orbitals has a lot of useful background and illustrations. Organic compounds with several double bonds close to each other are often colored in the visible range of the spectrum. Do further searching on "carotenoids" which are the colored chemicals in leaves that give them the reds, yellows and orange colors of Autumn. Similarly the more famous photosynthetic molecule chlorophyll has a fairly broad resonance that is coupled to an exquisite chemical cascade to harvest visible photon energy.

Not the answer you're looking for? Browse other questions tagged visible-light atoms molecules or ask your own question.

1
Why is gaseous carbon dioxide transparent?

11
Do we really not know why atoms 'decide' to produce a photon?
0
How can silicon have a capacity of 8 electrons in the outer shell?
1
Splitting molecule
0
Basic question about light
3
What causes molecules to vibrate when exposed to electromagnetic radiation
9
How does an electron absorb or emit light?
1
A question on the emission spectrum and absorption spectrum
4
Would an $H_2O$ Molecule actually look like this 3D representation if we could see it?
5
Why are atoms not destroyed when dropped?
0
Are individual atoms inside a molecule (covalent) still really EM neutral?