Is there a definite boundary between a powder and a fluid?

Given a powder of solid substance what will happen if we make the granules smaller and smaller mechanically? Will this eventually make a liquid or gas from the powder?

Can there be gaseous substanse made not from single molecules but from microscopic granules of a solid?

Also, I wonder whether making a power finer will decrease its angle of repose to zero.

As a close approximation of finely ground powder we can consider fullerene $C_{60}$ molecule which has a size of about $1\,nm$. There are no chemical bonds between molecules but van der Waals force holds them together and fullerene powder looks like any other fine powder: 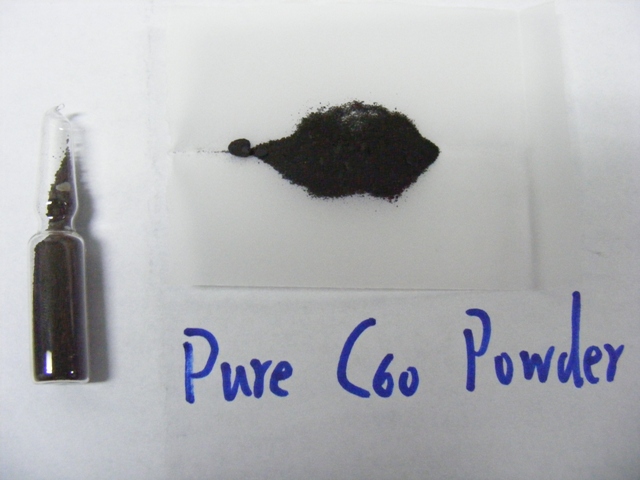 Edit: I have to clarify my argument. When fullerene is produced in plasma it exists as separate molecules. But when collected in bulk amounts, these molecules stick to each other resulting in a regular-looking powder. My point is - no matter how fine a material is milled, the result would still be an ordinary powder because small grains stick together.

If what you described were possible, then you could mechanically turn ice into water at subzero ambient temperatures, or generate room temperature liquid iron. For something to be a liquid, the molecules have to have enough kinetic energy to keep from sticking rigidly together.

As for a gas, the same thing applies. The molecules have to have even more kinetic energy to detach themselves completely. If you tried to have a gas made up of small clumps of molecules, you would be in an unstable situation. If it's hot enough so they don't clump into bigger and bigger clumps and eventually solidify, then they will smash each other into molecules. Teeny clumps have the most surface area compared to their total volume, so on a percentage basis they lose volume the most quickly. Once you get down to individual molecules, they don't smash each other apart unless it's much hotter because covalent bonds are so much stronger.

The reason why steady packings of powders exist is precisely because

For usual granular matter, the static properties such as achievable packing fractions and angle of repose are very much dependent on the protocol, the grain properties, its friction coefficient, its shape, the polydispersity etc...

It depends so much on the protocol and details of the experiment that it has been reported that it also depends on temperature variations. In fact since we have to deal with macroscopic grains, they can expand or contract because of temperature changes. In most packings with little friction, this can generate a loss of angle of repose momentarily until a new mechanical equilibrium is found.

Finally, I have to specify that in the case of the settlement of a powder on a substrate in absence of containing walls (context in which we can talk about angle of repose), if there is not enough friction between the grains and the substrate (if its surface is very very smooth or lubricated somehow), then the concept of angle of repose disappears and the powder literally "wets" the substrate as Aulo reported. Of course, contrary to the usual wetting of a molecular fluid, the cause here is more gravity than the van der Waals interaction between the grains and the substrate (although the latter does play some role too).

Now, for the simplest dynamical aspects, if one vibrates a powder very fast, it is possible to obtain a granular fluid regime that looks like a liquid or gas depending on the density. Despite all the efforts of the community on this topic it seems that for the specific reasons aforementioned it is impossible to get a one to one mapping between an actual fluid and a granular fluid although it is possible to rewrite most properties in a similar language. During avalanches, parts of the grains literally flow down a slope like a liquid but the velocity distribution is not Maxwellian for instance. Sand timers work on the same principle as water clocks (flowing down through a hole) but are more convenient than the latter because the flux of grains through the hole is independent of the height of the packing $h$ (contrary to most molecular fluids with a dependence on the $\sim \sqrt{h}$).

Finally, as it has been pointed out, granular flows can jam which is not the case for any molecular fluid that I know of (although this is a very controversial topic, the jamming transition has been shown to be quite distinct from the glass transition).

Now, your question is originally about downsizing the grains. That is possible up to few hundred microns at most. Below that scale, we reach the micron scale, and particles of that size are usually called colloids which refers to those particles that are neither molecules nor grains but in between. For that reason, they behave as real life toy model "molecules" once they are put in a solvent. This size dependent thermal regimes are discussed at the beginning of this paper although I have failed to retrieve the specific paper I have in mind on the subject.

In air, I am not really sure about how they behave, but most likely if you sweep some air, they will gain some altitude, attract one another via dispersion forces and can aggregate by doing so over long periods of time (that's how dust forms).

The two properties I have told about at the beginning (characteristic of powders) do not really hold anymore and the science of colloids consists then in trying to figure out how to pattern and treat these micron or sub-micron particles to make them interact in a way we like.

These colloidal systems have very rich phase behaviour including of course liquid-gas transition and fluid-solid transition among many other.

A powder is a state with microscopic grains, a fluid has sub-nanoscopic grains. A powder is a granular material, it therefore presents a jamming transition, where the size of grains induces non-linear flowing of the material.

This jamming transition can be seen as an effect of the rather small number of particles in such experiments. When considering a similar number of sand grains to the number of water molecules in a glass of water (about $N_{part}\simeq10^{23}$ molecules in a volume of $1cm^3$), the volume of sand would be roughly $1/1000$th of the Sahara.

This size is 4 order of magnitude below the size of a sand grain. This would indeed require quite a lot of energy (like reducing a mountain like the Everest into blocks of 1 meter in size)...

Finally regarding the existence of a gas of such fine particles, I would refer to the monitoring by NASA of sand going from the Sahara to the Amazon. The distinction between a gas and a liquid there is only a matter of density.

EDIT : Hasty conclusion about the angle of repose.

Why is solid not big gas particles. Where is the boundary between metals and non metals. Their properties? Their form? When does one change into the other. When does something stop and start being an antenna?

Not the answer you're looking for? Browse other questions tagged fluid-dynamics phase-transition granulated-materials or ask your own question.