Why do we feel resistance to gravity rather than the acceleration of gravity?

From a Newtonian perspective, the difference between being accelerated by gravity in freefall (which includes orbits) and being accelerated in a car has to do with the fact that you only "feel" accelerations when the external force is only being applied to one part of your body, rather than accelerating every particle equally as with gravity. For example, if you're sitting in a car the only external force is on the part of your body that's in contact with the seat, so if the rest of your body accelerates too, it must be because of internal compression forces within your body.

So basically, the same thing happens with your body--when the seat accelerates your back side, your body tissue compresses a bit until the spring-like force is accelerating your front side at the same rate as your front side, and this compression is what you feel physically as acceleration. In contrast, with gravity all parts of your body are being accelerated equally so there is no compression, and you don't feel anything. Note that the reason gravity is different here just has to do with the fact that we don't normally encounter other external forces which act uniformly on all parts of our bodies, but this would certainly be theoretically possible--for example, if your body had a net negative electromagnetic charge, and the extra negative charge was distributed uniformly throughout your body, then if you were being accelerated by electromagnetic attraction to a body with a net positive charge, you wouldn't feel this either (at least not unless you were close enough to the positively-charged body so that the electromagnetic attraction of the nearer part of your body was noticeably stronger than the attraction of the farther part, which would be the equivalent of a tidal force in gravity).

If you analyze things using general relativity (Einstein's theory of gravity) rather than Newtonian gravity, in this case gravity is not treated as a "force" at all, but rather an effect of the fact that matter and energy create curvature in spacetime, and objects in freefall (those with no net non-gravitational forces acting on them) naturally follow geodesics in the curved spacetime. In Newtonian physics, you can (and usually do) analyze problems in a global coordinate system known as an inertial frame, and objects in freefall in a gravitational field are treated as moving non-inertially (not a constant velocity relative to inertial frames). In contrast, in general relativity you can only have "local inertial frames" in infinitesimally small regions of curved spacetime, and in such frames objects in freefall are the only ones moving inertially, whereas something like an object sitting on the surface of a planet is moving non-inertially (being accelerated by the normal force from the ground, as measured in the local inertial frames of freefalling observers). See this article on the equivalence principle for more on these ideas.

The answer from a Newtonian perspective:

TL;DR: Objects do feel gravitation, but only if they're very big, or if the gravitational field is very strong.

Suppose you are in a spacesuit and are orbiting the Earth. Your feet are pointed toward the Earth, your head into space. Because gravitation is a 1/r2 force, the force on your feet is slightly stronger than the force on your head. Gravitation is trying to tear apart! This is a very small force for someone a couple of meters tall. You can't feel it. Now imagine straightening out your arms so they are perpendicular to your body. The force on your fingertips is downward but also a bit toward your body. Gravitation is trying to squeeze you from side-to-side. Here's a diagram of these forces on a spherical object: 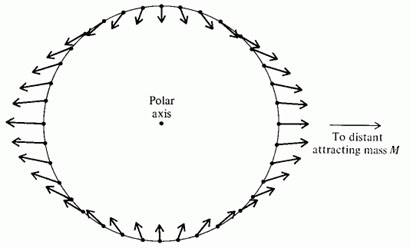 The tidal forces exerted by the Moon and Sun across the Earth are rather small. They are immeasurably small for an object the size of a person.

The answer from a relativistic perspective:

We don't feel the fictitious centrifugal force or the fictitious coriolis effect. Unlike the very real force you feel when your buddy offers to give you a ride in his new Corvette, those fictitious forces aren't "real" (hence the name). The answer to this question from a relativistic perspective is very simple: Gravitation is a fictitious force in general relativity. You can't feel it because it's not "real". For more, read up on the equivalence principle. There are a number of questions at this site that are tagged with the equivalence-principle tag. Look at those questions and the answers to them.

Not the answer you're looking for? Browse other questions tagged gravity forces reference-frames equivalence-principle inertia or ask your own question.

2
Will we feel right up inside the airplane if the airplane accelerates toward earth at 20m/s^2?
3
Can we think of gravity as space itself moving?
4
Is inertia actually a property of the force rather than the mass?
22
Why does rotation simulate gravity if motion is relative?
1
How does acceleration feel compared to gravitational pull?
0
Question on equivalence of acceleration and mass with respect to gravity
2
Can we feel gravity while free falling?
1
G-force: difference between gravity and acceleration of an object