Increasing collision energy in hadron collders doesn't always improve the abiilty to hunt down the Higgs. I know that if the Higgs mass is just above LEP exclusion, then even 7 TeV is too high to be optimum. However, I don't know the situation for a ~125 GeV Higgs.

Third of all, see

to notice that it doesn't hurt if you raise the energy. The required number of collisions drops approximately inversely proportionally – to one-half – if the energy is raised. Compare the 7 TeV and 8 TeV lines in the graph above to see that this is the rough rule, regardless of the Higgs mass. A higher energy and the same integrated luminosity means a higher potential for discoveries and exclusions, a higher expected confidence level.

LEP made clear collisions where electrons and positrons could merge to pure energy – a virtual neutral particle including the Higgs – and cleanly decay. Even quarks and antiquarks in the proton-antiproton collisions at the Tevatron could do it, although there were many other quarks and gluons from the protons and antiprotons around.

However, the LHC may only make virtual Higgses by annihilating quarks with antiquarks, but antiquarks are "minority partons" in both protons. So new particles, including the Higgs, often come from gluon fusion - gluons inside the protons annihilate – and these processes are messier, less likely, and have relatively larger background. Moreover, gluons with higher energies are more frequent inside the protons than gluons with lower energies (parton distribution functions for gluons increases with energy), so the gluons themselves may be too energetic.

But the high energy of the LHC protons themselves is never the real problem.

The dominant production mechanism for the Standard Model Higgs is through gluon fusion, i.e. you have two gluons scattering with each other and producing a Higgs particle. The important backgrounds (collisions which look similar to Higgs bosons but are not concentrated at a particular mass) however are typically produced by quark-anti-quark scattering.

If we have two quarks, antiquarks or gluons in a proton of each beam which carry a fraction $x_1$ or $x_2$ of the proton's energy respectively, we can -- to first order approximation -- produce a particle of mass $m$ where $m$ is given by:

i.e. to produce a particle of a given mass, the average fraction of the momentum carried by the interacting constituents of the proton decreases with increasing collision energy.

The probability to get a quark, antiquark or gluon at a certain momentum fraction $x$ strongly depends on $x$. You can see this in the following graph: 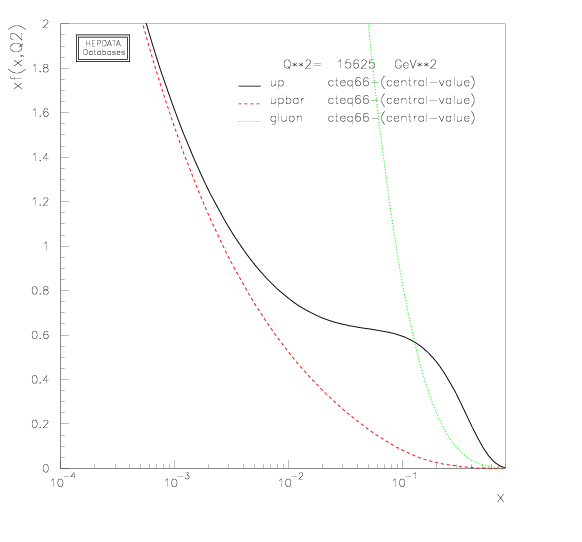 In addition to that, even with point-like particles like electrons and positrons, the cross section (interaction probability) for the production of a particle of a given mass increases with increasing energy of the collision because there are 'more possible velocities' for the produced particle (the 'phase space' is larger).

The Superconducting Super Collider in Texas with a center of mass energy of 40 TeV would have therefore been even better to produce Higgs particles, assuming that the luminosity (beam currents and beam focusing at the interaction points) would be comparable or better than the LHC.

Not the answer you're looking for? Browse other questions tagged large-hadron-collider higgs or ask your own question.

7
How many $fb^{-1}$ for the most likely $5\sigma$ 115 Gev Higgs at the 7 Tev LHC?
5
What's the Standard Model width of a 125 GeV Higgs?
6
Is a 125 GeV Higgs large (or small) for the MSSM?
8
What if the 126 GeV particle found at LHC that LOOKS like the Higgs is actually not the Higgs Boson?
8
Spin of 125 GeV Higgs boson
8
What is the most natural new physics one can expect at the TeV scale: new (supersymmetric)particles or some new (non-commutative) spacetime structure?
7
Why is the energy of particles in accelerators much higher than the energy of the particles they are trying to find?
0
On the mass of the Higgs Boson
2
Branching fractions for the 125 GeV Higgs boson