What would happen if I were to fall into a massive hollow planet?

Imagine, if you will, there exists somewhere out there a supermassive planet. For some reason, this planet is only a shell of its former existence and all that is left is a crust of substantial size to keep it from collapsing in on itself (let's imagine it is stable at 5000' thick). Now, this planet was HUGE! How large, you ask? Large enough that the remaining shell is still able to maintain a gravity well strong enough to keep you anchored to the surface.

Well, since this is a sight to be seen by everyone, you stroll along and, not looking where you are going, you tumble into a chasm and straight down into a hole that permeates the thickness of the shell. As you are falling down and down and down, you think:

"At what point do I stop falling down and I start falling up? And would I be able to retain the velocity, since gravity is a conservative force, and fall back through another hole on the surface on the opposite side? Where would the center of gravity even exist? I mean, aaaaahhhhhhh!"

What say you, browsers and scientists? A stretch of the imagination, sure, but is it physically possible? Could there exists a configuration similar to this where gravity could be concentrated to a point but still allow free travel up to the focus?

newtonian-gravity planets
Share
Improve this question
edited May 7, 2015 at 20:14

Yes, this is possible. It is perfectly fine for a mass configuration to

The spherical-shell model you describe is the simplest example of this. (On the other hand, it does not describe a physically realizable model from a materials standpoint, as described in Rod Vance's answer.)

In addition to this, your spherical shell of a planet will have the additional property that once you are inside the shell, the planet's gravitational attraction will vanish. Objects there will perform uniform linear motion with constant velocity, until of course they reach the edge of the shell.

This has been known since the time of Newton and it is one of the standard exercises in electrostatics (which is mathematically identical to newtonian gravity) for a physics undergrad. Schemes like this are fairly common and relatively fun to analyse; you may find the "gravity train" interesting.

Emilio Pisanty's answer is a great one to this particular answer, i.e. there is no in principle bar from the laws of physics to a structure like yours and it would have the zero gravity inside property that Emilio describes.

But, from a materials perspective, it would be pretty much impossible for a planet like this to form unless very small. The stablest (lowest energy) configuration of a clump of matter is a spherical solid, which is why celestial bodies over a certain size are spherical. Over time hollows would slump in on themselves owing to stress, asteroid impact and the like. Smaller bodies can be nonspherical owing their strength (characterized by quantities such as tensile strength) i.e. the internal forces that they can support before being shorn apart and "flow" like a fluid are nonzero. They will "flow" until all internal forces are compressive: materials tend to be much stronger in compression than tension. But this limit is reached for the kinds of matter that asteroids and planets are made of pretty quickly. Take a look at this table of Solar System moons from NASA and check their dimensions: this will give you a good idea of this limit. Anything with dimensions of several hundred kilometers or more is listed as spherical. A good example is Ceres: a highly spherical asteroid (and the biggest asteroid). Below is a scale comparison of the asteroids Ceres, Vesta and Eros and it gives a good, qualitative feel for the roundness versus size relationship: 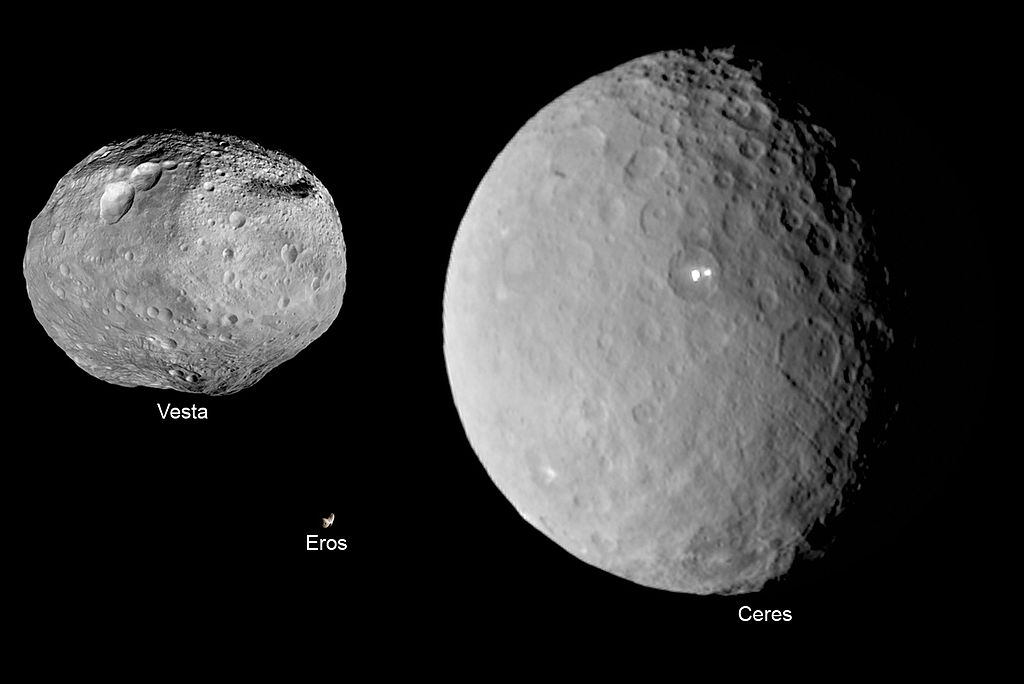 These are solid structures. The maximum spherical size for a hollow structure would be less.

A structure like yours would be a built structure lasting only civilization-lifetime-length timescales: probably much less than one million years.

According to the shell theorem, the gravitational force inside such a hollow spherical planet would be 0

On the outside, gravitational force would be as if the planet was a regular planet. At some point during your fall, the gravitational force pulling you to the center would decrease to 0. If there's atmosphere inside the planet, it would slow you down until you came to a stop eventually. Without an atmosphere to stop you, according to the theorem there's no force to change your movement and you will fall to the other side of the shell.

What if this planet existed and you fell in? Let's take a look at that and see.

I'll spare listing all the reasons why a planet like this can't exist and wouldn't last long if it did; those are no fun. So instead, let's say this planet does, for some reason, exist in some galaxy far far away and it's made of something strong enough that it'll be around for the long haul (So that's where all the adamantium went!). As stated elsewhere, the shell theorem says that the gravity inside this big, metal, hollow sphere should drop to zero. This happens because the distribution of matter on all sides has a net canceling effect on the gravitational force felt by anything inside the shell. But now we're assuming there's absolutely nothing inside the planet shell. Is this really realistic? (that is, is it realistic for our unrealistic plant-shell scenario? Because if it must be unrealistic, it should be at least realistically unrealistic. I think that's a realistic requirement).

So here you are, strolling around on this planet shell because, as you say, that's a neato-burrito find (that's the technical term, I believe). Is there air? Or are you in a spacesuit? If there's air, we have a problem. You said this shell has a hole you inevitably fall through. How big is this hole? 2 meters across? (Why, that's no bigger than a womp rat). That means the atmosphere is linked to the vacuum inside the shell. I'll give you two guesses what happens next; it isn't pretty. The pressure from the atmosphere would rapidly push air into the interior of the shell using the hole as a massive Venturi tube. Not to mention the decreasing gravity on the way down would continue to increase the speed of the air molecules and, thus, pull air from the atmosphere faster. I'm no doctor, but I can tell you that would make a pretty big shockwave through the atmosphere. You probably wouldn't live through it (pfft! Not with THAT attitude!). If you did, what you'd find after an equilibrium is reached is that now the shell isn't empty. As such, not only would you have air resistance to deal with when you fall through the hole, but there would be a net gravitational effect inside the shell due to the mass of air it contains (albeit, not nearly as strong as the gravity outside the shell). The result? You aren't coming back out. You'll oscillate a bit and come to rest at the center of the sphere. Or you'll be annihilated when the atmosphere rushed into the shell, but let's not dwell on unpleasant things.

Okay, you say, what if I were in a spacesuit and there was no atmosphere? Phew. I've got just one problem now. You're now in a galaxy far far away, on a giant metal sphere about the size of a small moon that's mostly hollow inside and has a 2 metre shaft that leads directly to its core. You should expect regular gravity everywhere inside because, contrary to what the shell theorem says in this case, I'm fairly certain the Death Star had artificial gravity generators.

Take a baseball and put it at about ground level and drop it into the hole.

The gravity will pull on the ball and will accelerate and plunge through the planet, the void, and on it's way up again (or down from your perspective), gravity will slow it's ascent to the point that it'll just about make it to ground level on the other. The ball will spring back up(?) to you but it'll just make it out of your reach. If you let it fall back down(?) (here it comes again, and again, and again) it should eventually settle in the center of the hollow planet.

RIckRIck
9
$\endgroup$
2
Add a comment  |
Highly active question. Earn 10 reputation (not counting the association bonus) in order to answer this question. The reputation requirement helps protect this question from spam and non-answer activity.

3
A hollow planet
58
Is spacetime flat inside a spherical shell?
39
Would you be weightless at the center of the Earth?
18
If it was possible to dig a hole that went from one side of the Earth to the other...
17
Gravitational field intensity inside a hollow sphere

22
Gravity on a doughnut-shaped/Möbius planet
30
What nonlinear deformations will a fast rotating planet exhibit?
3
Keeping air in a well
19
Could there be a body of water the size of a planet?
2
Does the tension of a rope/cable change if acceleration/velocity changes?
0
Planet Sized Generator